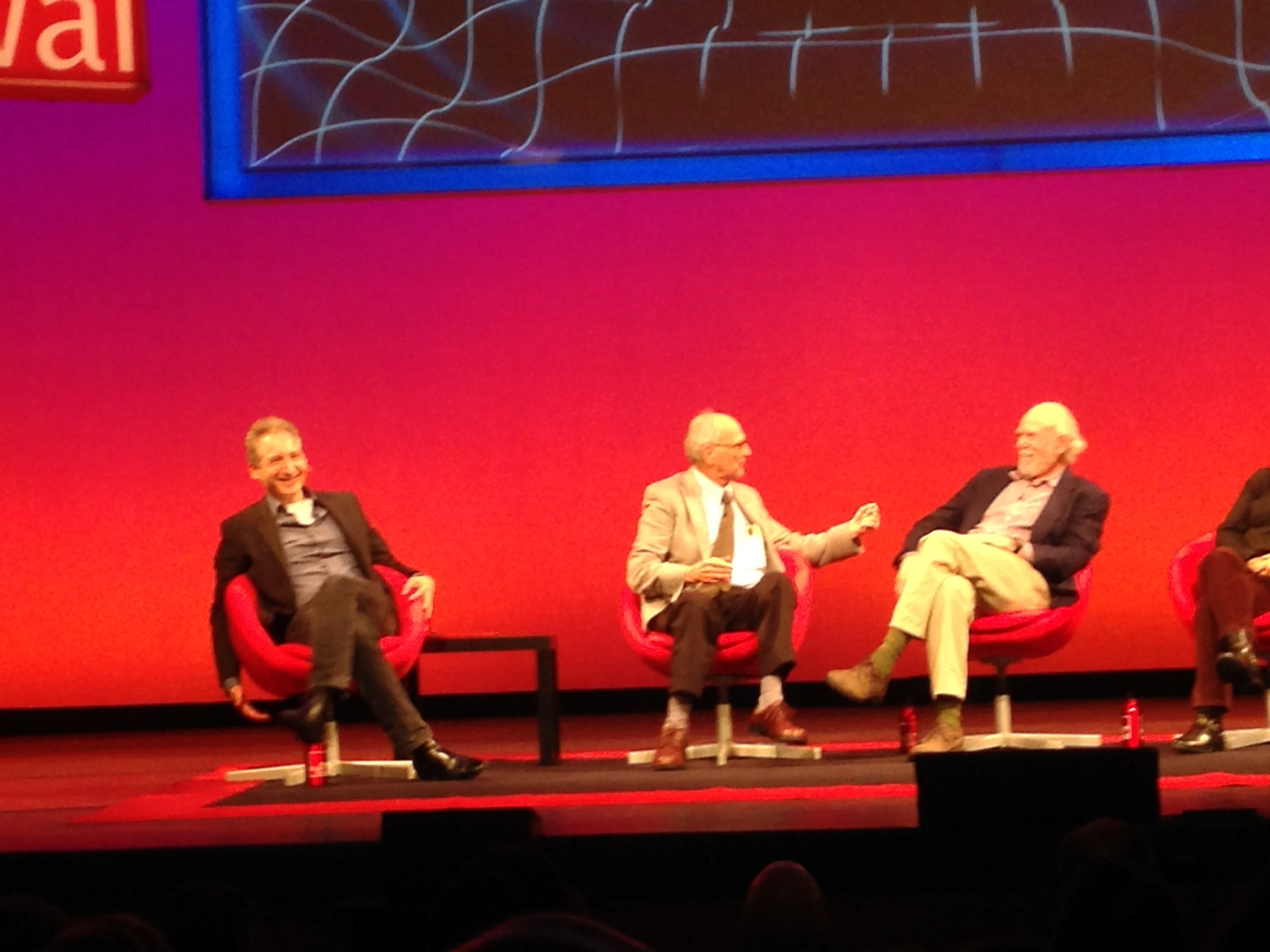 NYU is the home to the World Science Festival, a spectacular presentation of the current state of science – with panels featuring Nobel laureates, recent authors and TED speakers. The World Science Festival was founded by Brian Greene, and provides one component of education that is complementary to his World Science University.  I was eager to attend some of the talks at the Festival, and registered for the day-long sessions on Gravity, Waves, and an evening panel on Gravitational Waves.

The first session I attended was on the Triumphs and Mysteries of Gravity, and included a mix of presenters spanning theory and experiment. The session included hour-long talks with a chance to ask questions and an opportunity to meet some of the leading people in this field. Admittedly I knew (and had taught!) a lot of the material in this session, but my interests included seeing how this format works for informal education of interested public science aficianados, and a chance to learn a few tricks about how I might present some of these topics in coming days. I was also extremely excited to meet Rainer Weiss, who led the LIGO effort from MIT, and Barry Barish, who the Caltech counterpart leading the Advanced LIGO effort in the past decade. LIGO was one project I was offered by Rainer Weiss back when I was a graduate student thinking of attending MIT. It is great to see how well the project turned out – but I am not sure if I would have been patient enough to wait for results for 30 years!

The talks began with Justin Khoury from University of Pennsylvania. He talked about Dark Matter as a superfluid, and indicated that many of its properties can be explained in an analogy with the behaviour of liquid Helium – the most familiar superfluid. This includes its tendency to retain its shape after collision with another blob of superfluids – and he showed an amazing simulation of two colliding blobs of superfluid, that during the collision create interference patterns, and afterwards retain their exact shape. This behaviour is consistent with the look of the blobs of dark matter from the Bullet Cluster. He also did a brief rundown of MOND gravity theory, and explained that it phenomenologically works to explain rotation curves of galaxies, even though it breaks down in the context of the CMBR and for the cosmic web. This led him to speculate that if the dark matter of the universe is superfluid, there could be two types – one that would be below critical temperature in galaxies (explaining rotation curves) and another just above critical temperature in the larger expanses of space and the early universe. His talk was very thought provoking and engaging – and with the videos of liquid Helium made for an exemplary popular presentation on the topic.

The following talks were by Rainier Weiss, who did a great overview of the LIGO experiment, including its history and evolution over the past few decades. The use of higher intensity lasers (100 watts) and the amplification of the signal through extra mirrors to create a resonant cavity were very interesting, along with the presentation of how they detect the beat signal from moving mirrors using a form of spectral analysis of the light, was interesting. The detection at h=10-21 deformation is astounding – with the 4 mile length of the LIGO path, this amounts to 10-18 m resolution or 1/1000 of the width of a proton!  The detection of two 30 solar mass black holes merging and colliding at over one billion light years of distance sends chills down one’s spine!  Barry Barrish rounded off the morning with a discussion about particle detectors, and his plans for a new 11 TeV linear electron accelerator, which might be built in China. He explained how an electron positron collider provided a cleaner signal than the CERN LHC, which only can use one in a billion events since most of them are “glancing blows” between protons. The new accelerator he proposes will gather cleaner information than the LHC, and even though it probes the same energy range has a good potential for discovery.

During the second day I attended a fascinating day of discussions on the interface between biology, computer science, and physics entitled Chasing Waves from the Brain to Deep Space. This session featured speakers such as Sylvia Earle (oceanographer), Drew Endy (Stanford University synthetic biology expert), Nergis Mavalvala (MIT LIGO team member), Miguel Nicolelis (Duke University biomedical expert on neural implants), and Harold Varmus (Nobel laureate, and Cancer researcher). Their talks were very much like the “Fourth Industrial Revolution” set of topics – and raised urgent questions about the impacts of exploding technology, merging of science and engineering disciplines, and the consequences of science and technology on society and the environment.

I was especially interested in Drew Endy’s talk – he mentioned a number of fascinating features of the current biology that I was not aware of.  To motivate this new form of biological revolution – he urged that we not think of it as another “industrial age” but instead invoked the concept of citizenship as an alternative to consumerism. This was heightened by the video “Growing is Forever” – which shows some of the range of life on Earth, and his examples of living bridges in India, a company called Far West Fungi in Monterey that can build “bioblocks” full of living creatures that can be used to make living buildings, furniture, etc, and an amazing new student competition known as iGEM, where students build competing life forms using standardized parts of molecular biology to rearrange life for useful purposes.

First the expansion of technology, and speed and extent of DNA sequencing, which follows the Moore’s Law in its exponential growth. He provided evidence on the costs of sequencing genes, which follows Moore’s Law, and has fallen by a factor of 100 in just the past 10-15 years. He extrapolated this to indicate that by 2025 gene sequencing, encoding of vast amounts of information within DNA, and even biological computing could be routine and less expensive than we can imagine. He gave examples of biological computing in which genes can be switched on and off with nanowires, and then bacteria cells can be turned into glowing or not glowing cells at will.

I could write a lot more about this session alone – but should wrap up and also mention that the talks during the rest of the day featured an overview of coral reef bleaching and fish stock depletion by Sylvia Earle, an account by Miguel Nicolelis of using neural implants in monkees and rats to enable these animals to play video games with their brains, to operate robot arms and to sense infrared light directly with brainwaves. Miguel is also famous for training a paralyzed young man to kick a soccer ball, by inventing a technological prosthesis that included a brain wave monitoring device, and a set of sensors and tactile feedback devices so that the paralyzed can feel as they walk with the prosthesis. His work is showing that brain activity works in complex swarms, and that groups of neurons are needed to activate even simple motions in the body. But this complexity is a form of robustness, as the brain is capable of rewiring itself and configuring the sensory and cognitive neurons to adapt to brain implants as if they were natural organs. This work raises intriguing prospects for “enhanced” humans, avatar type experiences from remote mechanical bodies, and effective ways of enabling paralyzed people to rewire their brains and relearn how to walk. The final talk of the session was  by Nobel laureate Howard Varmus about the current state of Cancer Research and the potential to develop customized gene therapies to defeat cancer based on its individual genetic code. An amazing couple of days that really got me excited about the future! 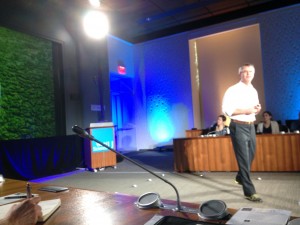 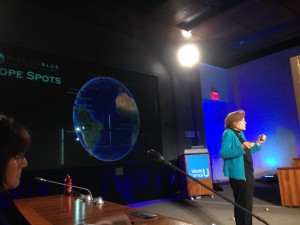 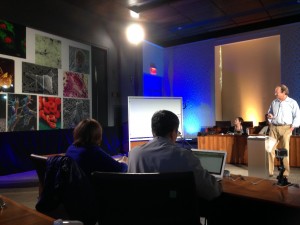 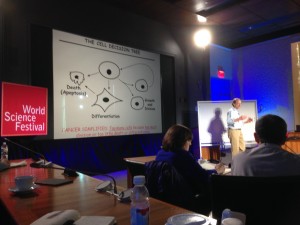 The last night was a panel discussion on the new era of gravity waves, entitled Gravitational Waves: A New Era of Astronomy Begins . This evening featured Brian Greene himself, as the host and moderator of a discussion among the top people in the field – including . He did a great job setting up the talk and reviewed General Relativity very effectively before interviewing the panel about their recent discovery. In between questions he had slick videos that played to highlight concepts and to show parts of the LIGO experiment. These videos in part came from a documentary being produced about LIGO, but also featured beautifully done visualizations of gravity waves, and animations of the Einstein Field equations in a good amount of detail. They also included a demonstration of interferometry on the stage – much like Brian Greene had done in his TV appearance with Stephen Colbert. All in all it was an amazing and very effective evening of science and I left feeling inspired and lucky to be involved in astrophysics research at a time when it looks like we are entering a new era!  Our Caltech ZTF project has great potential to discover optical counterparts of some of the gravity wave sources soon to be discovered, and I hope to be part of this research!

Some of my pictures from the World Science Festival at NYU: 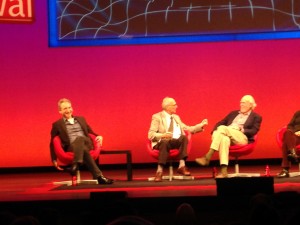 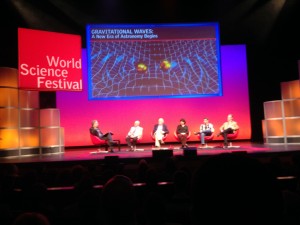 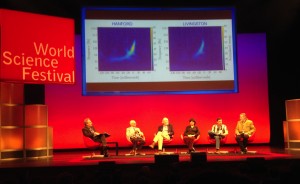 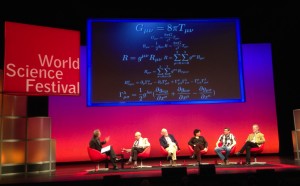 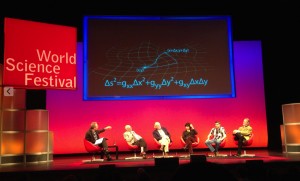 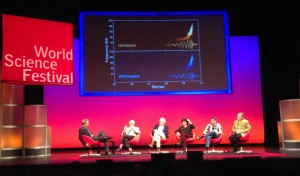 More information on the sessions I attended is below:

WORLD SCIENCE U FOR A DAY: Triumphs and Mysteries of Gravity

WORLD SCIENCE U FOR A DAY: Chasing Waves from the Brain to Deep Space