While at Yale-NUS College in Singapore, I was a member of the Yale-NUS College Foundations of Science teaching team. In 2014-15, I worked with Brian McAdoo to help launch the course for its first offering. In that year we had a fantastic experience with our 16 different units on a wide range of interdisciplinary science topics. We even took the entire class – 170 students – to Langkawi Island, Malaysia for an immersive weekend where the students cruised on the rivers studying mangrove ecology, measured shoreline erosion from a tsunami, did night hikes looking for rare frogs, visited the Malaysian national observatory and looked at the Milky Way, and did experiments on the beach measuring UV radiation and looking for mathematical patterns such as the Fibonacci Series in nature. You can read more about this trip at the Yale-NUS news release: http://www.yale-nus.edu.sg/newsroom/7-january-2015-yale-nus-students-explored-the-outdoors-in-pulau-langkawi/.

In the 2015-16 academic year I became coordinator of the class, and I worked with the teaching team to tighten up the disciplinary units, and to align them along theme groups. As a result we chose two themes – one was “Revolution” (disruptive technologies and disasters) and the other was “Evolution” (gradual change in nature from natural selection or physical laws). The instructors divided into two groups of four, and we also agreed to have these four groups of 20 students come together at the end in interdisciplinary teams. The teams would work in groups of four (with one student from each disciplinary group) to answer a “Grand Challenge” problem facing the world. They would then work to develop either a disruptive technology or innovation to address the challenge or to design a research study to measure and characterize the problem rigorously. For 2015-16 our Grand Challenge problem was expressed in two questions:

For the Revolution theme the Grand Challenge question is to:

“Design a new disruptive technological innovation that can be used to deal with one of the consequences of global climate change.”

For the Evolution theme our question is:

“What are some likely future adaptations of organisms and communities to the anthropocene?”

A more thorough outline of the course is below, giving the context and a description of the implementation. As part of my SoTL work I will be assessing the course during Sem. 2 of 2016, with a mix of survey data, and focus group interviews. 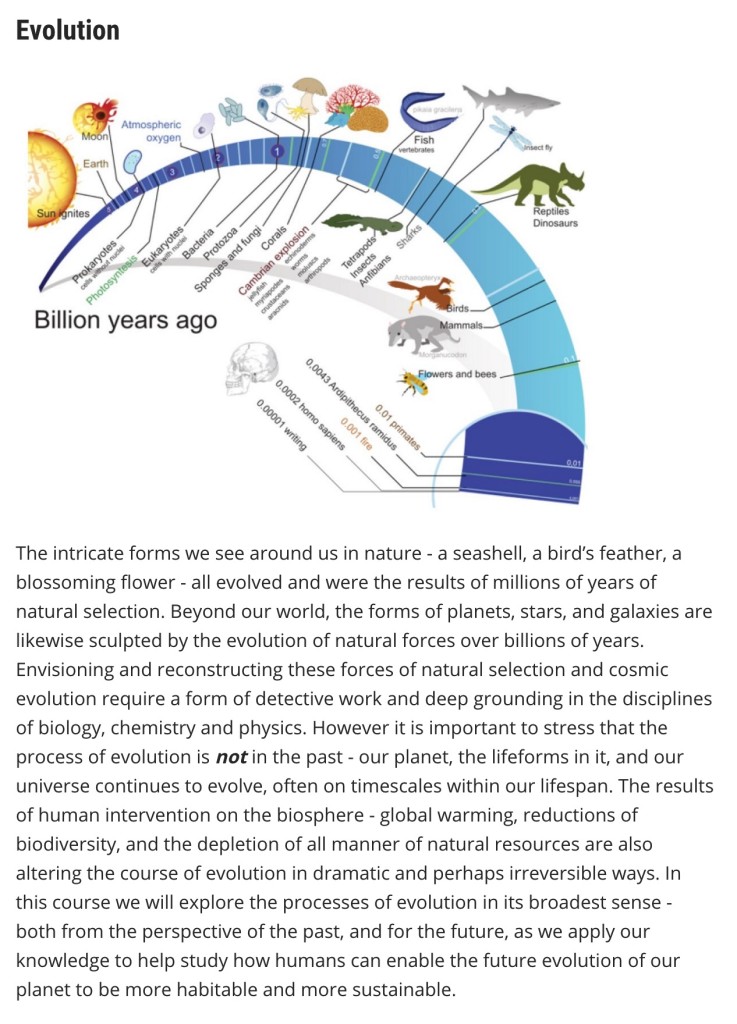 Foundations of Science – Background and Overview

Yale-NUS College has launched an ambitious common curriculum, which spans two years of undergraduate education in humanities, social science and the natural sciences. One of the key components is the year-long Foundations of Science course, which is taken during the second year by nearly all of the Yale-NUS students. Foundations of Science (FOS) is intended to be the main science course for non-majors in science, and is an interdisciplinary exploration of science that builds upon the work students have done in the first year of the common curriculum. Science is a critical part of the Yale-NUS Common curriculum, and the FOS course is the culmination of the STEM portion of the Common Curriculum. Like the rest of the Common Curriculum, FOS is being reviewed to determine its success with students in promoting learning and advancing their ability to be “informed citizens of the 21st century” as described in the Yale-NUS Common Curriculum report (Garsten et al 2013). The FOS course is in the middle of its second implementation and has been restructured to provide a common assessment framework, and a new “Grand Challenge” project at the end of the course.

FOS is a team-taught course – with eight instructors divided into two theme groups of four. Within FOS each of the four instructors offers a 5-week “disciplinary case study” aligned within a theme area. Students take two of these 5-week case studies from their instructors, and then groups of four are assembled to tackle the Grand Challenge problem. The entire teaching team of eight professors meets on a bi-weekly basis to plan and review the course. The four units in each of the two theme areas are taught at the same time, to enable students to sample two of the four offerings during the semester.

For the FOS implementation in academic year 2015-16, the two themes of the course are Evolution (the study of gradual change within the world through the laws of physics, chemistry and biology) and Revolution (the study of sudden disruptive change through both disasters and disruptive technology). The Evolution theme units are taught by instructors from the disciplines of Field Ecology, Biology, Chemistry and Astronomy, while the Revolution theme units are taught by instructors in the disciplines of Earth Science, Physics, Computer Science and non-technology.

A listing of our instructors for the eight units within the two theme areas during Fall 2015 is below:

The Grand Challenge problem was designed to enable students to apply what they have learned in the disciplinary case studies to a new context, which is rooted in their experience and relevant to the future of society. The students are combined into diverse teams, including one student in each of the four discipline areas. The teams are asked to design a technology or research program to address the theme question. These Grand Challenge questions are listed below for each of the theme areas:

For the Revolution theme the Grand Challenge question is to:

“Design a new disruptive technological innovation that can be used to deal with one of the consequences of global climate change.”

For the Evolution theme our question is:

“What are some likely future adaptations of organisms and communities to the anthropocene?”

Each of the teams then are asked to design their own research program in the case of Evolution students, or to invent their own “disruptive technology” in the case of Revolution students. During Semester 2 of 2016, we offer the second semester of FOS in which students will reverse themes, and take two additional disciplinary case studies. The second semester will feature a slightly different mix of instructors and topics, but within the same framework, and with a second Grand Challenge at the end of Semester 2.