The new Zwicky Transient Facility (ZTF) has been funded by NSF to help upgrade the Palomar Observatory telescopes to provide an integrated system for detection of time-variable sources which otherwise would not be visible. The PI, Shri Kulkarni, has optimized the three telescopes at Palomar Observatory to survey the entire sky on a regular cadence to reveal the presence of new supernovae, variable stars, asteroids, gamma-ray bursts, and also exotic sources that represent entirely new classes of astrophysical objects. This system was known as the Palomar Transient Factory (PTF), and discovered literally millions of time-variable sources. The success of that project prompted the NSF to fund our group with $9-million to enable the development of a new camera for the Palomar 48-inch Oschin Schmidt telescope, and an integrated data analysis pipeline to reveal over 100 times more sources in the same time. This new project was named the Zwicky Transient Facility after Fritz Zwicky, a long-time professor at Caltech who cataloged and discovered thousands of new galaxies and was one of the first discoverers of dark matter. 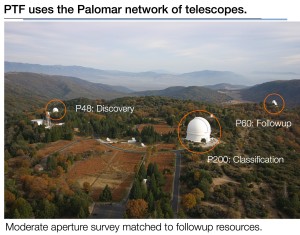 The Palomar Observatory, showing the roles of each of the telescopes in the automated system for discovery of new sources and followup. The 48″ Schmidt telescope discovers variable sources, which are confirmed by the 60″ and then more detailed classification spectroscopy is possible with the 200″ telescope. 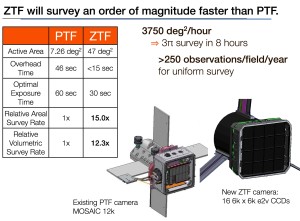 The new camera for ZTF which will be able to examine nearly the entire sky in 8 hours! Its enormous CCD footprint on the sky – 47 degrees – makes it one of the most efficient cameras for mapping the sky ever developed.

My role in the project is to develop new research programs for undergraduates and to integrate some of the undergraduate research and educational efforts into the larger community of astrophysics researchers. The hope is to have the ZTF not only discover new sources, but to provide an unmatched platform for training the next generation of instrument scientists and modern time-domain astrophysicists. Within the new types of sources discovered by ZTF are entirely new astrophysical phenomena, and these discoveries also give exciting new opportunities for curriculum development and for outreach. The creation of a global network of telescopes also opens up new modes of astrophysical research that includes teams of astronomers across the earth working together to discover and characterise mysterious new sources in the night sky.  In September 2015, the NSF awarded $4.5million to create this global network known as GROWTH, and this new grant from NSF will fund international research, with undergraduate international research fellowships, exchanges of postdoctoral researchers and scientists, and new global observational astronomy courses. 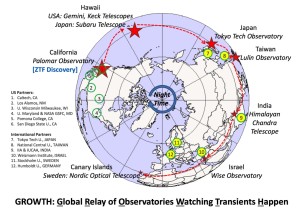 The Global Relay of Observatories Watching Transients Happen (GROWTH). This network of observatories will create a global telescope network for characterizing the ZTF sources after discovery, as well as opening up unmatched opportunities for international collaborations, exchanges of researchers and students, and a chance to create a new global community of time-domain astrophysics research. 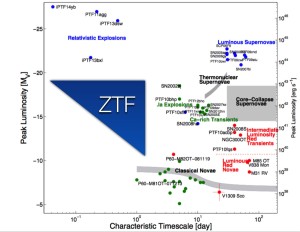 The discovery space for ZTF. The region in the blue triangle shows the range of luminosity and time-variability for which the newly created ZTF camera will be sensitive. Like PTF, ZTF will discover entirely new classes of variable stars, novae, gravitational lenses, and other astrophysical objects.

The Zwicky Transient Facility (ZTF) is a new time-domain survey that will have first light at Palomar Observatory in 2017. Building on the highly successful legacy of the Palomar Transient Factory (PTF), ZTF will use a new camera with a 47 square degree field of view mounted on the Samuel Oschin 48-inch Schmidt telescope. ZTF’s extremely wide field and fast readout electronics will enable a survey more than an order of magnitude faster than that of PTF.

By scanning more than 3750 square degrees an hour to a depth of 20.5-21 mag, ZTF will discover a young supernova less than 24 hours after its explosion each night and search for rare and exotic transients. Repeated imaging of the Northern sky (including the Galactic Plane) will produce a photometric variability catalog with nearly 300 observations each year, ideal for studies of variable stars, binaries, AGN, and asteroids.

ZTF is supported by a collaboration including Caltech, IPAC, the Weizmann Institute for Science, the Oskar Klein Center at Stockholm University, Deutsches Elektronen-Synchrotron, Los Alamos National Laboratories, the TANGO Consortium of Taiwan, the University of Wisconsin at Milwaukee, and Lawrence Berkeley National Laboratories.

From the joint Caltech/Pomona press release of Sept. 2014:

The search for near-Earth asteroids, supernovae and other exploding space phenomena just got a huge boost with Southern California’s Zwicky Transient Facility (ZTF) receiving a $9 million grant from the National Science Foundation.The grant will pay for renovation of the 48-inch Oschin Schmidt telescope at the historic Mt. Palomar Observatory, a more powerful camera and enhanced software analysis capabilities. Having already discovered thousands of exploding transient objects, with the improvements, the ZTF will be able to observe objects 10-times fainter, in a section of sky that’s almost four-times as large, than the system can currently detect.

Led by the California Institute of Technology, the ZTF has conducted large sky surveys, since 2009, to discover rare, celestial objects and events that vary dramatically in brightness or location over short amounts of time, such as the brilliant but fleeting flash of a supernova, gamma ray burst or the rapid movement of an Earth-grazing asteroid.“Each night, the ZTF observes sections of the sky at different times and, with an automated system, sifts through terabytes of astronomical data to identify changes and interesting events,” explains Shrinivas Kulkarni, principal investigator of the ZTF survey and a Caltech professor. “When something unusual is found, we then access some of the world’s most powerful ground-based telescopes to conduct immediate follow-up observations of fascinating phenomena as they are identified.” (– based on a 2009 quote)

Bryan Penprase, a professor at Pomona College and a co-principal investigator on the grant, notes that “in astronomy, you usually think of everything in the sky as being eternal and unchanging, that’s what the Greeks were all about. In fact, there are many things blowing up. Palomar is now being optimized for seeing these time scales and faint things that have been missed in all the other efforts of the last century of astronomy.” An important part of the grant will go to Pomona College and Caltech to create an annual summer institute to train students from across the U.S. and at partner institutions in the latest astronomy instrumentation skills, large sky surveys and data analysis software. The institute will give students access to sophisticated telescopes and instruments typically reserved for more senior researchers, offering them a taste of the excitement of discovery that is the core part of the scientific process.

“These undergraduates will be controlling some of the largest telescopes in the world and helping build a cutting-edge facility,” explains Penprase. “It will be really exciting, because the technology is so advanced, and the discoveries are so common. In just one night, the ZTF can discover dozens of new sources. It’s just an incredible thing for a student to be able to say, ‘I discovered that thing in the sky that no one else has ever seen before.’” Both Pomona’s new Planetarium and Caltech’s Mt. Palomar will also be important locations for sharing the discoveries of the ZTF with the public and with students.