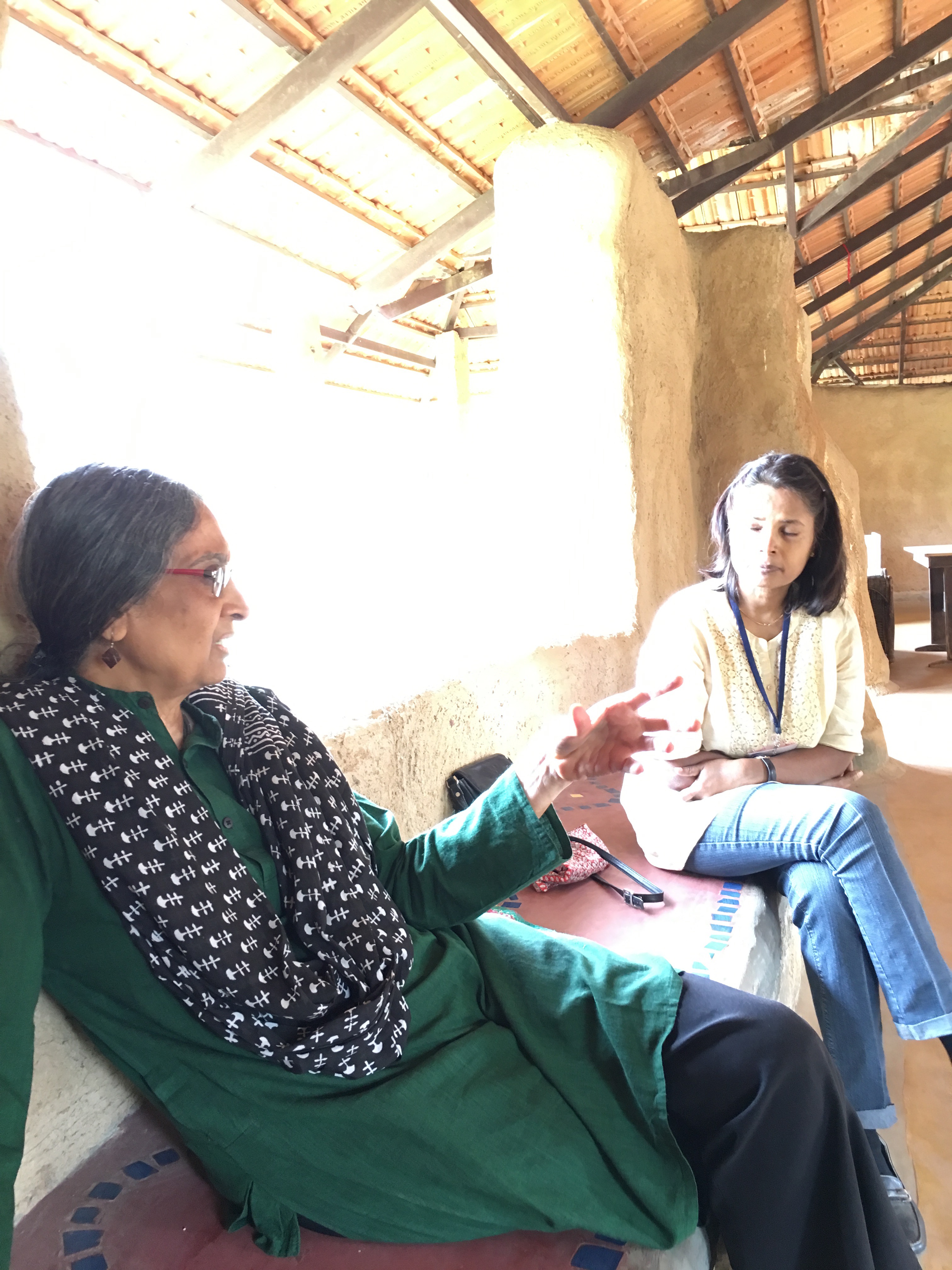 As part of my ongoing series of discussions at the Raman Research Institute (RRI), Bangalore, I visited Bangalore to meet with my long-time collaborator on the Future of Liberal Arts in India, Dr. Lakshmi Saripalli, and to discuss our many projects together – both in astronomy and in liberal arts education. The visit to Bangalore was from September 15-18, and included a chance to discuss science education with Lakshmi, and with some of the visitors at the RRI. My timing was interesting as it coincided with visits from the Raman Research Institute Academic Committee, and as a result I had a chance to talk with many of the leading science educators during breakfast at RRI. These included a panel looking into the graduate fellowships at RRI which included Gauta Menon from the Madras Institute of Mathematical Sciences , who is a leader in India in science education (http://www.imsc.res.in/~menon/). Prof. Menon was very interested in talking about the new Yale-NUS College, and we discussed the new Indian Institute of Science Education and Research (IISER) institutions within India and some of the initiatives he is doing in physics education. Gauta told me about some online videos he has been making to promote simple laboratory experiments in physics, and we were both excited about the rise of IISER institutions in India and new institutions like Yale-NUS to help promote new forms of education that are tied to more authentic assessments that enable students to gain experience, fieldwork, hands-0n research, and other non-lecture based learning in their education. We also discussed the rise of “bio-inspired engineering” and how it promises to revolutionize biology. His own research is on creating new mechanical devices that are inspired by biological mechanisms on the molecular level. In the process of our discussion he connected me with Sunil Mukhi, the head of physics at the IISER in Pune (where I was visiting a few days later!). We agreed that I should come to visit Chennai on my next trip to India and we can talk more about these topics.

The discussion about bio-inspired engineering carried over into deeper discussions about environmental education and the need for India to develop new awareness about the environment as it continues to develop and grow its economy. Lakshmi is active with a number of foundations in Bangalore working on developing this kind of awareness. During the visit we visited two sites – the Indian Institute of Human Settlements  (IIHS) – where a meeting of local environmental activists and thinkers were discussing “Trashonomics” with an enthusiastic audience. The group included several who have been increasing the awareness of the need for recycling within India, writing children’s books on the topics, developing a movement for composting food waste, and in general promoting a more sustainable form of economic growth for India.  IIHS itself serves a very important role in studying human settlements in India and blending ground-based socioeconomics research with additional “big-data analytics” from satellites and demographic databases. 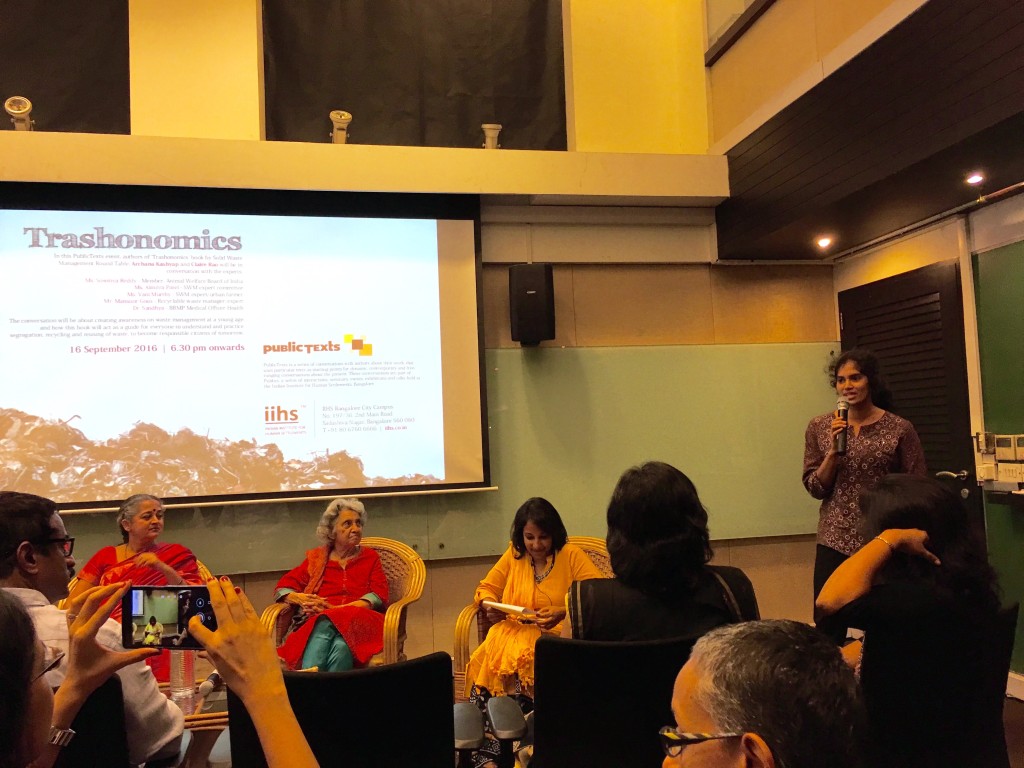 A talk on “trashonomics” at the Indian Institute of Human Settlements 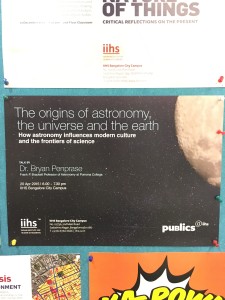 Some Posters at IIHS – including one from my earlier talk at IIHS from April 2015!

Lakshmi and I also visited the campus of Bhoomi College (http://www.bhoomicollege.org/), a new university on the edge of Bangalore that also runs the Prakriya Green Wisdom school for children. The Bhoomi College has one year postgraduate diploma programs in Holistic Education and Science and Management for Sustainable Living. Many of the students in the program are recent college graduates or technology employees who want to help reform some of the environmental and educational policies within India. The Bhoomi College and its school are creating a learning community where environmental responsibility and simple living are at the core. Their motto is adopted from Mahatma Gandhi – “Live simply so that others can simply live” and they have created a beautiful and sustainable campus that includes farms, passively cooled buildings made from very low-cost materials such as sand-bags, low-cost concrete, recycled construction materials, and in many cases include open windows for air circulation and natural earth floors. The Bhoomi group also sponsors a wide variety of thought-provoking events, linking to long traditions within India, discussing the cultures of tribal people in India, and develop new forms of gardening, diet and architecture. Their magazine (http://bhoomimagazine.org/) covers a lot of these topics in great detail. 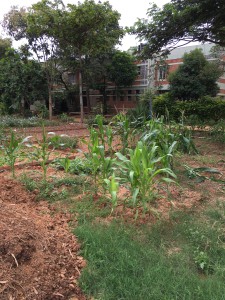 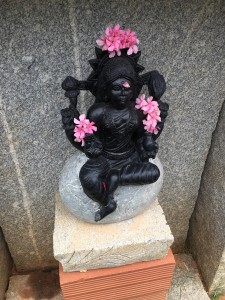 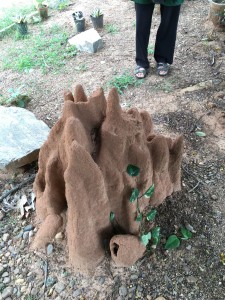 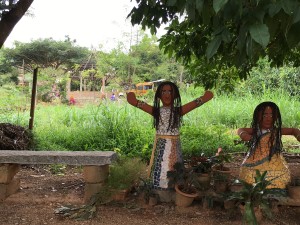 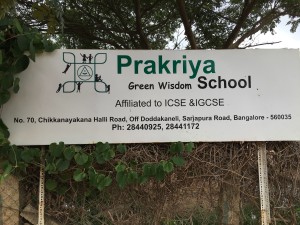 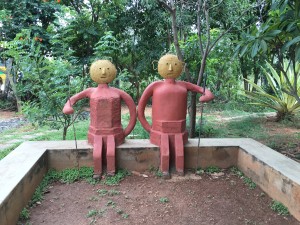 While at Bhoomi College we had a chance to meet with Seetha Ananthasivan, the founder trustee of K.N.A.Foundation and Bhoomi College. She has been working in the fields of ecology and Ecological Education and is the editor of the Bhoomi magazine and the Founder of Aastha Foundation (aasthafoundation.org) and Prakriya Green Wisdom School (prakriyaschool.org). Seetha showed us the campus and explained how it was built, and how the simple and environmental living is imparted to students at the school. We also discussed the impacts of globalization on people in India and the larger region, and how many of us who benefit from globalization are unaware of the environmental impacts we are having.  The discussion was very thought provoking, and Lakshmi and I returned to RRI very impressed and hopeful about the new wave of interest in environmental education in India. 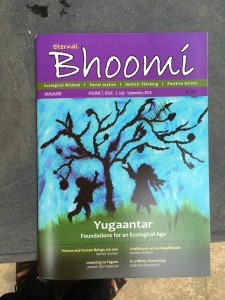 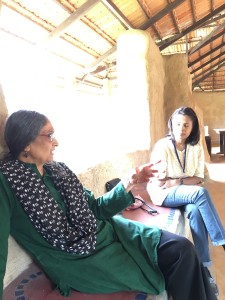 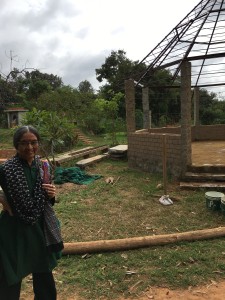 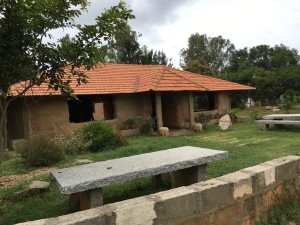