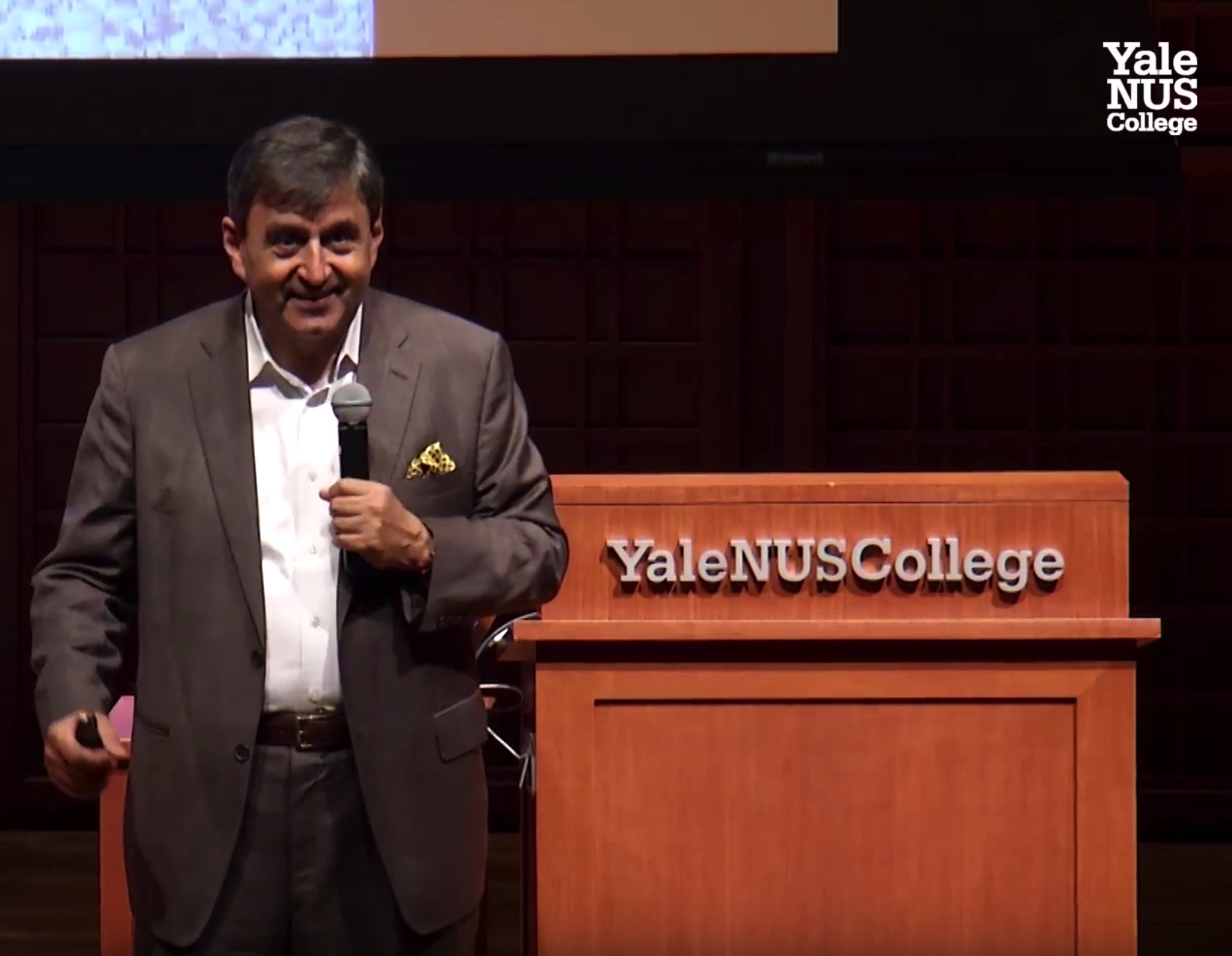 During August 22-24 I hosted Harvard University professor Eric Mazur at Yale-NUS College in Singapore. His visit was sponsored by the Yale-NUS Center for Teaching and Learning, and Eric delivered two wonderful talks on Teaching and Learning to our community, which included a wide range of Yale-NUS Faculty and nearly 100 professors and academic leaders from across Singapore. His talks are now online at our Yale-NUS College CTL web site, and included a talk on August 22 entitled “Confessions of a Former Lecturer” and a talk on August 23 entitled “Flat Space, Deep Learning.”

Eric Mazur is an amazing person and very nice fellow – who somehow manages to perform at the highest level in three separate fields – physics research, educational research and entrepreneurship. His C.V. in any one field would be at the top percent or so in the world – but he somehow manages to do all three!  He has over 300 publications, including a recent cover on Nature Photonics about his zero refractive index material that enables the phase velocity of light to approach infinity!  He has at least 36 patents and 4 books, and is a member of countless honorary societies and the incoming President of the Optical Society of America. His primary focus for our visit to Singapore however was his educational work – which includes his pioneering contributions on peer learning (resulting in the book “Peer Instruction – A User’s Manual), and his educational research on how to increase student engagement by interactive work within classes. He also discussed during his visit his Physics course, AP 50, which combines team-based and project-based learning to create a course where students are able to learn physics through intrinsic motivation and curiosity – instead of exams and problem sets.

The first talk, “Confessions of a Former Lecturer,” was a chance to review some of the data and experience in how education over the past 1000 years has evolved from a professor in the front of the classroom speaking to, well, just that – a professor talking in front of a classroom!  Despite the fact that information technology has lept forward to provide immediate online content delivery of everything – most instructors are still lecturing!  Eric pointed out that this information gathering function of class was obsolete and that those who continued to persist with this form of education might soon see themselves out of a job.

This led to a deeper discussion of what exactly constituted education. Eric posited that it was the combination of the social experience within a group and the ability to construct knowledge based on answers to questions worked out individually, then in groups. He demonstrated a wonderful technique that requires absolutely no technology. This involved looking at the concept of thermal expansion and deciding whether a plate with a hole in it would expand such that the hole got bigger, smaller or stayed the same size. Ordinarily people would not care much, but since he worked with the group with his techniques – we all were dying to know the answer!

The technique he used was to have us all think first; then to provide individual answers first with fingers indicating the answer on our chest. This emphasis on requiring us to THINK – something not always asked of students – was a welcome contrast from lecturing where very little thought is needed. The technique then has us each discuss our answer with neighbors who did not get the same answer, then we would re-answer with our fingers – a very low-tech technique indeed, but one that got everyone deeply emotionally vested in the answer!  Eric explained that this technique works very well, and requires only about 30% of the people in the audience to get the right answer in the first round to be effective. The trick is to have questions that are difficult enough that the discussion is necessary and changes minds. If 80% get it right first then the exercise won’t work – nor will it if only 10% get the answer right. 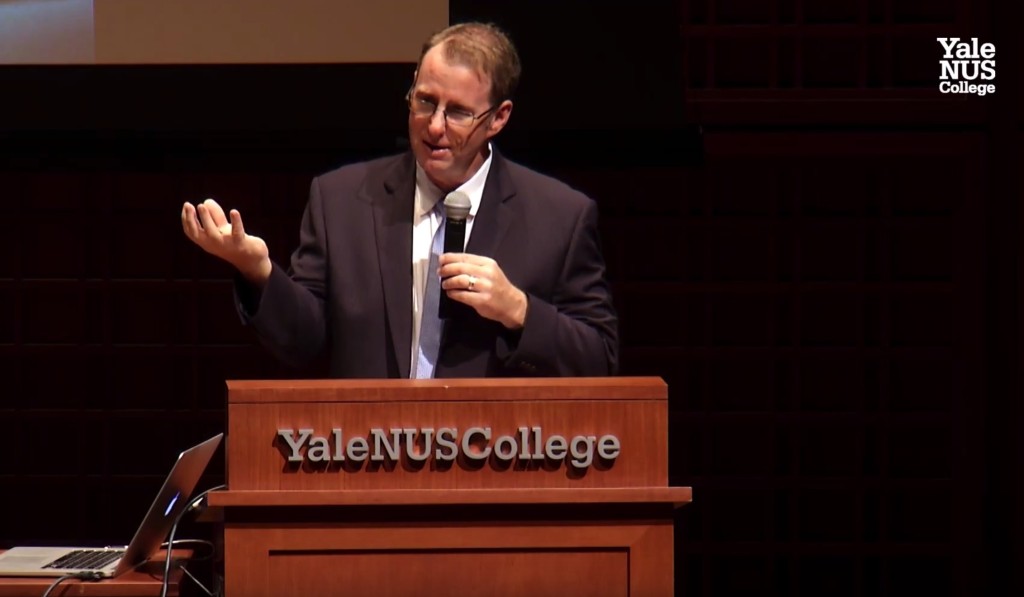 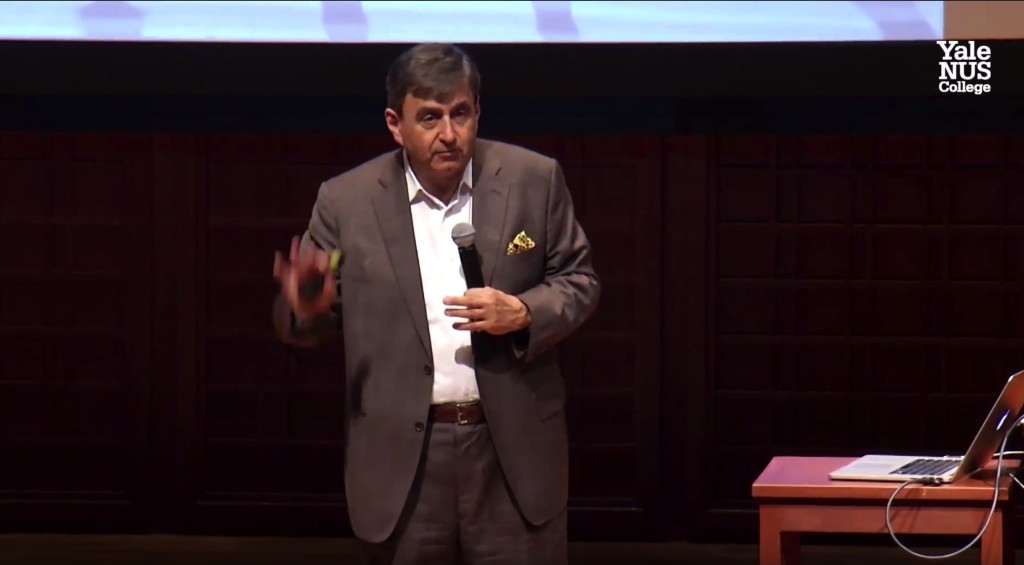 Eric Mazur in action – as he develops the idea of class time as a place to think – instead of passively listening! 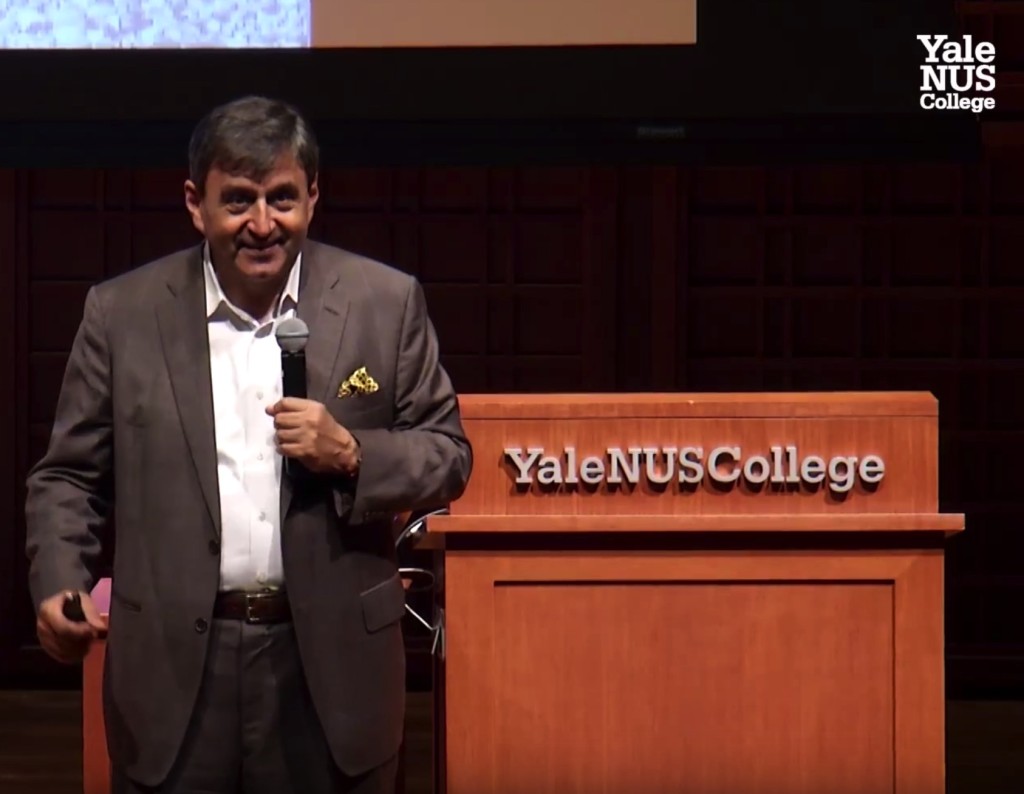 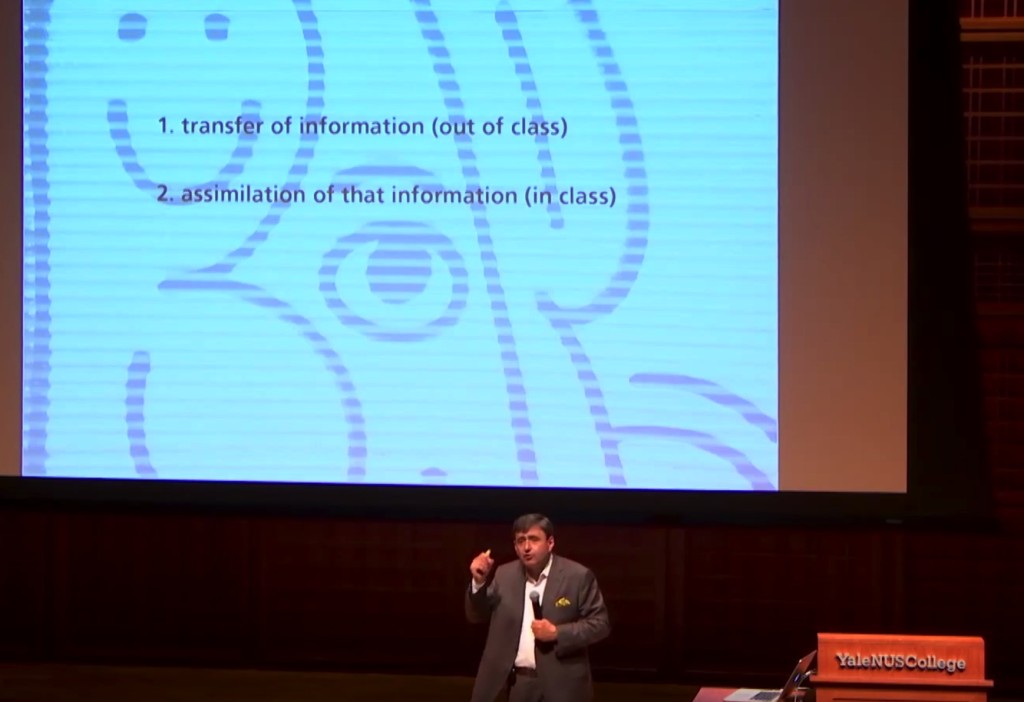 The second talk was about “Flat Space, Deep Learning” – and explored Eric’s development of a course known as AP50. It was his antidote to lecturing, and embodies multiple educational philosophies, and higher-order learning goals. Eric developed this course during a year-long sabbatical in which he reinvisioned how he approached teaching, and he is a big advocate of this kind of sabbatical, which is now being fostered by his new “think tank” at Harvard where visiting scholars can design new courses, and reinvent how they teach. 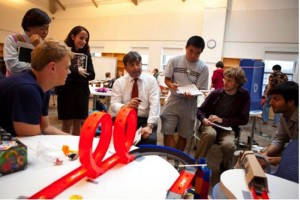 You can see a nice article on this class at the Harvard web site (https://www.seas.harvard.edu/news/2013/09/in-ap-50-students-own-their-education). The goal of having students “own their education” and move through intrinsic motivation is apparent in the enthusiasm and enrolment growth in the course. The team-based aspect of the course encourages a “social responsibility for the learning.” The projects were designed to be difficult enough so that you needed your team to accomplish them! Eric described these goals and how they informed the course design through the “backward course design” method. He also encouraged us to look at the materials for the course which are online at the site – http://bit.ly/ap50visitor. 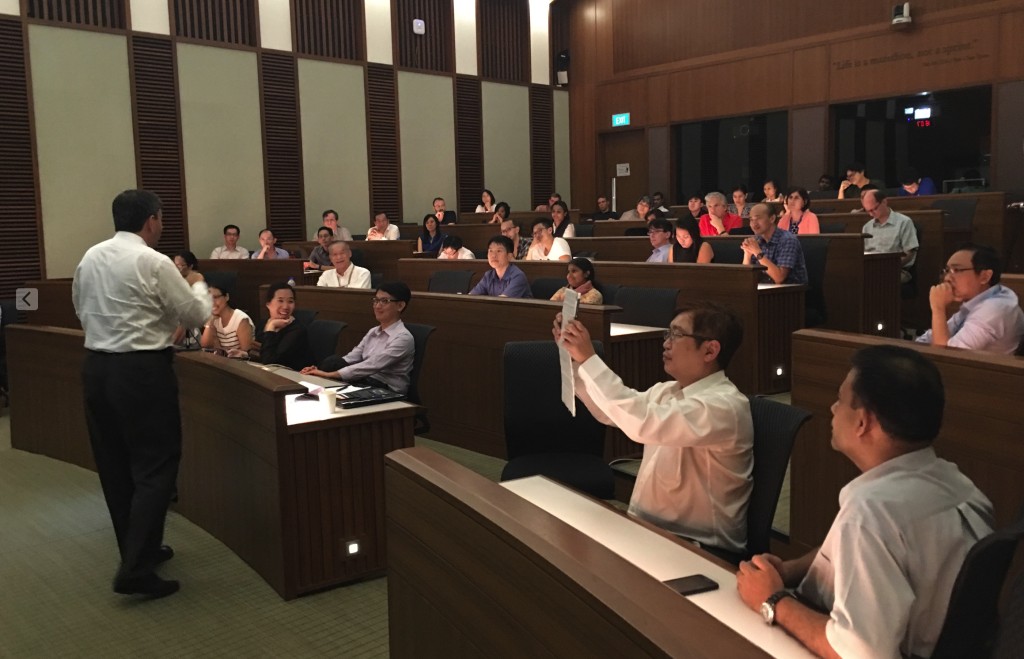 One key element in the course was his “21st century classroom” – which interestingly includes very little fancy electronics. Instead this classroom, which was wrested out of half of the floor of a library reading area, includes a large number of rolling tables and chairs to create 8-10 groupings surrounded by rolling white boards. The room has been designed so that “everything is on wheels” – and requires students to work together, and instructors to circulate to provide ideas and to help the groups accomplish their goals.

Within the teams are a diverse group of students, who are NOT chosen by the instructor, and who are mixed about in six separate projects during the year. Each project takes about a month, and includes a Drag Race, a Rube Goldberg project, A Symphosium (where students build and test musical instruments for Venezuala’s Il Sistema), and for E&M projects, Eco-tricity, a Crack-a-Thon, and an InSPECT fair. Each of the projects includes the same set of steps – which teaches the students about working in groups and cooperating as one of the primary goals. A project will have 1). a team contract – “who does what? how to resolve difficulties” and then this leads to 2). A proposal – which is read by the instructor team to temper expectations. Once the project is proposed it is executed and presented at 3). A fair – which is a public exposition of the work that heightens the social experience and makes the project fun and visible on campus. After the fair the students will provide 4). A Report – which is revised from its first draft and 5). a team, peer and self assessment. 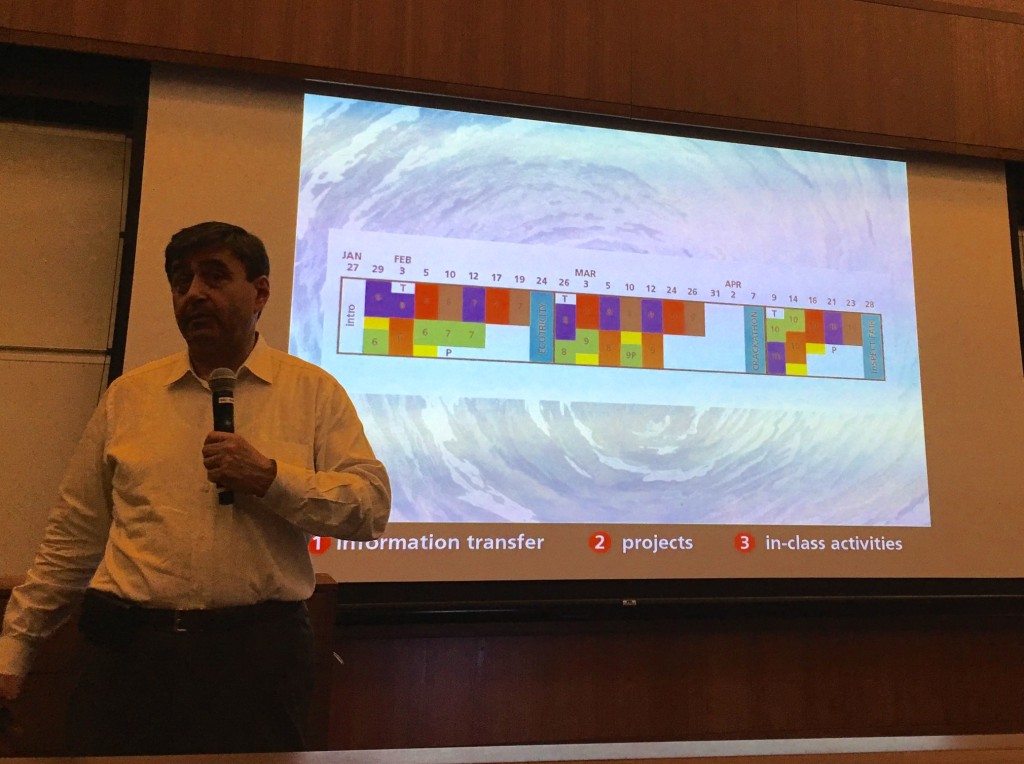 The class time is partitioned into interactive peer learning, estimation activities, experimental design, problem set and reflective problems, and other activities designed to build expertise and scaffold the projects. Overall 2/3 of the project is scaffolded, and the final 1/3 of the month is unguided, allowing the students and the instructor staff to interact. One unique feature of the course is the homework which includes problems that are answered in several parts: first a “getting started” section that gives and overview of how the student first thinks about how to proceed, then a “plan” section that outlines how this solution would be derived, and then an “execution” section where the plan is implemented, and an “evaluate” section which estimates the accuracy of the answer. The nice part of all of this is that students are able to find their own solutions, and gain an awareness of the process by which they work – producing “meta-cognition” so necessary for learning. The other benefit is that students are fully owning the products of the work – and this greatly improves their engagement and self-efficacy.  The course was amazingly interesting – and inspiring – and I am hopeful that we can implement a project-based course of this type at Yale-NUS in the near future! 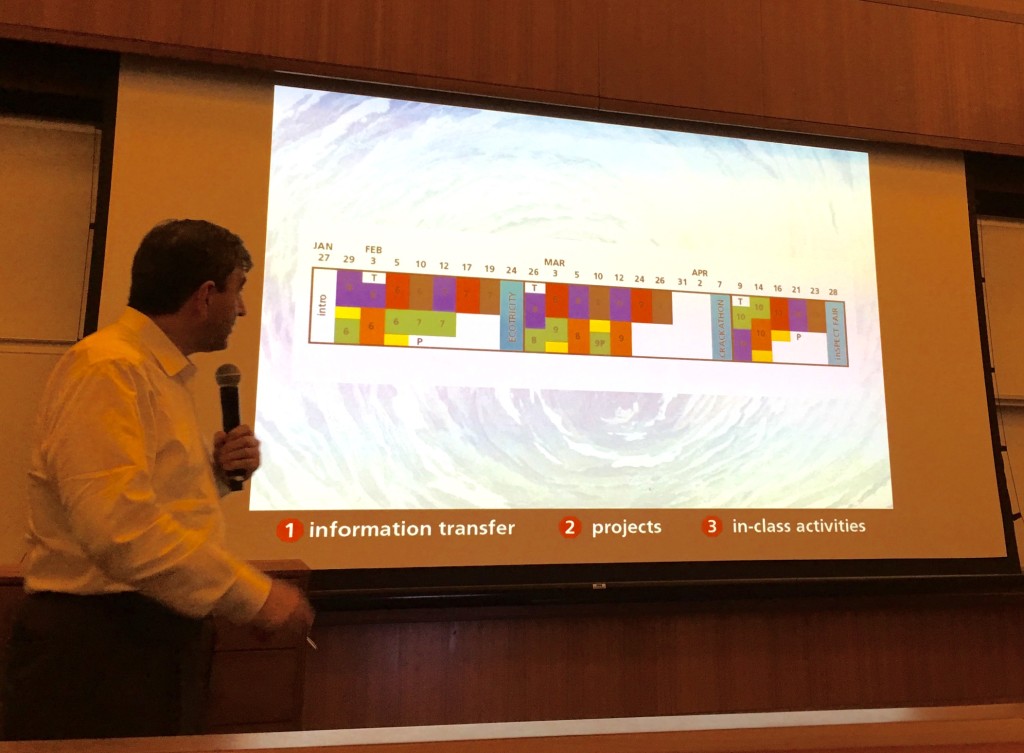