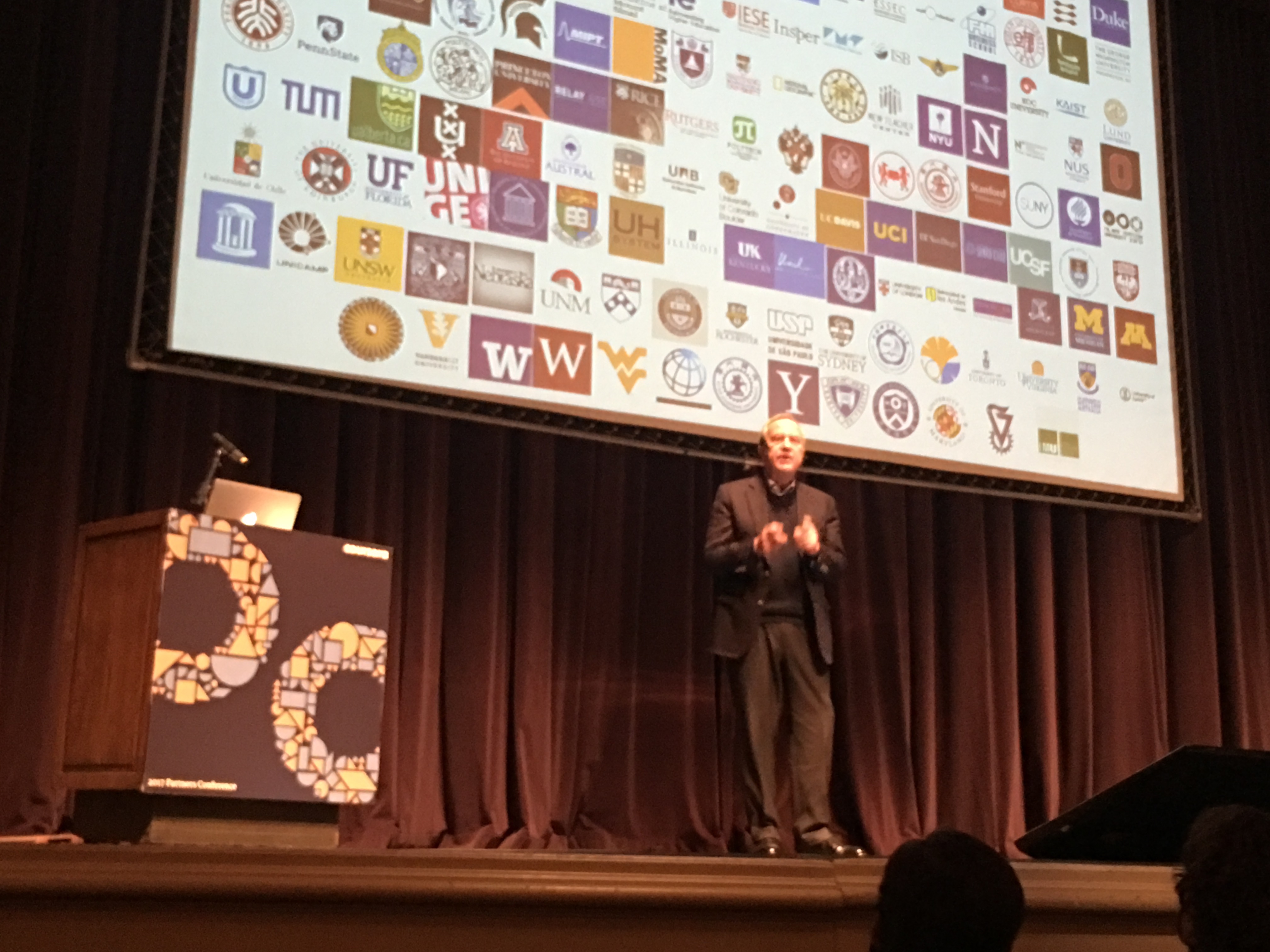 On March 28-31 I had the opportunity to represent Yale-NUS College at the Coursera Partners Conference in Boulder, CO. Richard Levin, the Coursera CEO, suggested that I attend, as I was planning to work with him and Coursera during my scheduled sabbatical for Fall 2017. The meeting included all the leading online course developers, and offered a chance to glimpse some of the ways in which online courses and technology are shaping education at larger universities across the world. The MOOC has come along way since it began around 2012, and new formats that integrate in-person instruction, artificial intelligence, and that offer course credit or micro degrees have added a new dimension to the online learning experience. 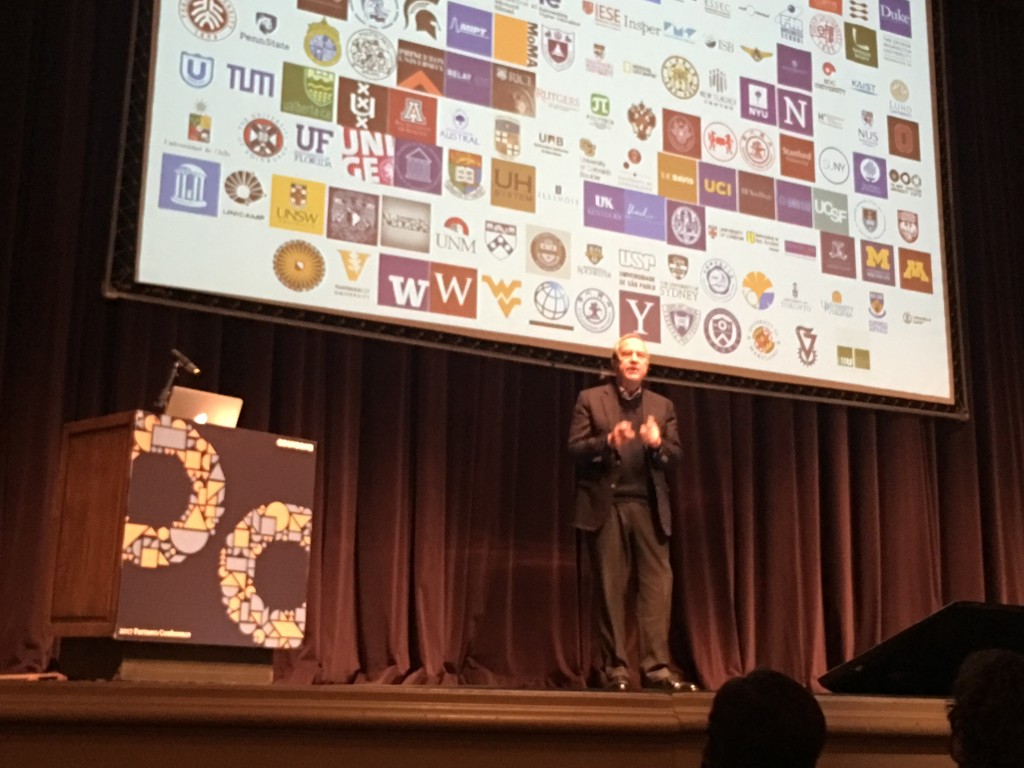 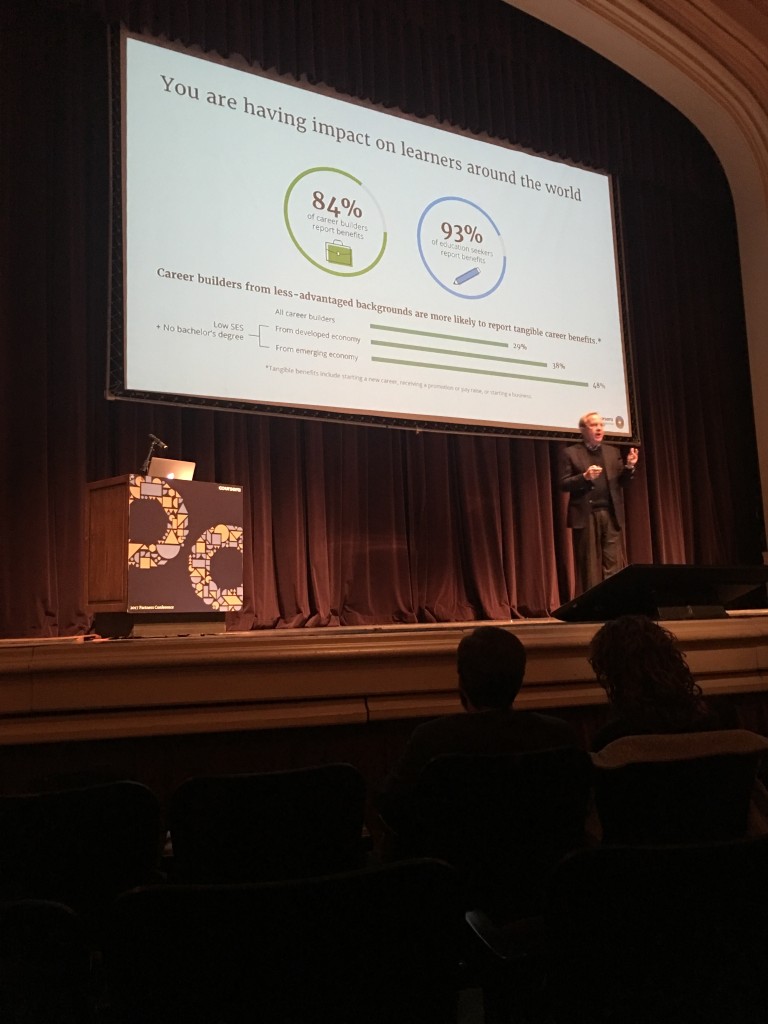 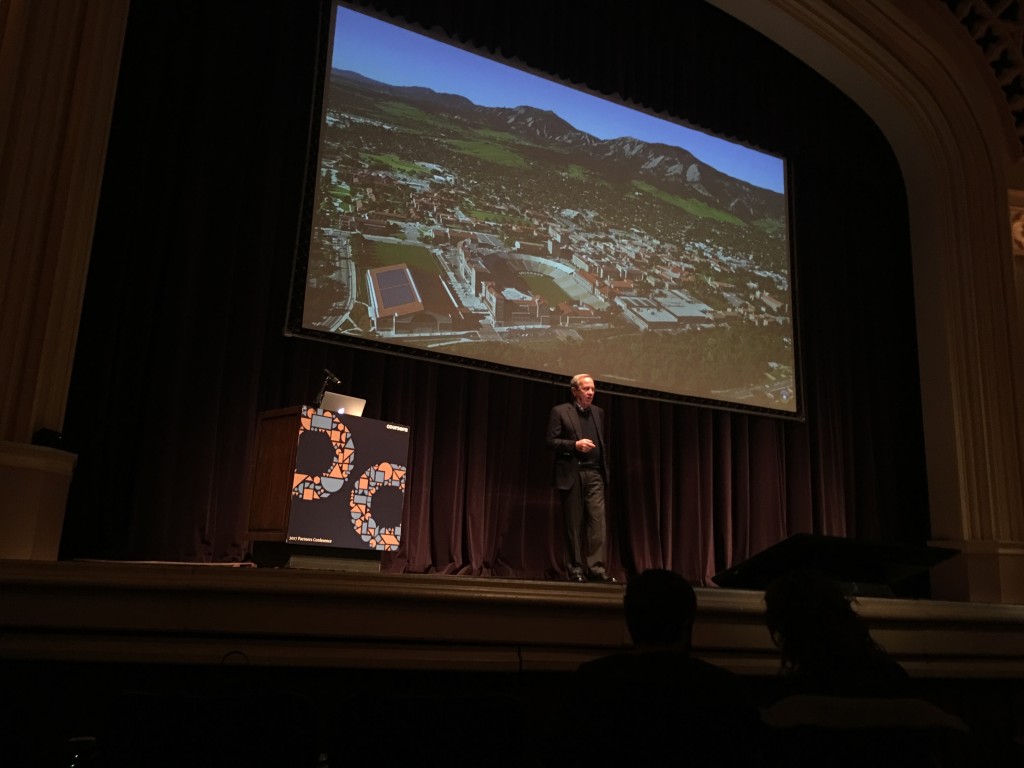 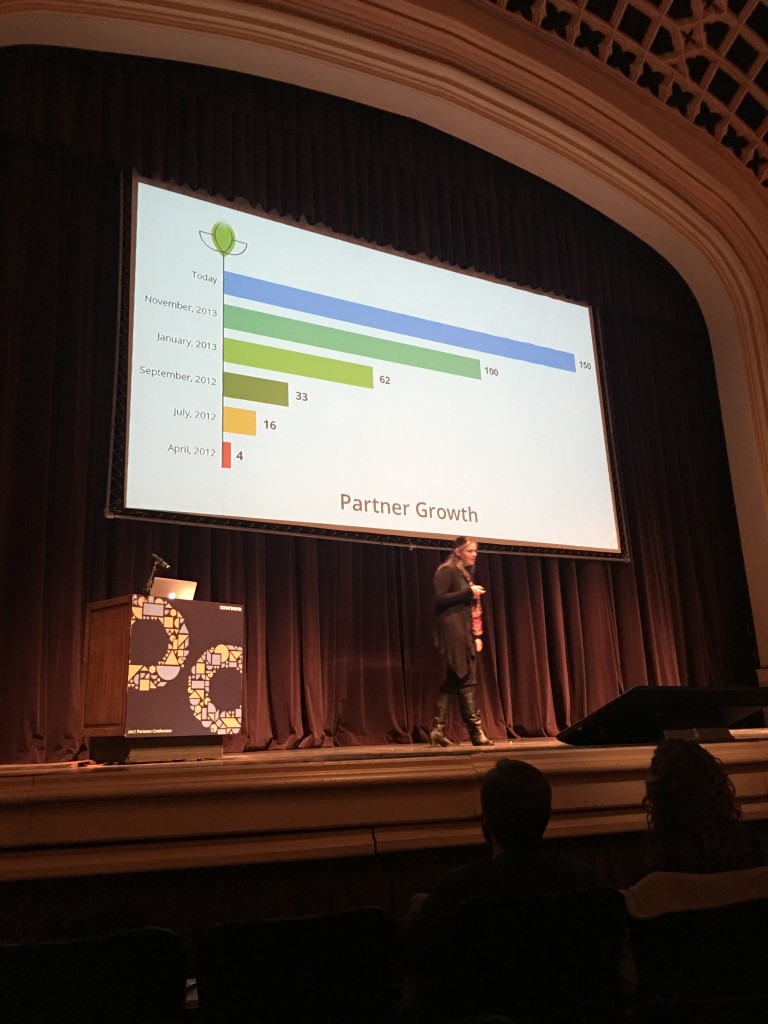 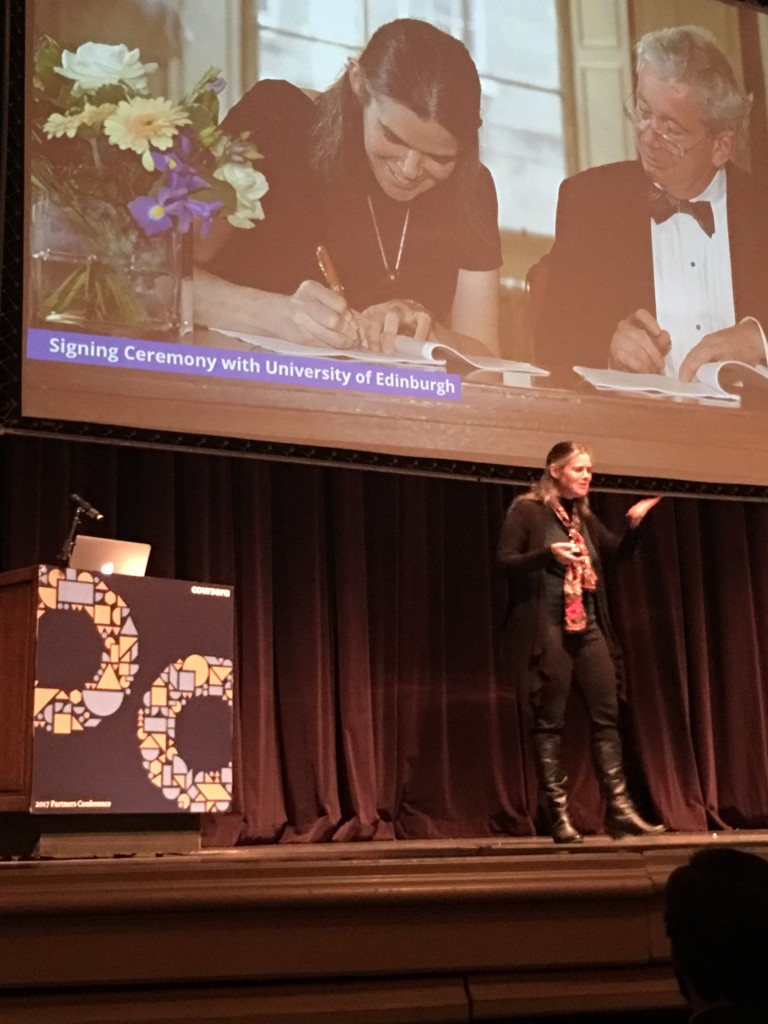 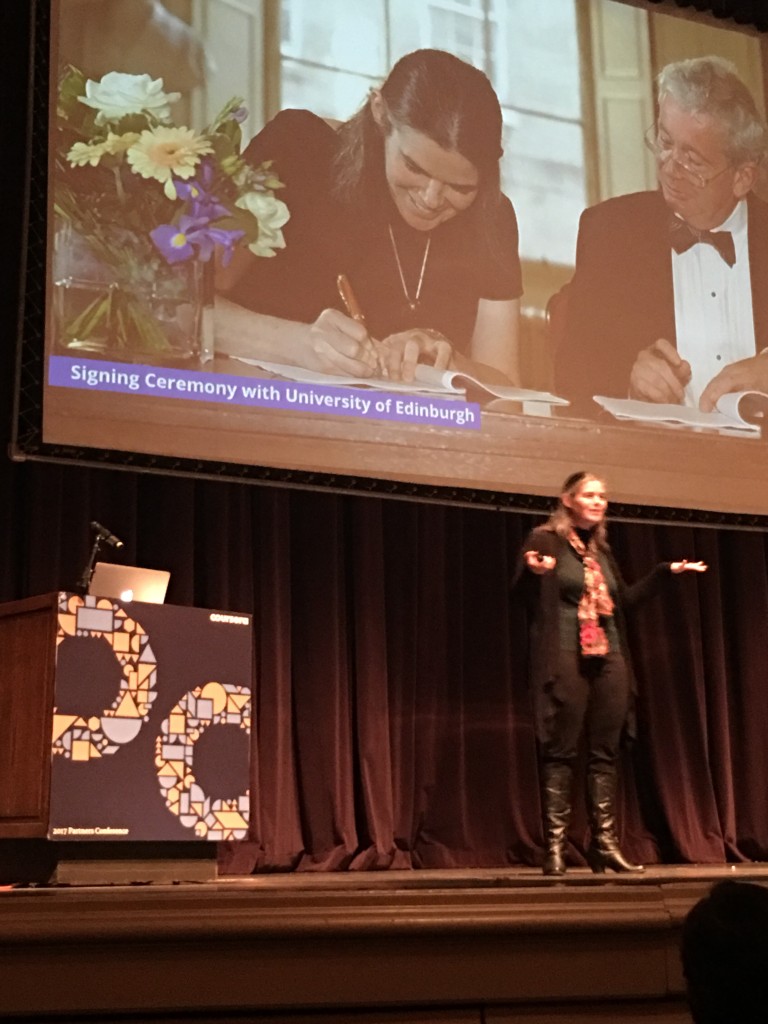 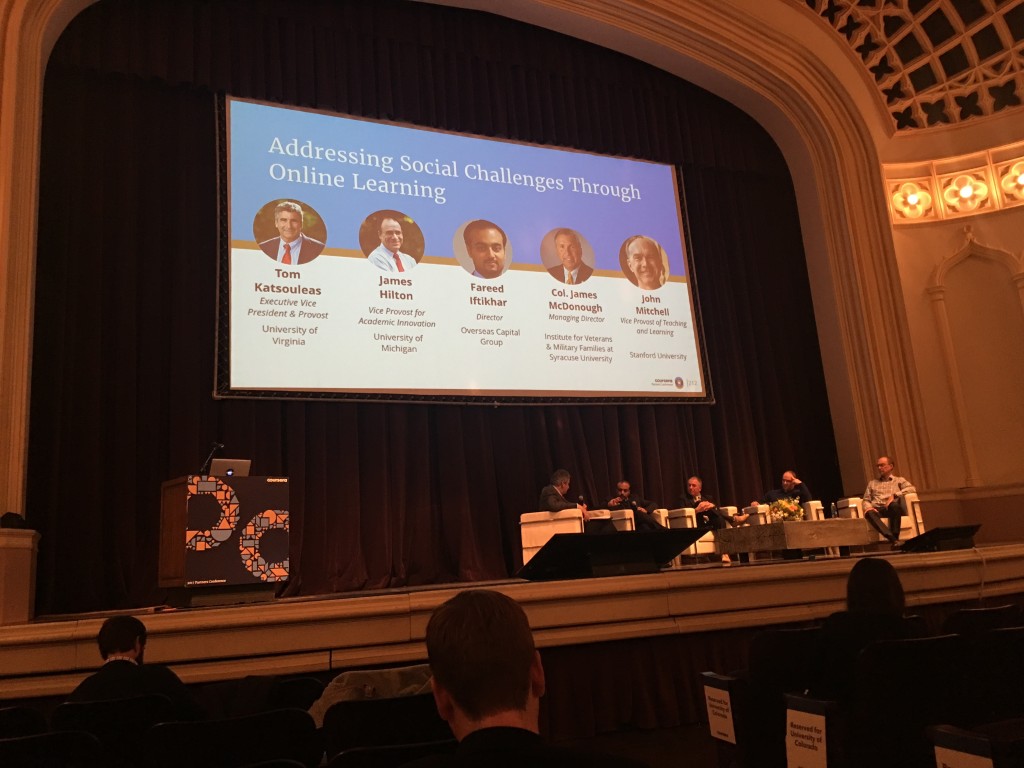 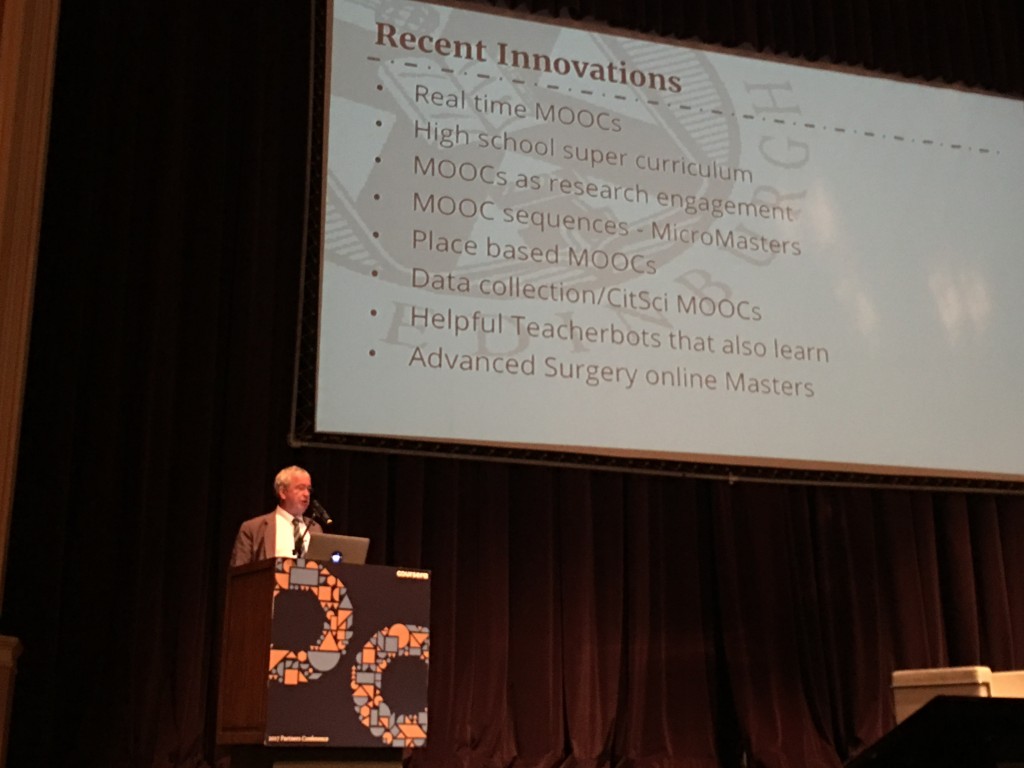 During the conference we heard talks from many of the leaders in higher education in a number of very interesting keynote talks. The meeting began with an introduction from University of Colorado officials, who pointed out the growth in CU and its role in creating patents and new companies in the Boulder region. Daphne Koller gave a wonderful keynote explaining the history of Coursera, and some of the ways that their online courses have profoundly improved the lives of students across the earth. In her words, Coursera was about “transforming life by accessing the best learning environment.” she is proud of the 25 million “learners” and 100 million enrolments, and noted trends that include increasing enrolments across the world with largest growth (over 50%) in South America and Africa.
Additional keynotes in the first day included a talk by Ted Mitchell, former U.S. Undersecretary of education, who discussed how higher education is changing and how online learning is helping shape the future of education.  Some interesting elements include “learning hubs” that the US State Department is running to provide online courses across the world. Some of the refugee camps in Kenya and elsewhere are opening online learning centers, and Coursera has started a free certificate program for refugees to help them get an education. One quote from the meeting, from H.G. Wells, was that “History is a race between education and catastrophe” – and clearly this quote applies to some of these present day situations. 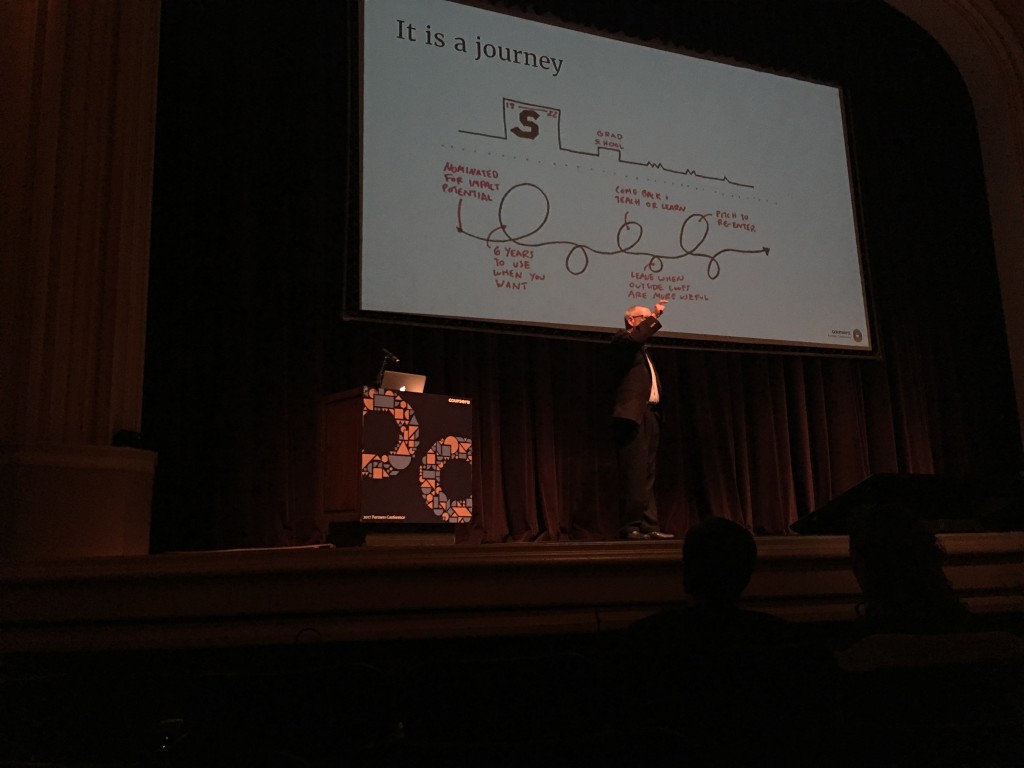 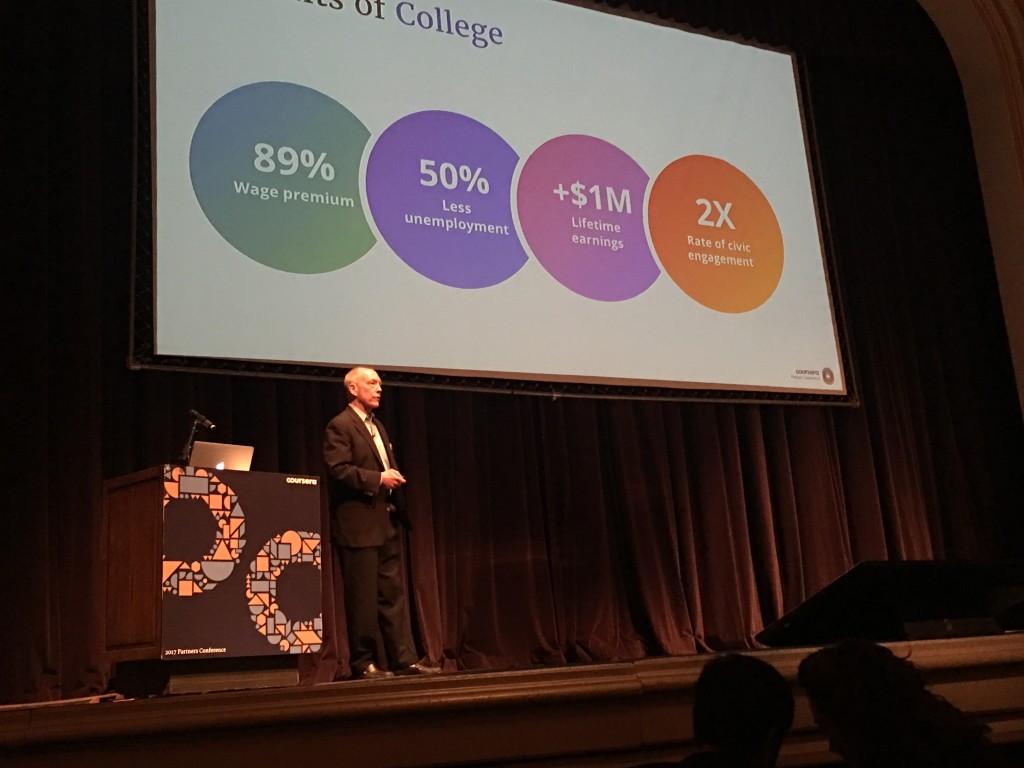 Rick Levin gave a great roadmap of where Coursera is going in the coming years, and noted that “we’re part of a world changing enterprise.” He stressed the importance of access, impact and quality, and hopes to make Coursera respond with answers to two questions – “how to respond to the needs of life-long learners?” and “how to increase social impact?” Rick gave some additional statistics about how Coursera is reaching a broad demographic – its students include 45% from emerging markets, and 89% over the age of 22. They are experiencing a large growth with 6 million unique “learners” in the past 12 months, 500,000 paid learners (77% growth) and some 200,000 on financial aid.  Levin is convinced that Coursera is doing a lot to help people in the “underdeveloped world” as well as responding to the needs of  millions of people who need to train for new jobs and to respond to the future which will require skills beyond the traditional education experience of most people. Levin described some of the new degrees being developed at Coursera – such as the “stackable micro-credential” and other mini degrees  from universities such as U. Illinois and a French Business school in both tech and management subjects. These micro degrees appear to be a big part of the future of Coursera.
One of the most interesting of the keynotes came in the second day when Ashok Goel from Georgia Tech, who described how Artificial Intelligence had created a virtual teaching assistant in the Computer Science department at Georgia Tech. This virtual TA was given the name “Jill Watson” and was trained by analysing the responses of human TAs to student questions in the prior years of the course. Using neural net and other advanced algorithms, Jill was designed to create an accurate and very human set of responses to student email queries. The course designers were careful to be sure that Jill only would provide answers when her algorithm suggested an extremely high probability of having a correct response, as to prevent mis information from this technique. The students were not told that Jill was an AI “bot” – and some even had such a high opinion of her that they wanted to nominate her for the best TA award at Georgia Tech! This amazing (and somewhat disturbing) use of AI was also the subject of an October 2016 article in the Chronicle of Higher Education, with the title “When the Teaching Assistant is a Robot.” 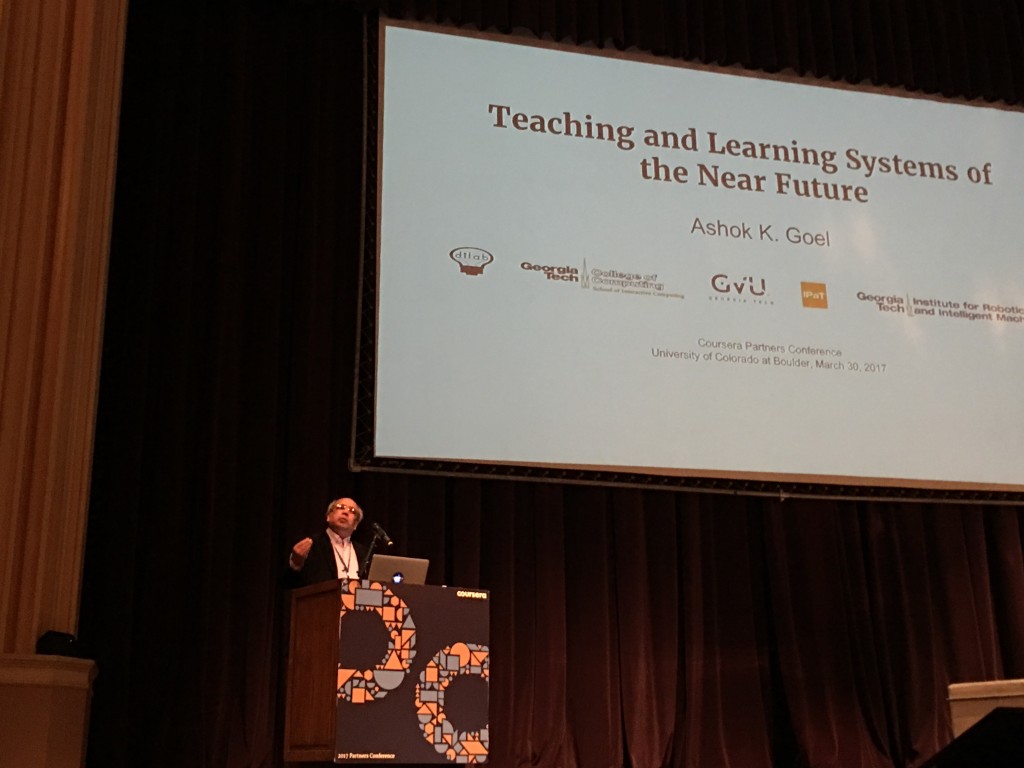 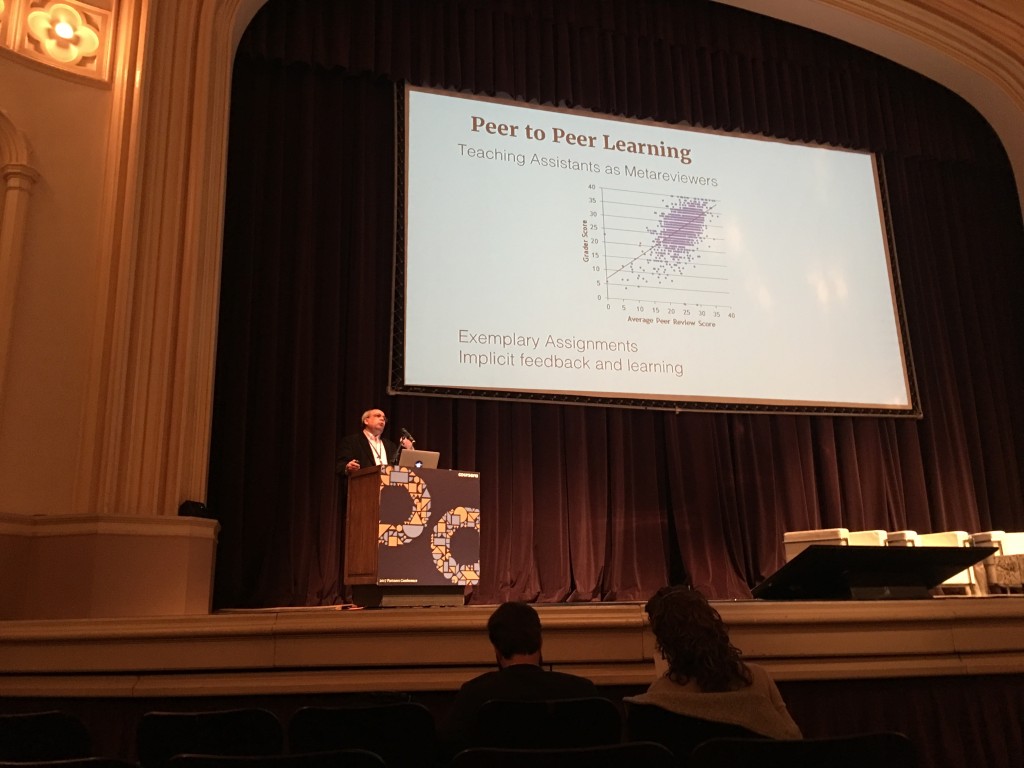 During the breakout sessions and discussions I had a chance to meet a wide range of experts in education and discussed with them some of the ideas about how well online learning can help students in smaller liberal arts colleges. Like we learned within the LACOL (Liberal Arts Consortium for Online Learning) project, the main emphases for liberal arts colleges are to improve the “in class” experience of students, as well as to increase the ability of students from diverse backgrounds to build their experience and performance in certain cases. The LACOL experience showed us that for small liberal arts colleges online learning in a few areas shows great promise. This includes an online quantitative skills course – perhaps as part of a “bridge program” for entering students, a method for offering small enrolment language courses to students distributed across a wide geographic area, and using technologies to help students work  collaboratively to annotate and discuss advanced literary texts in a social media type environment. 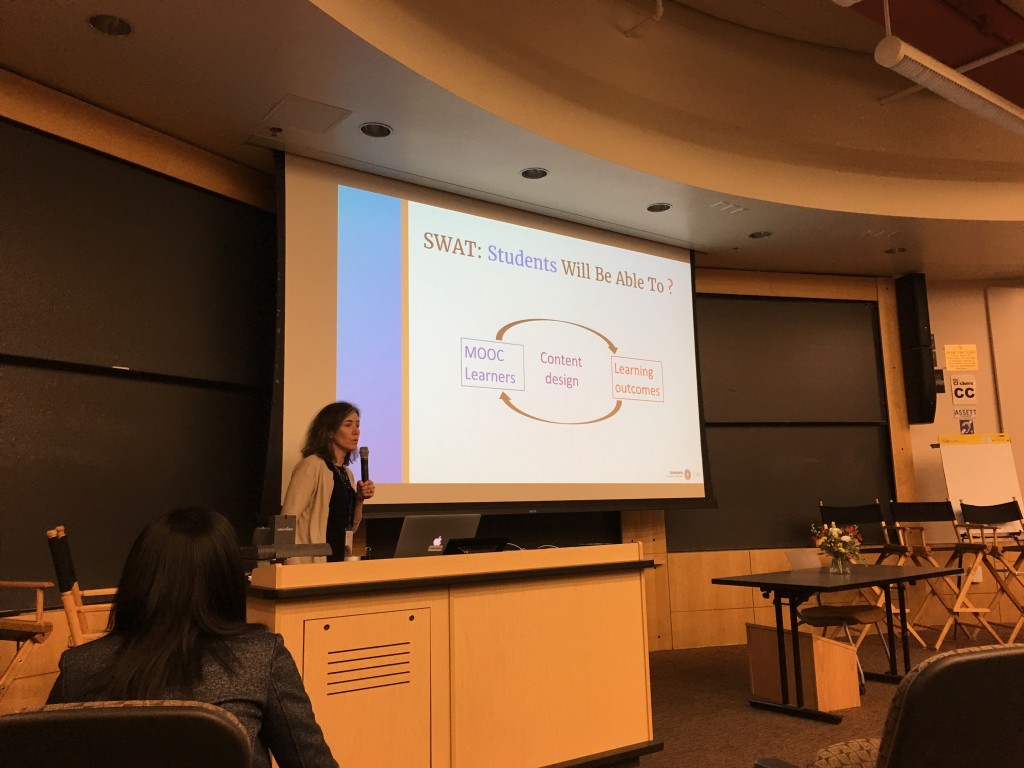 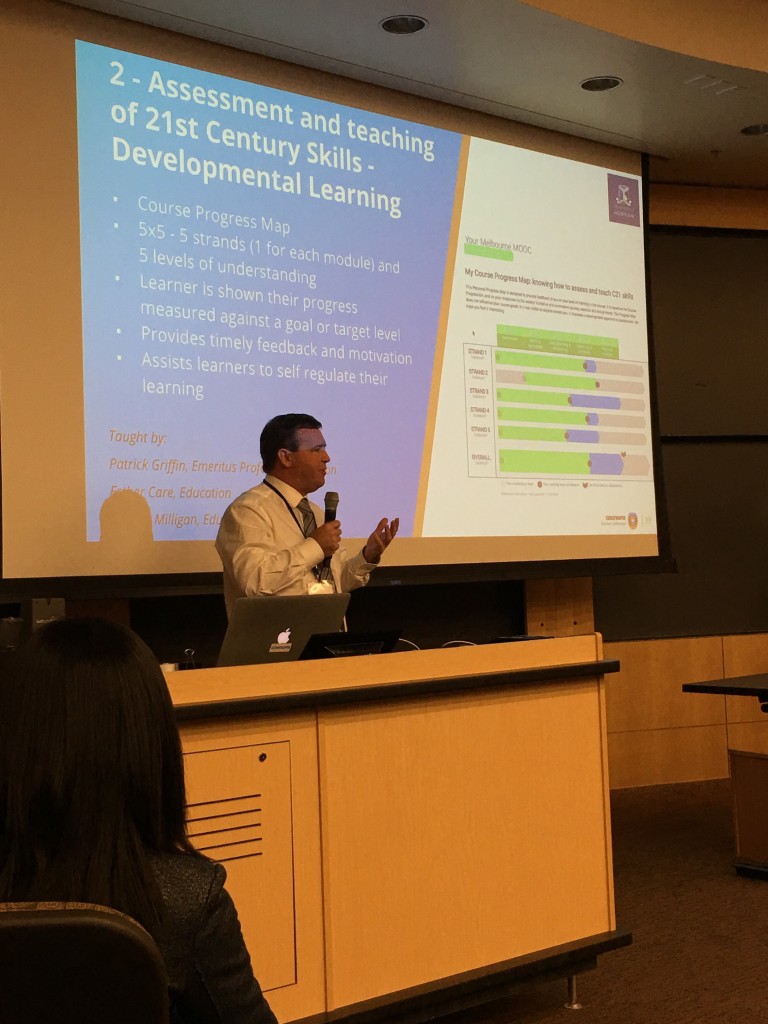 Some of the pictures below also come from a brief tour of the Fiske Planetarium at CU Boulder. My old astronomer friend Doug Duncan was at the conference and took a few of us around campus to see the model solar system and his amazing planetarium. Doug has done a fantastic job building up the planetarium, developing original shows, and providing fantastic outreach to a broad range of students, K-12 teachers and college undergraduates. His current project is to prepare for the 2017 August solar eclipse, and he made a point to promote safe eclipse viewing with our Coursera conference attendees! 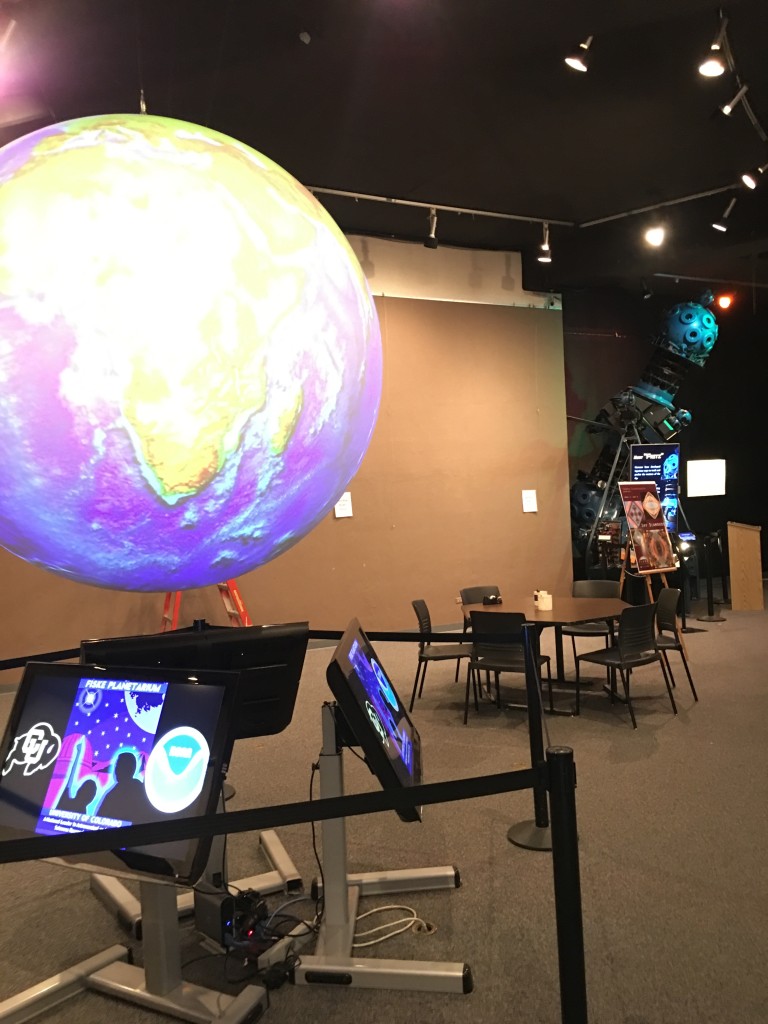 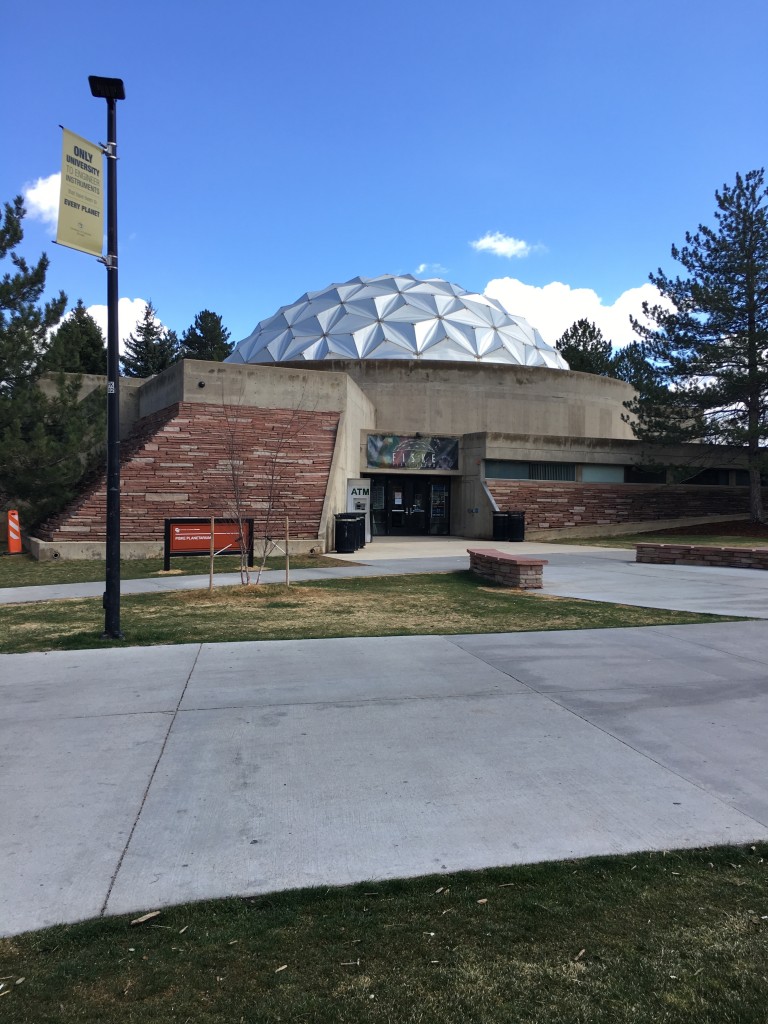 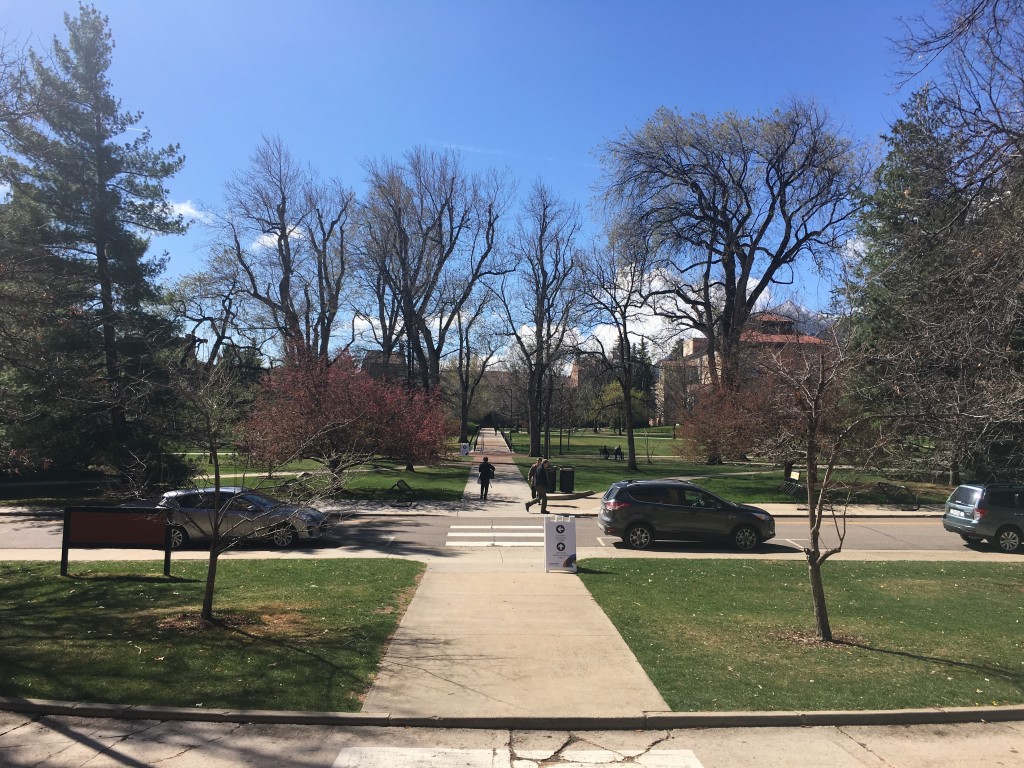 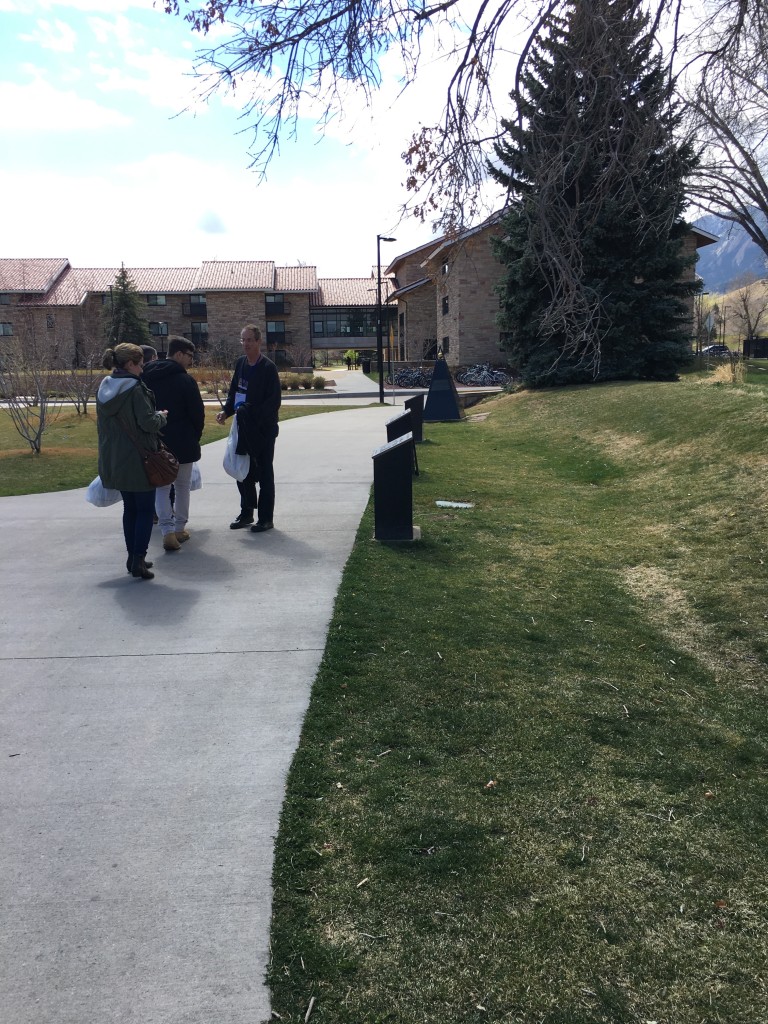 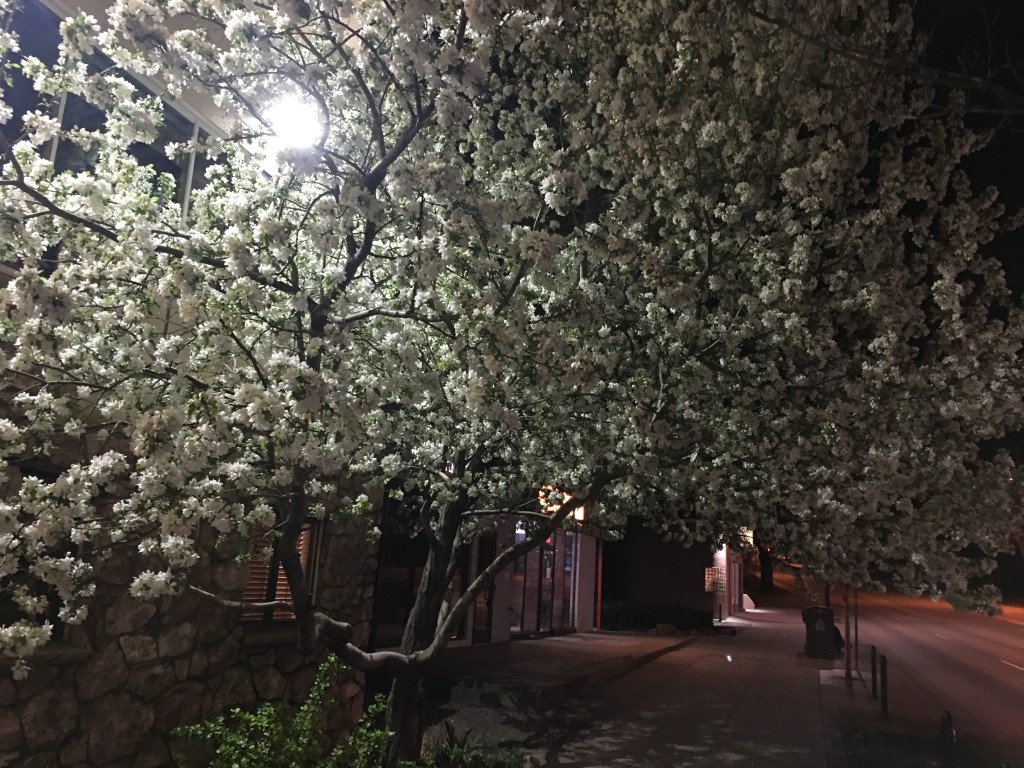 As online technologies advance I am sure that they will have a profound effect on all institutions of higher learning, including liberal arts colleges. It was wonderful seeing how these technologies are advancing and I look forward to seeing how in the coming years both the in-class and “asynchronous” parts of online learning can be fine-tuned to help students learn more efficiently and effectively.