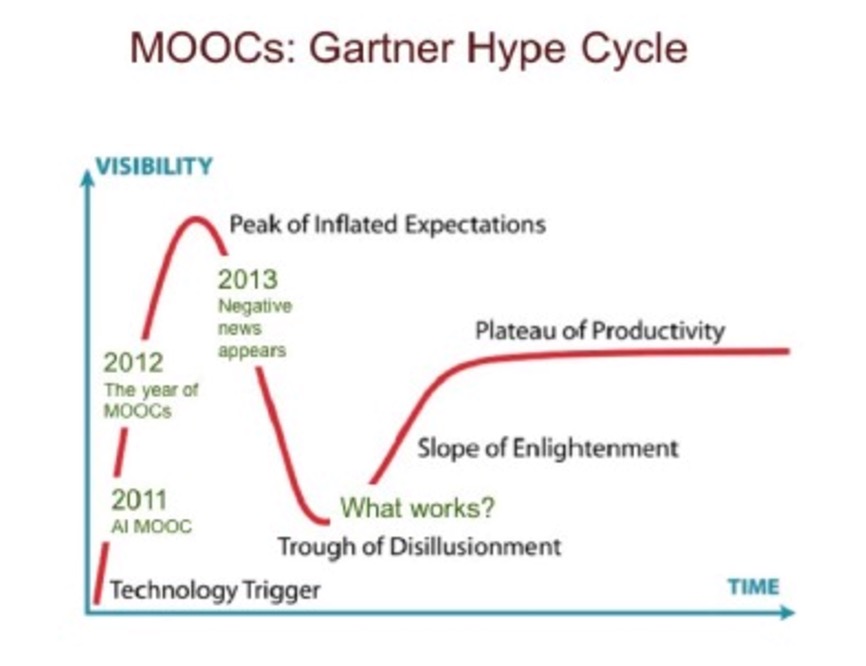 Later in the conference we heard some very interesting talks about pedagogy – including a discussion of what is “Beyond MOOCs” and a panel discussion on flipped classes, among other topics. Below is a summary of those talks.

One notable talk was by Marnie Hughes Warrington from the Australian National University (ANU), about “Beyond Disruption: Mainstreaming MOOCs in Higher Education.” Warrington described how MOOCs followed the “Gartner Hype Cycle” which gives an envelope of “visibility” with time – and includes a “peak of inflated expectations” (2012) which is followed by a “trough of disillusionment” when bad news appears (2014), and then a “slope of enlightenment” and a “plateau of productivity” when the appropriate uses of the technology are found. The envelope (from her talk) is below. 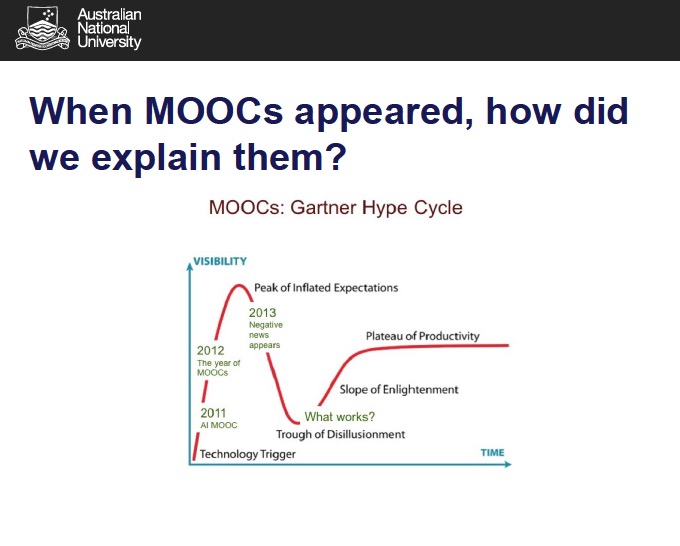 She talked about how lectures are bad pedagogy as well, and that MOOCs in many cases embodied bad pedagogy with a new technology. At ANU they put all the lectures online, and kept track of how the students behaved within the “live” lectures and using online lectures. The “mass broadcast” approach – either in person or online – is in trouble, according to Warrington. The attendance of the students at live lectures was abysmal – even for those lecturers who were generally regarded as excellent teachers. They installed infrared counters in all the lecture halls and kept data for all the classes and their attendance at ANU.  Warrington reported that after 3 weeks an average lecture has an attendance of 30% of its students!  Some were as low as 5-10%!  The online lectures were only downloaded at a rate of about 50% and students while watching these lectures often reported “chipmunking” – a practice of playing back a lecture at 3 times regular speed (making the instructor sound like a chipmunk!).

Many faculty attribute these trends to students who are “lazy” and “inattentive” but Warrington thinks this is a fundamental shift in student behaviour that is based on their ability to learn (or lack of ability to learn) from lectures. One interesting piece of data she cited came from the EdX online learning provider. Their courses also include lectures and they are able to record how long students can watch a lecture. This data shows conclusively that for students who complete certificates online (the best and most persistent ones) their ability to watch a video peaks at about 6-9 minutes and then falls off dramatically with longer videos. Apparently a video longer than 6-9 minutes will on average be viewed for only 2-3 minutes, while the shorter ones are very likely to be viewed in their entire length – suggesting some fundamental limit in attention span for these students of 6-9 minutes!

Some of their ANU professors, such as Physics prof Joe Hope, used this sort of data to create an entire online Physics curriculum using the EdX Edge platform. They are excited about integrating these sorts of courses (with shorter lectures) with new ways of providing transfer credits for students. These online materials also can be used for on campus students for a flipped environment – freeing up time in class for more interactive work.

Incidentally the ANU decided that lectures were so unpopular and ineffective they decided to demolish six of their lecture halls on campus to enable more interactive space for different types of teaching!

A panel of experts on flipped classes also gave some interesting talks. One of the speakers describe the system one needs to create in a flipped class, which includes a set of weekly online quizzes, taken one day before class, large class review sessions with clickers, and small group active learning sessions to replace the class time formerly occupied by lectures. The basic structure of this flipped class is shown below. 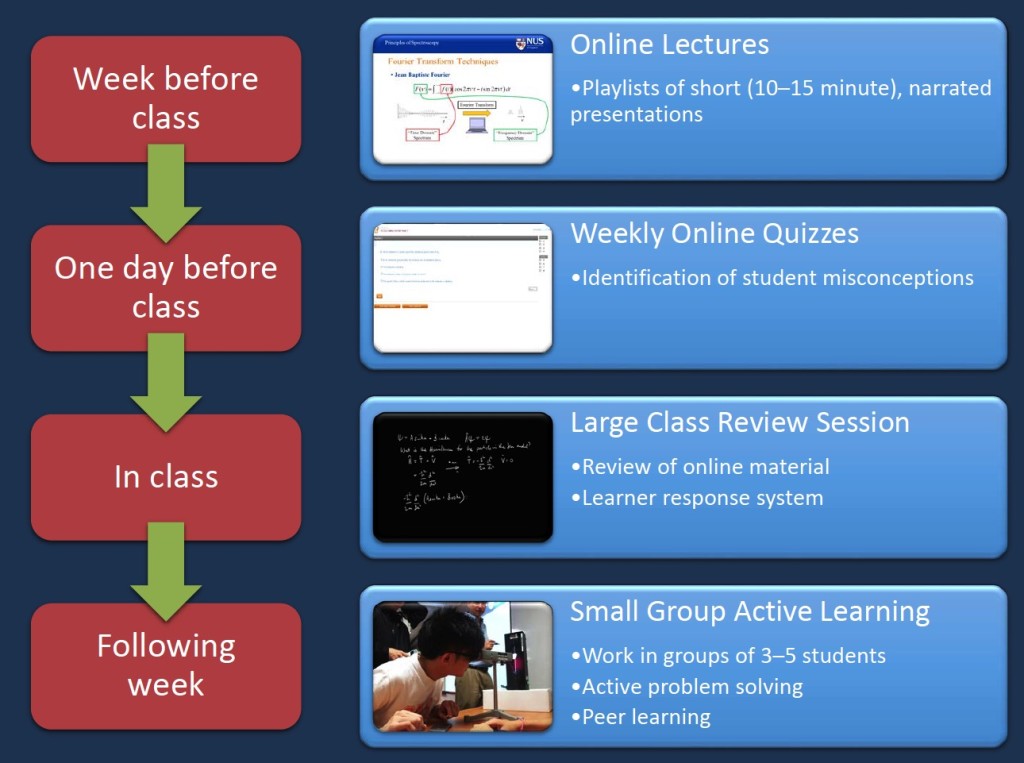 The flipped environment was shown to produce better student learning as well – with improvements of marks after flipping at a level of significance of a Cohen’s d of 0.59. The panel stressed the importance of stressing what a flipped classroom is, and why it is used. To acknowledge concerns from students, and overtly address their concerns and explain the timeline and rationale for the flipped environment is very important. 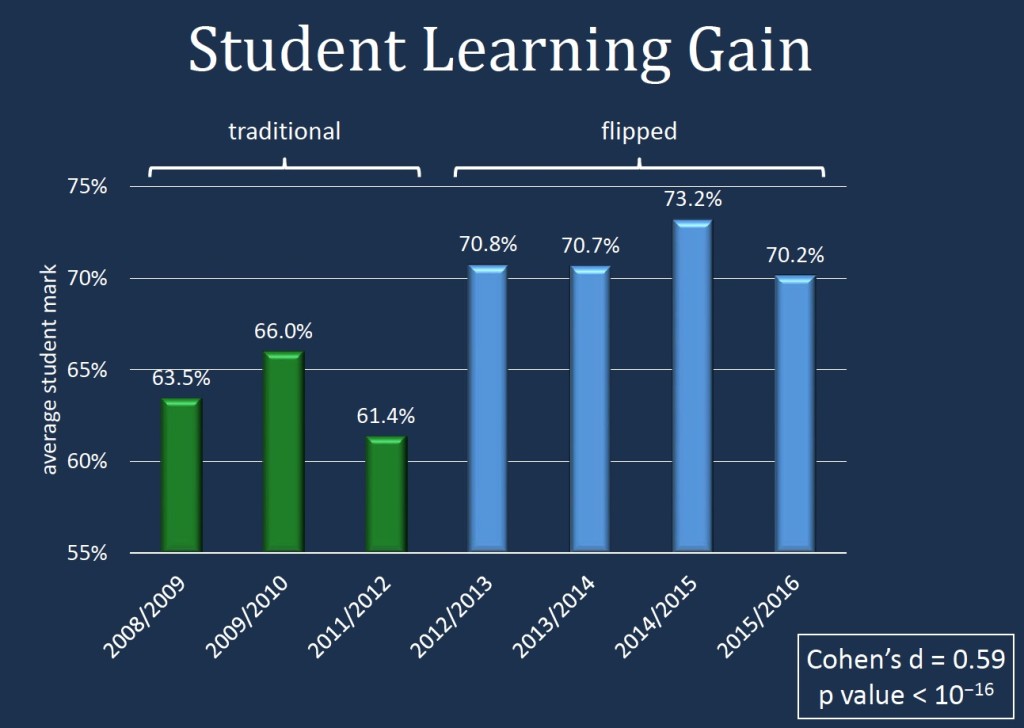 The HKUST has a nice grid which can categorize modalities of instruction between an x-axis of “Individual” to “Collaborative” and a y-axis of “Asynchronous” to “Synchronous” – and then putting the various ways instructors and students are behaving on this plane. 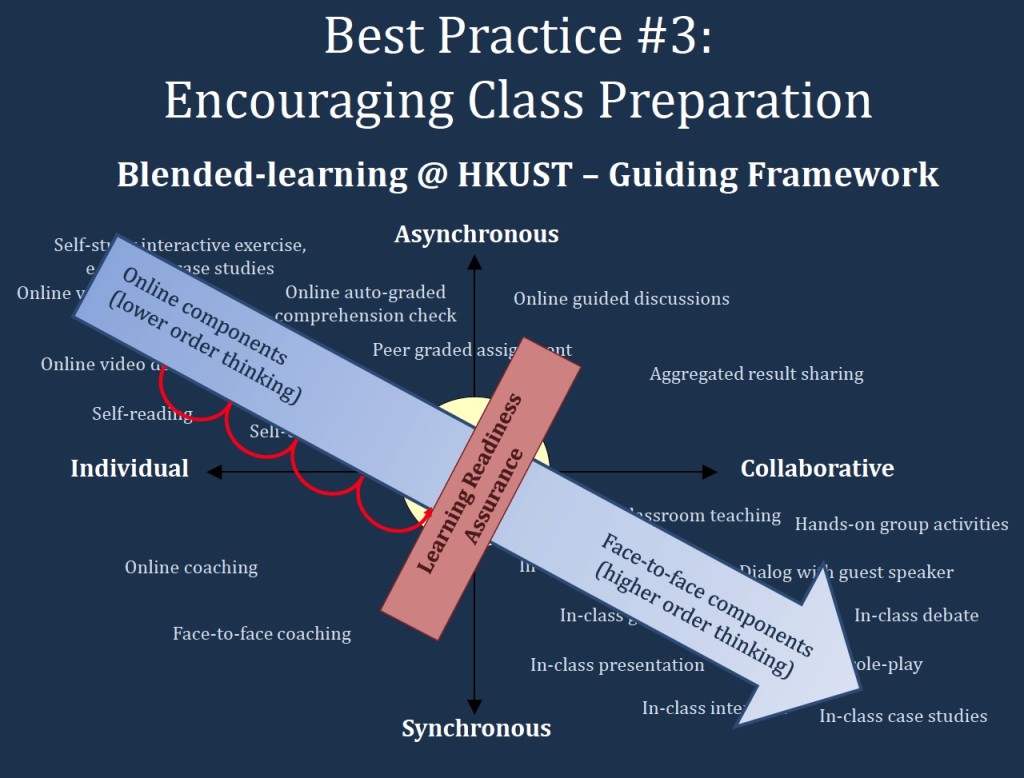 One interesting scheme was to randomize groups of students using playing cards. In this scheme one develops groups of 4 students with a deck of shuffled cards. Each suit would specify a role for a student, and the card value would designate a team name. The four roles (shown below) from Robin Angotti (U. Washington, Bothell) include Facilitator, Resource Monitor, Product Monitor, and Equity Monitor. 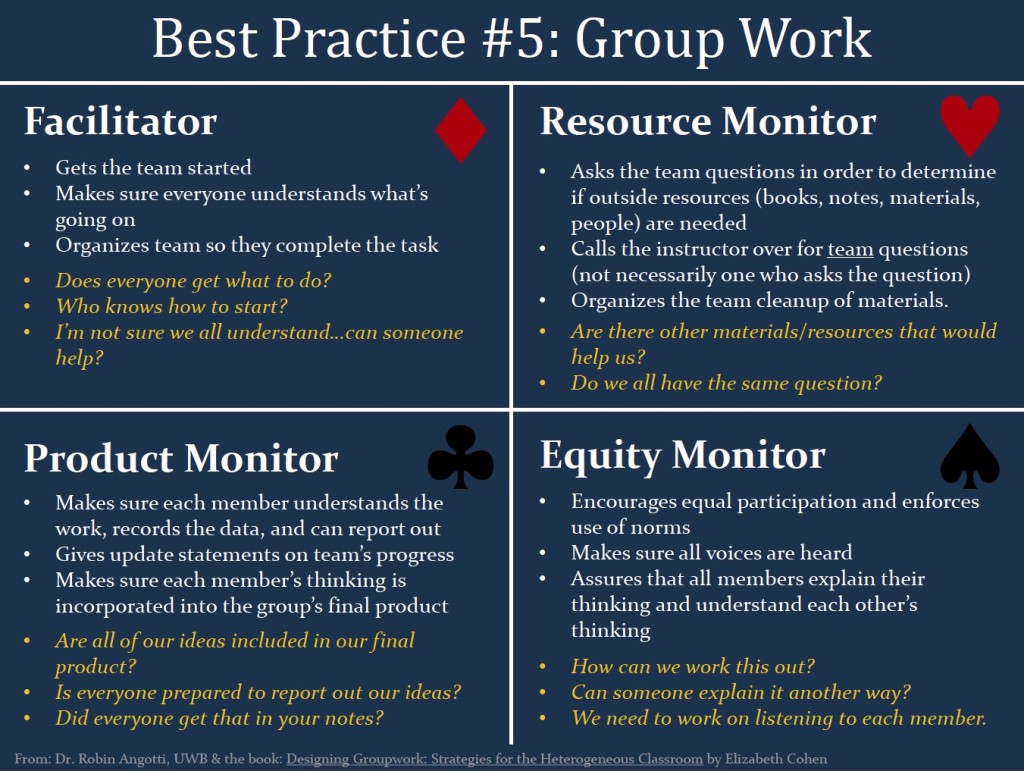 Finally a talk by Stephen Whiteside from the University of Aukland in New Zealand described a very interesting paradigm for developing university ed-tech with a very clever “agile development” planning envelope. Below are two figures from his talk. The last figure is a great illustration of “design thinking” and shows the various stages of creating a new product or service – using the analysis of your audience and a design rooted in the needs and insights of users. This approach for instruction and teaching is a very valuable one and should inform most of our academic development efforts. These figures are just so beautiful – I had to include them in my post! 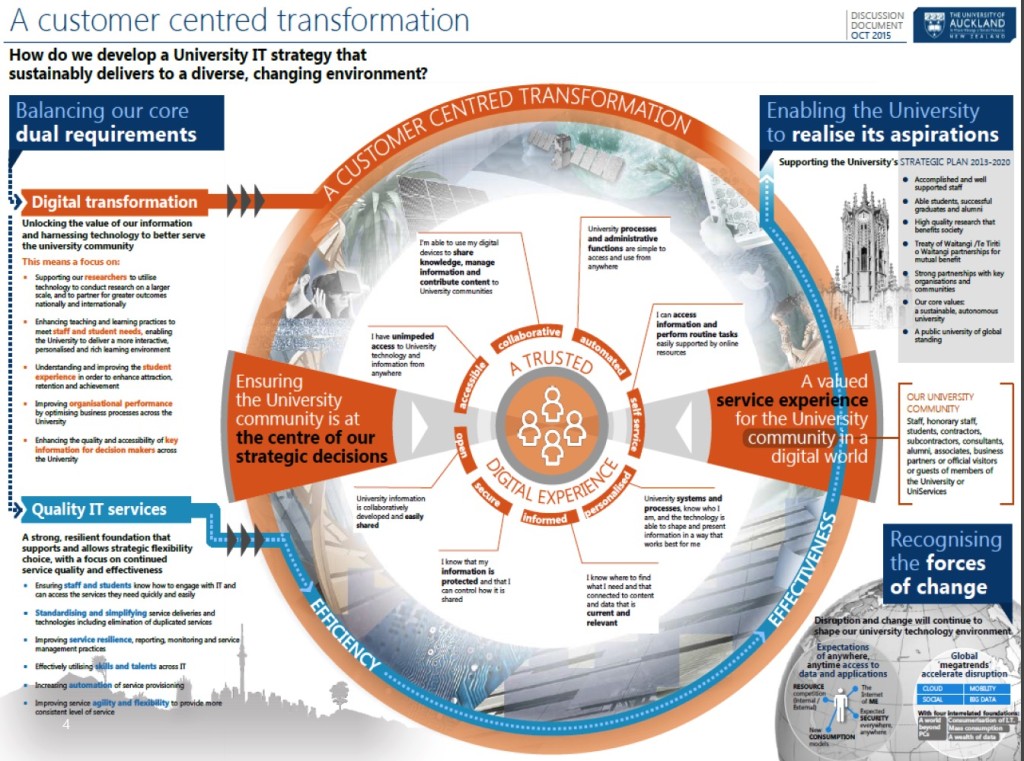 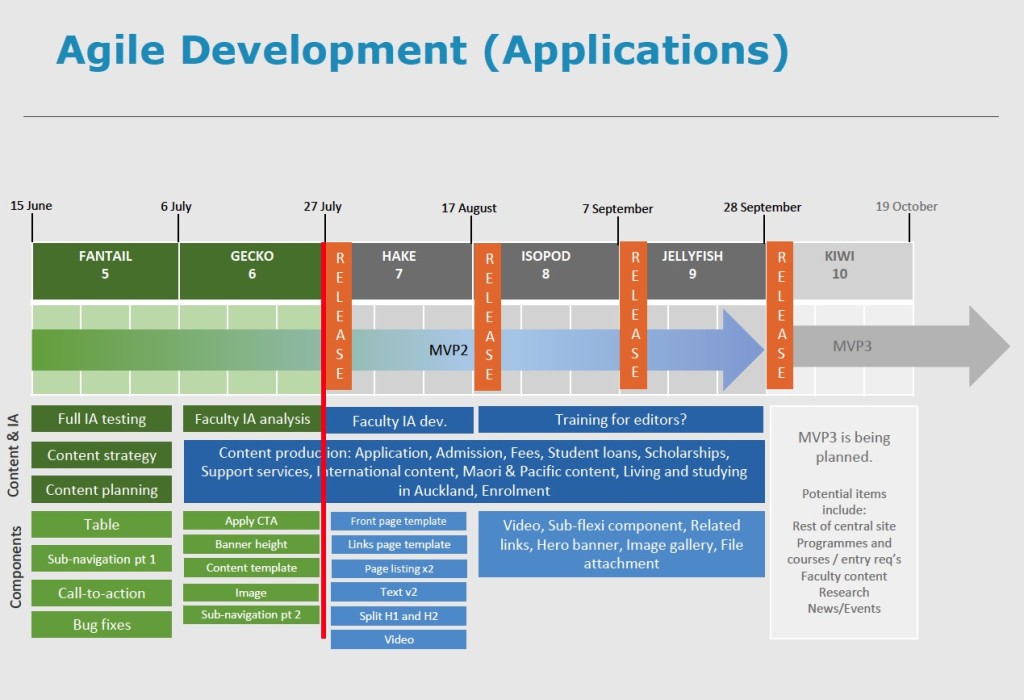 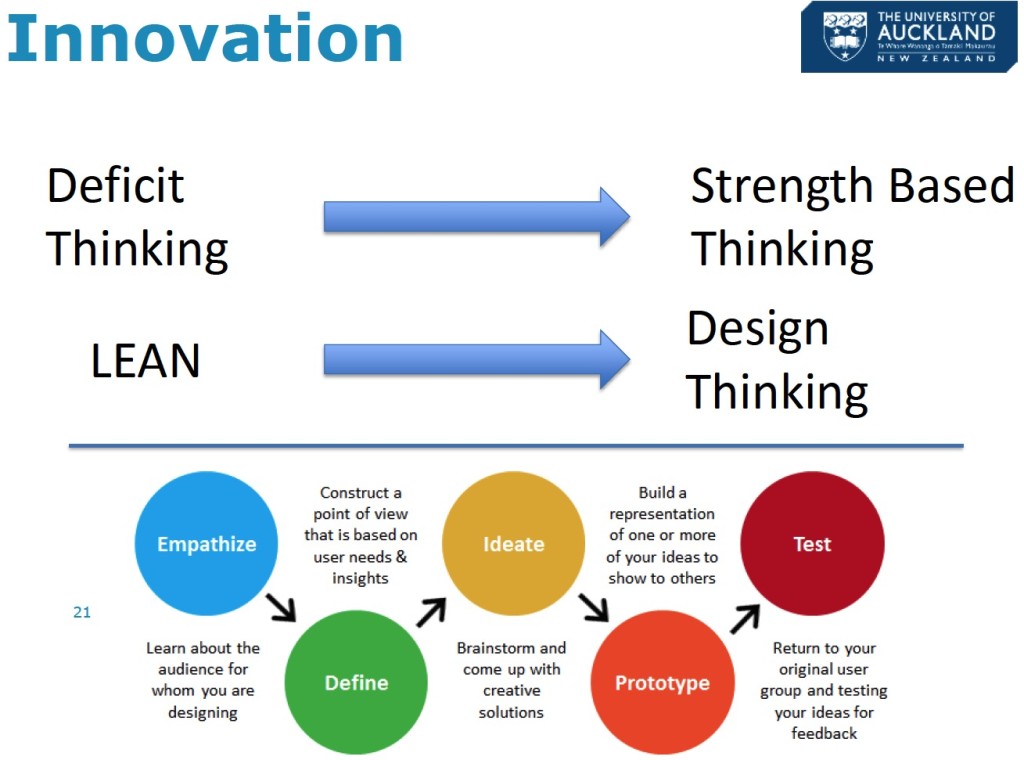