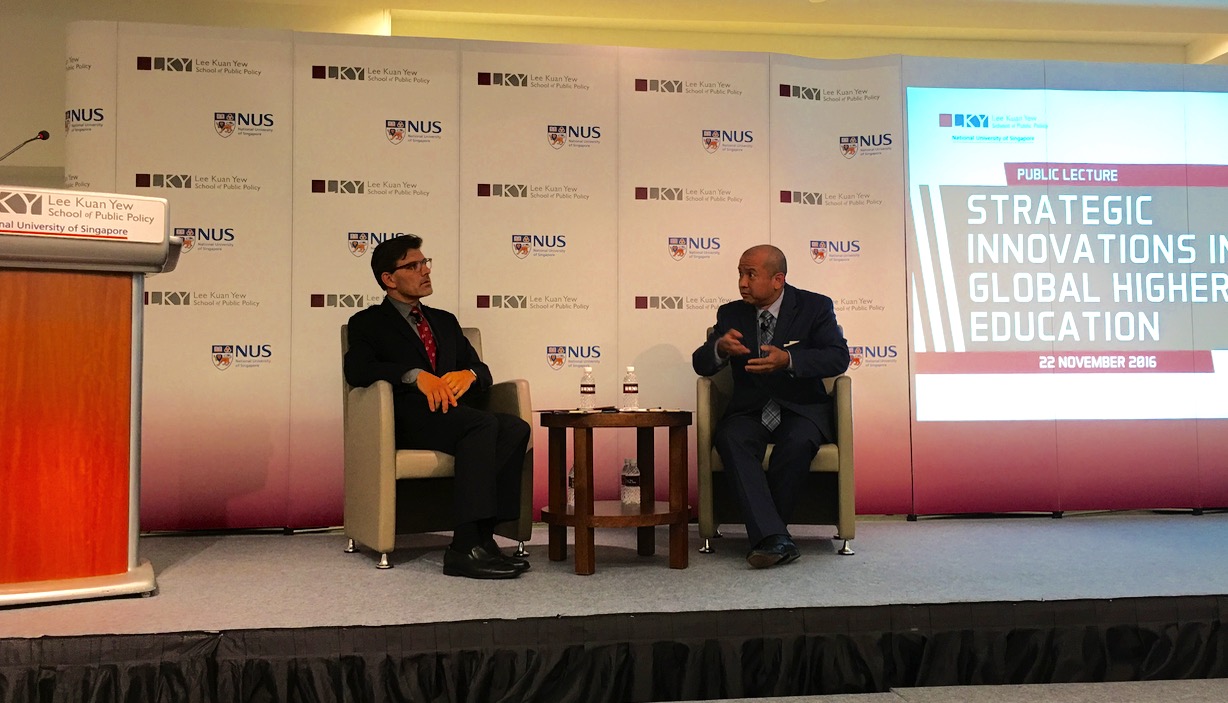 On November 22, CMC President Hiram Chodosh gave a talk at the LKY School’s Bukit Timah campus. His talk was entitled “Strategic Innovations in Global Higher Education” and a group of us from Yale-NUS College attended his talk and discussed these ideas with President Chodosh. I have known Hiram Chodosh for many years, and was especially grateful for his support and participation in our Liberal Arts in India conference in Bangalore in January 2014. 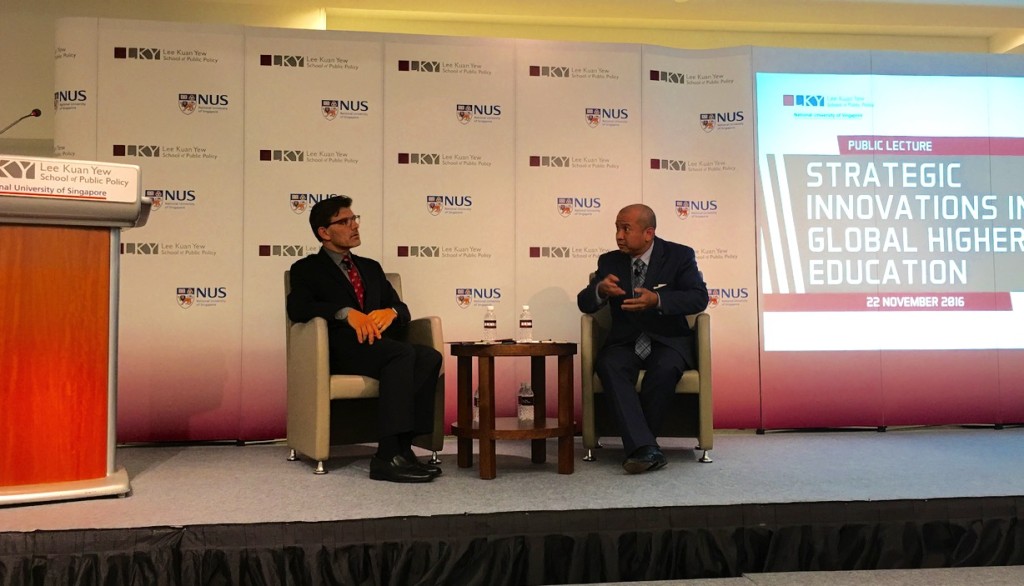 Hiram’s background is in law, so he began his talk describing some of the history of the region and in particular the judiciary in Indonesia in the post-Suharto period. He used this history to illustrate the necessity to get to “higher aims” and to get past solipsistic and self-referential approaches to find “dispositive answers” to the purposes of what an enterprise is doing. As President Chodosh put it, “strategic innovations don’t arise from pretences, they come from candid assessment and solving of challenges.” This led him to a discussion about the USA in the post-Trump era, and he wondered whether education was a “causal force” of this event, and what sort of collective responsibility education had for this.

He noted that just as the US is divided, higher education is also divided. These deep divisions in his opinion “prevent greater challenges from being solved.” These divisions “paralyse” and prevent solutions. Within the US, divisions by class, race, gender, national origin and education create biases and prejudice, according to President Chodosh. While higher education is a “comparative National Advantage” in the US,  Chodosh questioned whether “higher education’s contributions are aligned with what the world needs.” Chodosh pointed out that only half of the US believed that higher education believed that college was worth the cost and only 40% of Americans are able to graduate with a degree of Associate or above.

According to Chodosh, the education of citizens produces “the most important infrastructure” which is “grey matter.” He points out that the residential colleges (like CMC) are an “aggressive experiment in diversity” and that it is “remarkable it works as well as it does.”  Within colleges like CMC there is an emphasis on interdisciplinary research, higher value skills, and instruction designed to create more responsible citizens.

From asking opinion leaders, employers, and from his long reflection, President Chodosh has developed a hypothesis of what higher education needs to do – which he has shared with many of the CMC faculty, students and staff and which has formed a basis for his work at CMC. The hypothesis of what is most highly valued is:

This formulation points him toward instruction using mixed problems, mixed methodologies and with students working in diverse teams to “learn what you don’t know” and then use the diverse team to work together to solve problems. Interdisciplinary co-teaching as well allows professors to embody many of these qualities which he believes are most valued in the students and graduates of liberal arts colleges.

President Chodosh is excited about how the “students are way ahead of us” and he envisions a liberal arts college as a place where it is possible to “empower and channel the energy, skills, and impulses of this generation.” Chodosh also points to three core capabilities that are virtues needed in today’s world. Those virtues are:

These three virtues are now used throughout the CMC instructional materials, proposals, public events, and he is working toward “internalizing” these values into all that is done at CMC. Chodosh has organized workshops and roundtables on these virtues which then have resulted in a number of deliverables within the CMC campus. It was a very interesting and inspired talk, and our group from Yale-NUS enjoyed hearing the values and goals of liberal arts so well articulated! 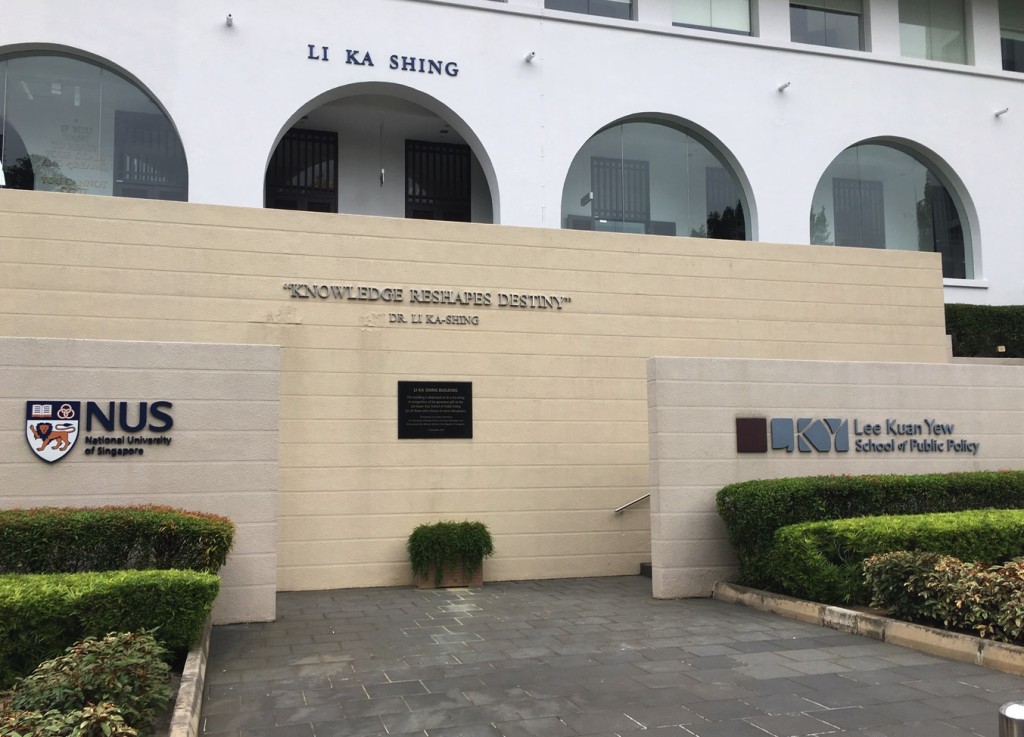