During my visit to Bangalore I had the unique privilege of meeting with the faculty of the new Azim Premji University in Bangalore. Like many new universities in India, Azim Premji University has been founded by a private philanthropy – in this case from the eponymous foundation started by the founder of the Indian electronics company Wipro. Unlike many private universities in India, Azim Premji is founded with very clear social goals to promote development in rural India. Their university has been founded with the goal to create a new generation of graduates who can return to villages to teach and to develop India in its broadest sense.

The current Azim Premji University is located in a temporary home in a Tech campus known as the “PES Institution of Technology” which itself is located in a place called “Pixel Park.” Since so much of Bangalore’s new economy (including Azim Premji) arose from electronics and computers, the location seemed appropriate!  I was joined in the visit by Lakshmi Saripalli from the Raman Research Institution (RRI), who co-organized the Future of Liberal Arts in India conference in Bangalore in January 2014 at RRI.

We met with Venu Narayan, who is leading the new Azim Premji undergraduate school, and a team of the Azim Premji University professors who are hoping to launch their new undergraduate program with their “first batch” this July. Venu described how the students were selected, and how they include over 35% of students who are disadvantaged, with over 50% from rural villages, and in many cases with parents unable to read. Azim Premji makes use of its strong presence in rural India to connect with social welfare organizations that provide secondary education for these children, and then is able to provide tertiary education for a select group of rural students who show strong motivation and interest in helping society. Their admissions process involves interviewing all of the potential candidates, and looking for students who can think outside the box and who have strong and sincere motivation. Their goal is to avoid the “engineering treadmill” and instead to develop students who can promote justice, ask good questions, and be firmly rooted in their own society – with a strong emphasis on Indian culture, politics and aesthetics.

Some of the courses they described were quite interesting – a First Year seminar course in writing and critical thinking, themed towards topics within the Azim Premji mission; a set of courses broadly titled “Understanding India” which will include mixes of social sciences, humanities and sciences, and a full set of science courses which enable the new university to offer majors in Physics, Biology, Economics and Humanities. The group of professors included Usha Rajaram, formerly of UWC Pune, who is helping to develop the humanities curriculum, and Rajaram Nityanada, former director of India’s National Center for Radio Astrophysics, who is helping develop the physics and science curriculum. Within the group was a remarkable spirit – a mix of heady enthusiasm in writing an entirely new curriculum, and also a bit of trepidation, with students due to arrive in just a few months!

The Azim Premji temporary campus in Pixel Park, Bangalore. Their new campus is being developed and should open in about 3 years. For now they are using a set of floors within the PES Institute of Technlogy 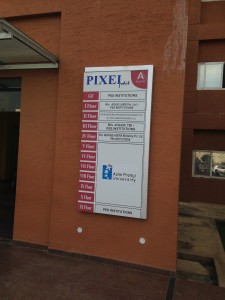 A closeup of the Azim Premji Pixel park sign, showing their floors in their temporary quarters.