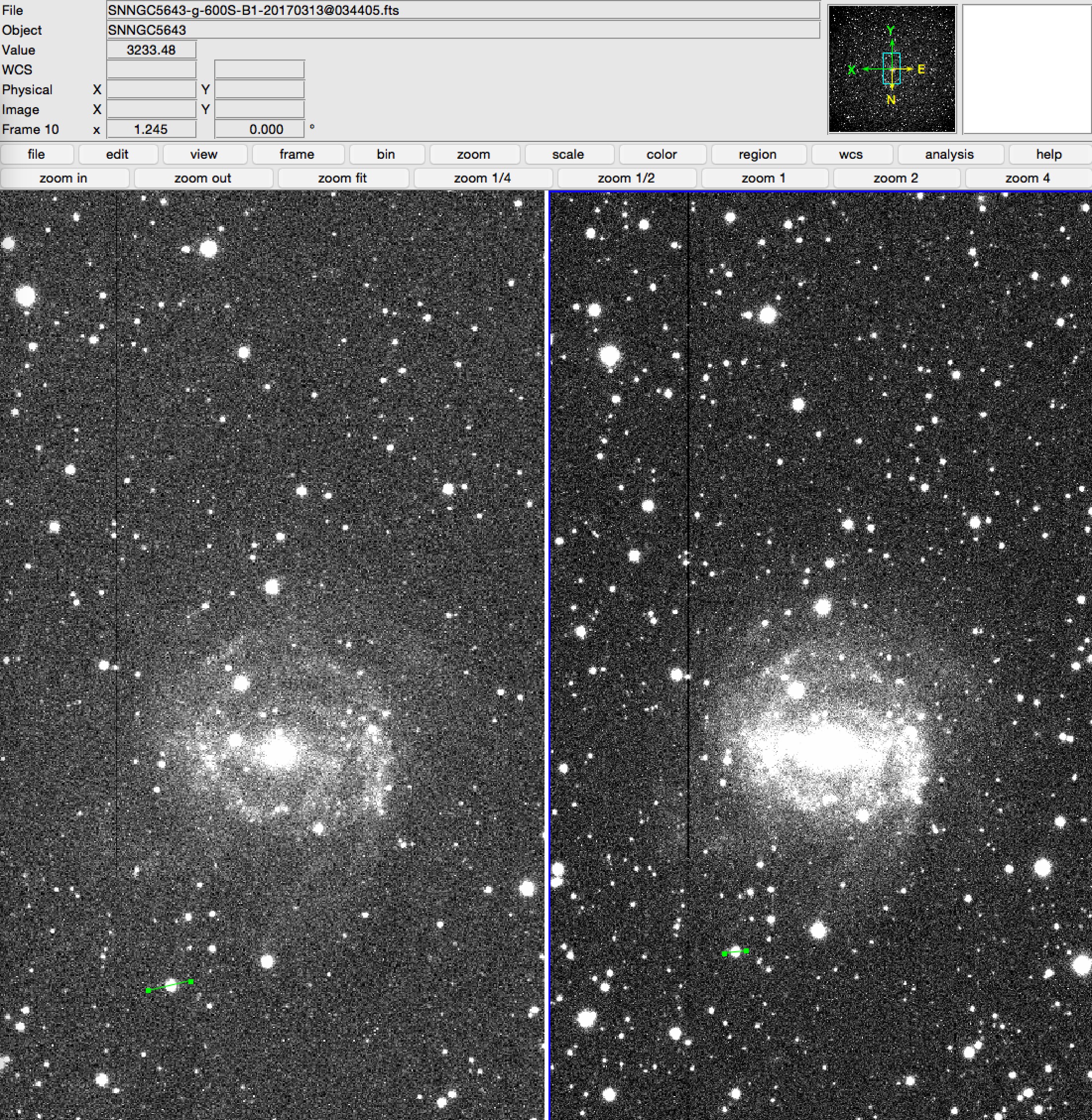 During our Observational Astronomy class at Yale-NUS College, we had the good fortune to have a nearby supernova explode – just before our Monday class!  On the Sunday before our class (March 12), I received an email from one of my friends at Carnegie Observatories noting that a new supernova was discovered in NGC 5643, a galaxy about 51 million light years away. As chance would have it, our class at Yale-NUS College in Singapore was scheduled to use our remotely operated telescope in Chile known as LCRO that morning. One of the wonderful things about doing astronomy in Singapore is NOT the weather, but instead the possibility of remote observing with a site 12 hours of time change away. In our case, we had access to the Las Campanas Remote Observatory, a wonderful 0.3-meter telescope in the best observational astronomy site on earth – Las Campanas Observatory, Chile. With the 12 hour time change, our astronomy class in Singapore was able to enjoy live remote observing during our 9:00AM class time!  I was habituated to having breakfast on class days, then opening up the telescope right after breakfast – as it was just getting dark in Chile after my Singapore breakfast. Then after focusing the telescope I would start class and have the class pick targets for observations. This particular class we were going to be working more with variable stars – perhaps getting a light curve of a Cepheid. However Nature gave us a much better plan – being able to participate in cutting-edge research – watching the final days of a star as it explodes and creates new elements that one day could become part of a planetary system or even beings far from Earth!  We began studying the supernova in earnest – with a guest lecture from Rachael Beaton of the Carnegie observatories (shown below), and class photometry projects finding zero points and new data for the supernova as the explosion unfolded during our semester. Some of those class photos are below. 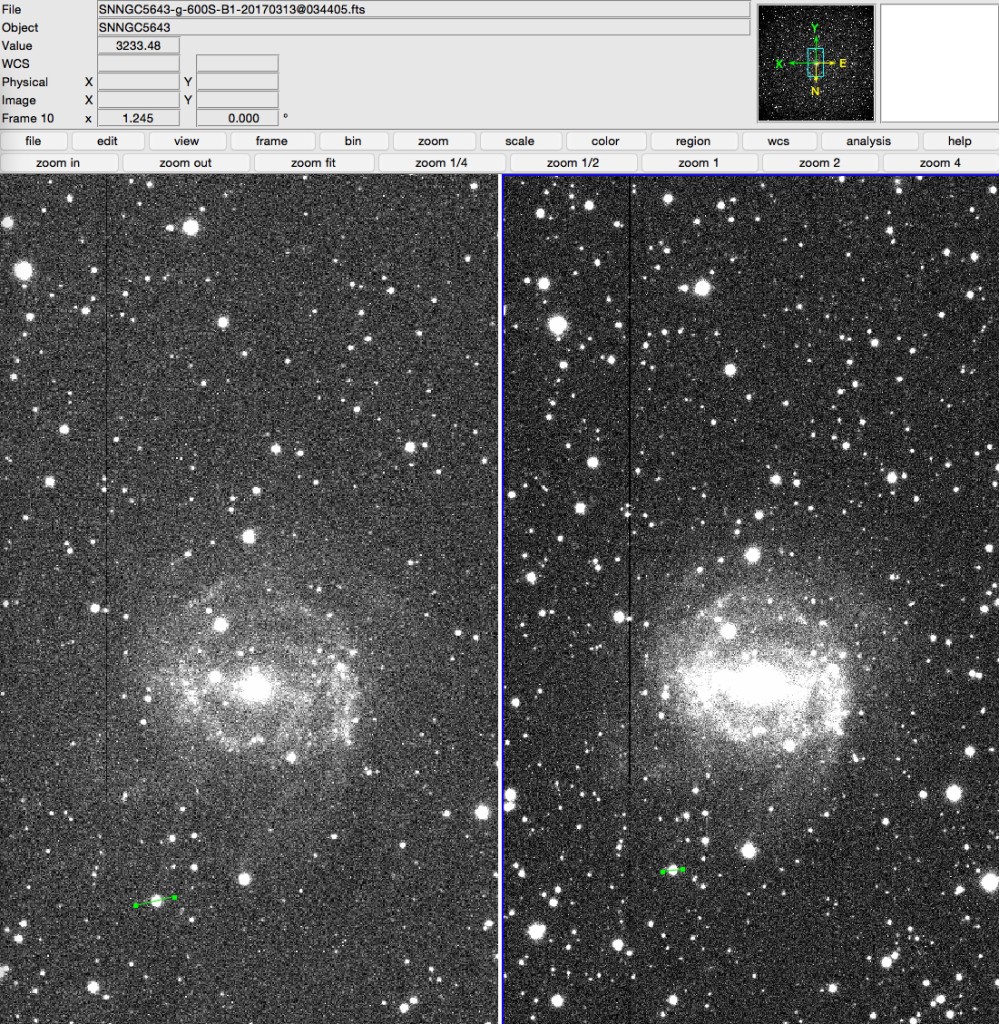 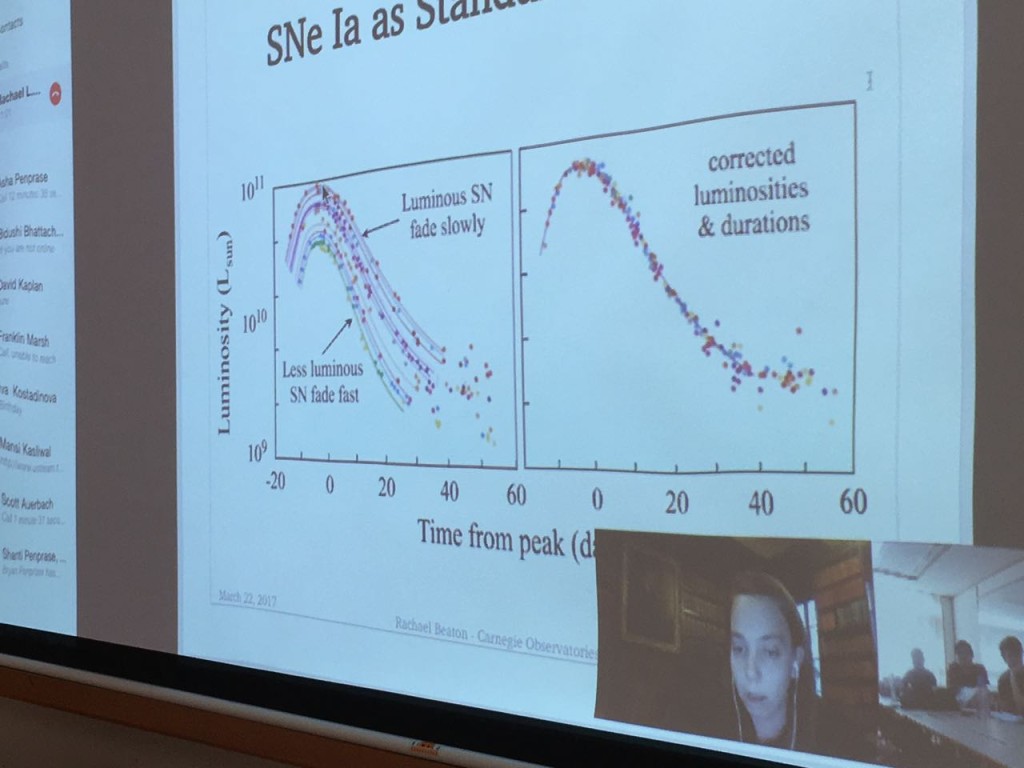 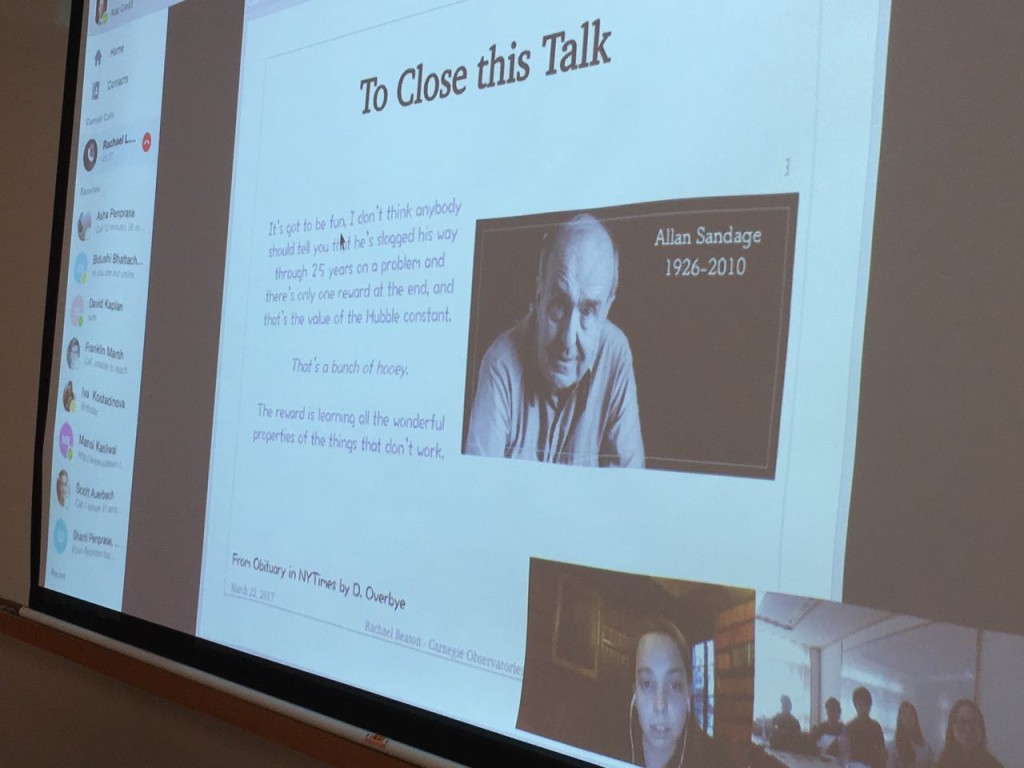 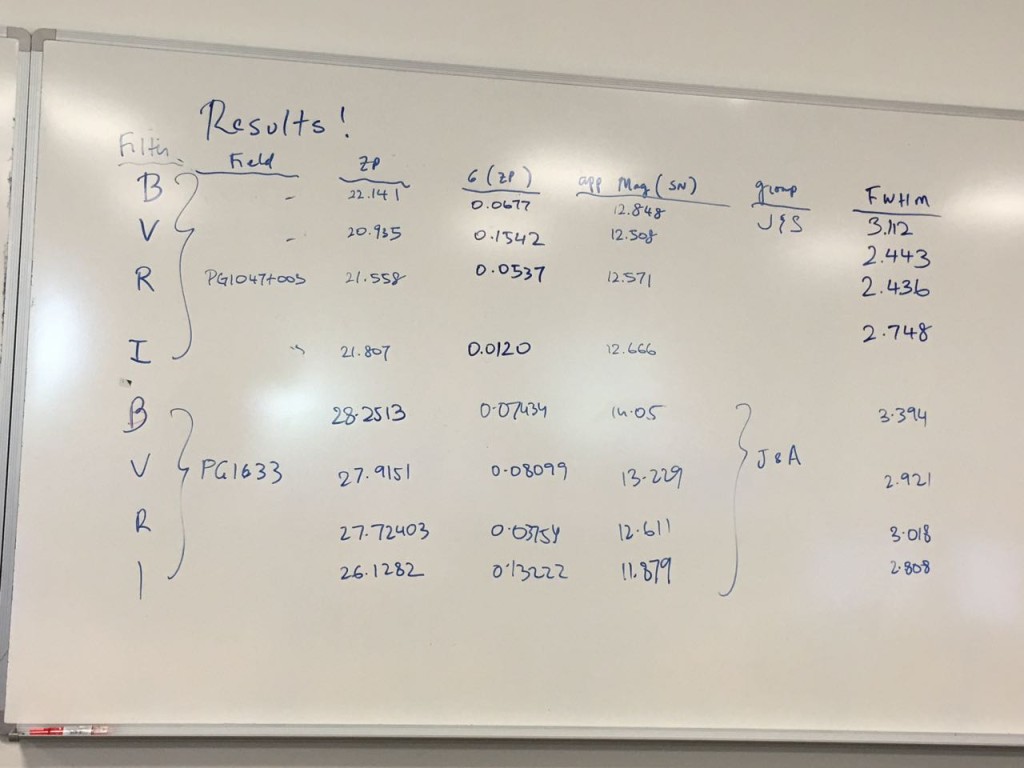 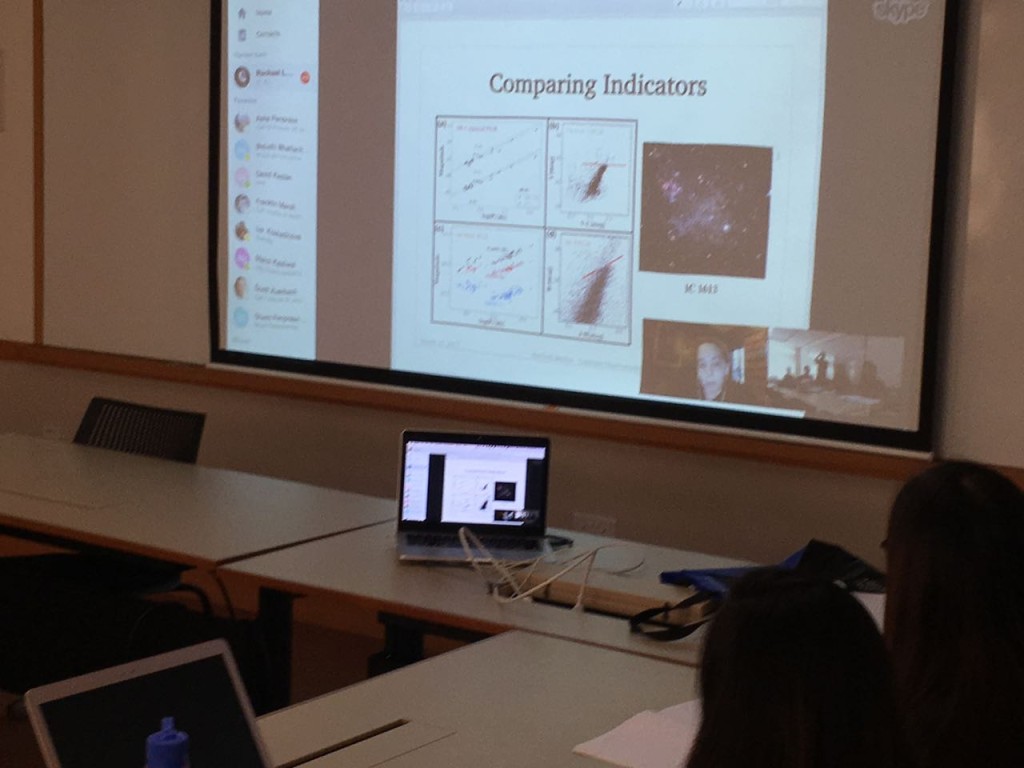 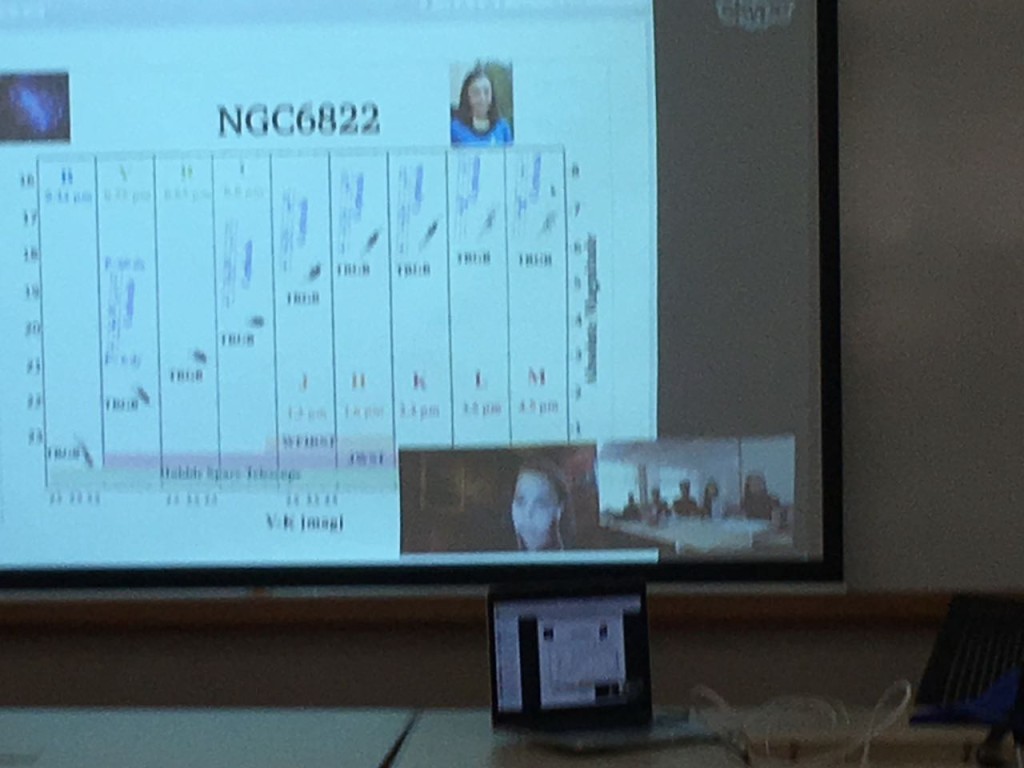 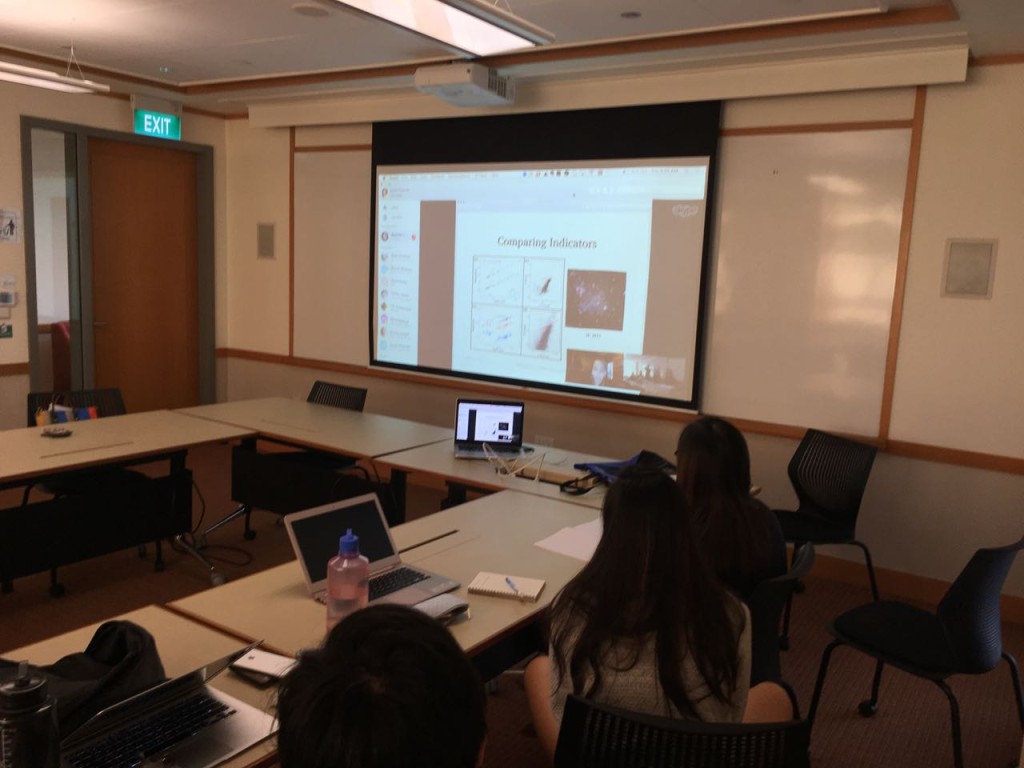 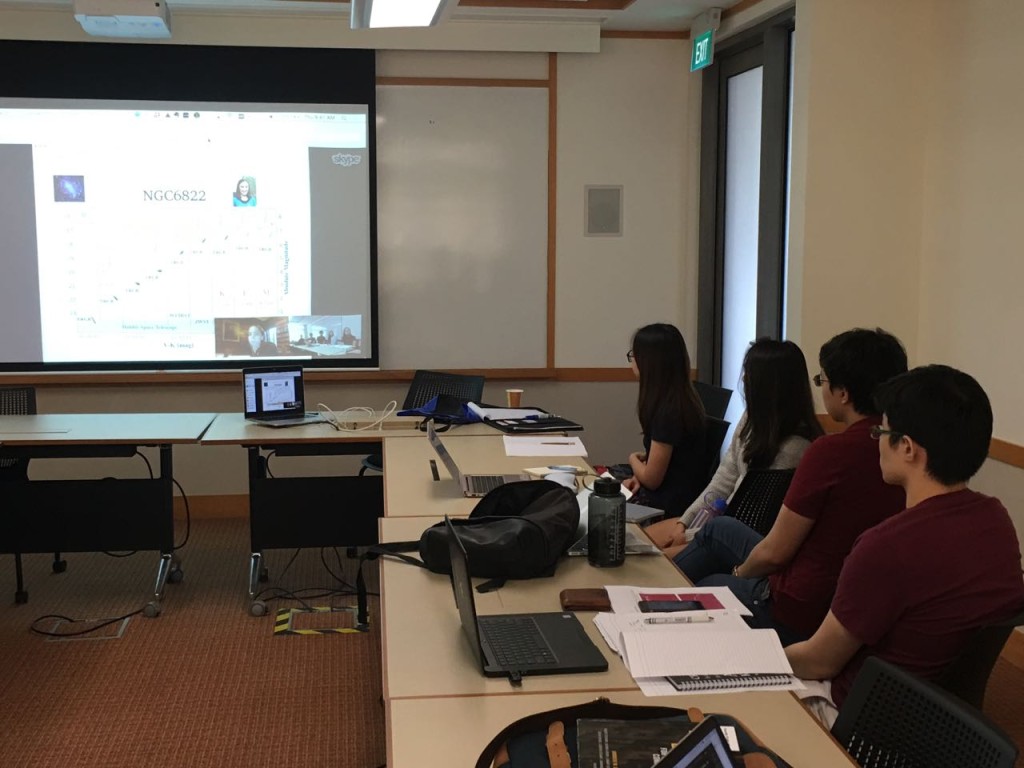 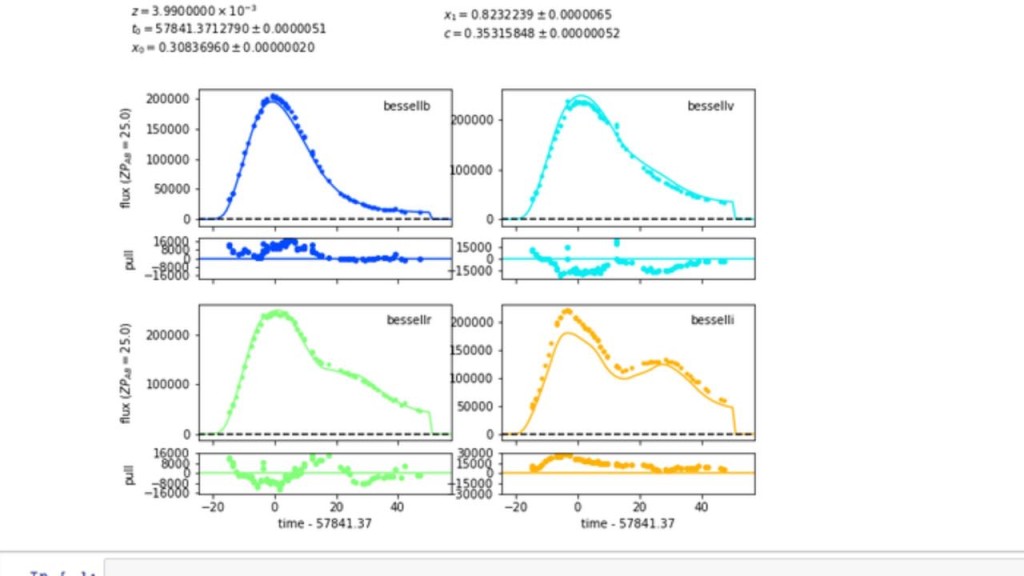 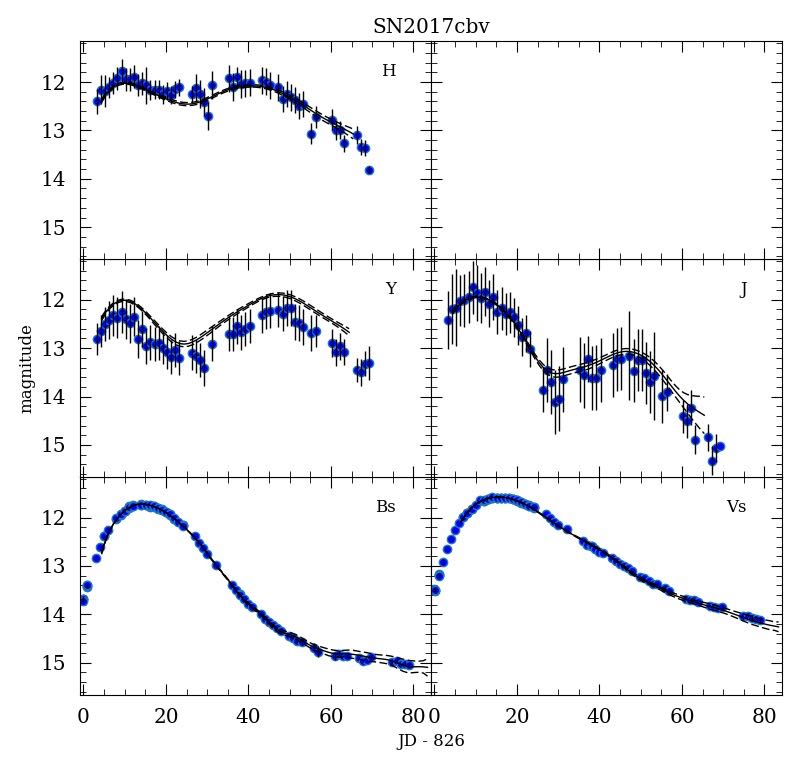 The class immediately took to the project and we shifted toward observations of the supernova as a class project. Our group of three students – Joanna, Jerrick and Nilotpal, met regularly during the rest of the semester, along with our Yale-NUS senior Rohan Naidu. With the students, I was able to learn how best to use Python, astrometry.net and other tools to automate the process of acquiring magnitudes of the supernova, and to plot them. We also began a collaboration with the Carnegie Observatories – and look forward to working with them this summer. Below are some of our light curves from the supernova – and we are extremely excited to be involved. Nearby Supernovae like this one are somewhat like a “Rosetta Stone” of the cosmic distance scale. Within the galaxy one can detect Cepheid variable stars, and also measure the “Red Giant Branch” by gathering images with 1000’s of stars. The TypeIa supernova is the premier mechanism for measuring the distances to the farthest galaxies. Within a nearby TypeIa supernova it is possible to calibrate the supernova against two other distance indicators – the Cepheids and the Red Giant stars. Our group is working with Ben Shappee and Rachael Beaton from Carnegie Observatories and we hope to get a paper together soon! At this point we have worked out the details of the star’s initial detonation – the timing of the arrival of the first photons was on March 9, and our team and the Carnegie team started getting data one day later with LCRO and then every night afterwards through July with our Yale 1.3-meter telescope in Chile. This means that we began observing the supernova about 19 days before maximum light – one of the earliest observations for a supernova ever!  It is also important to note that while we first detected this event on March 10, the actual explosion actually happened over 50 million light years ago!  You can see our latest light curve (from June 2017) below. 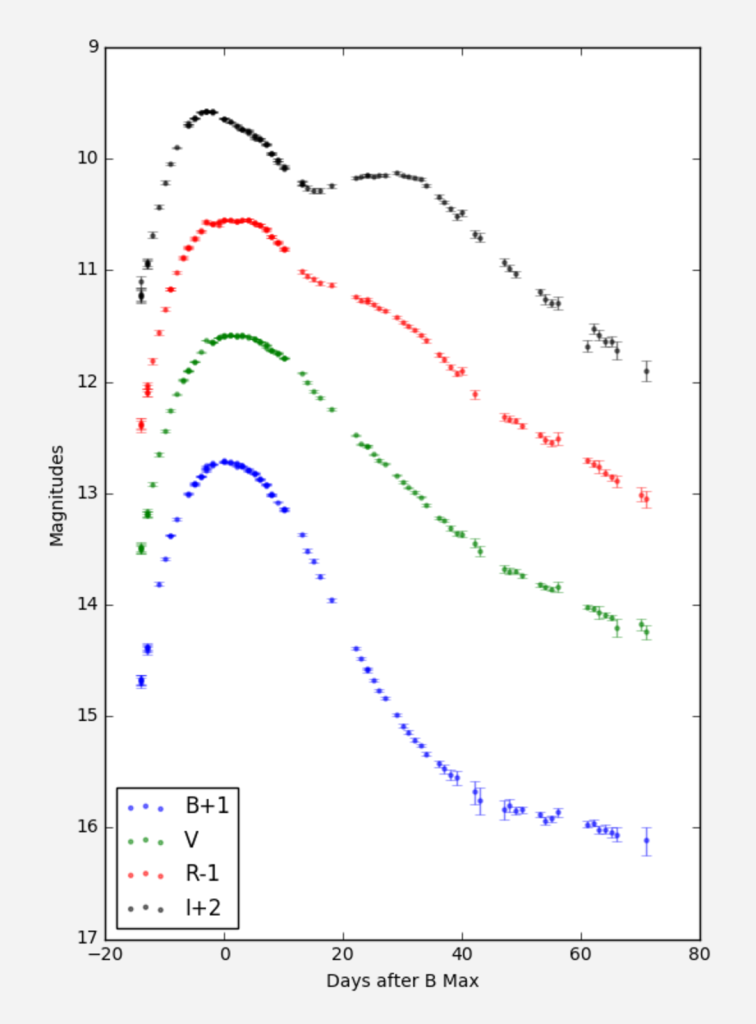