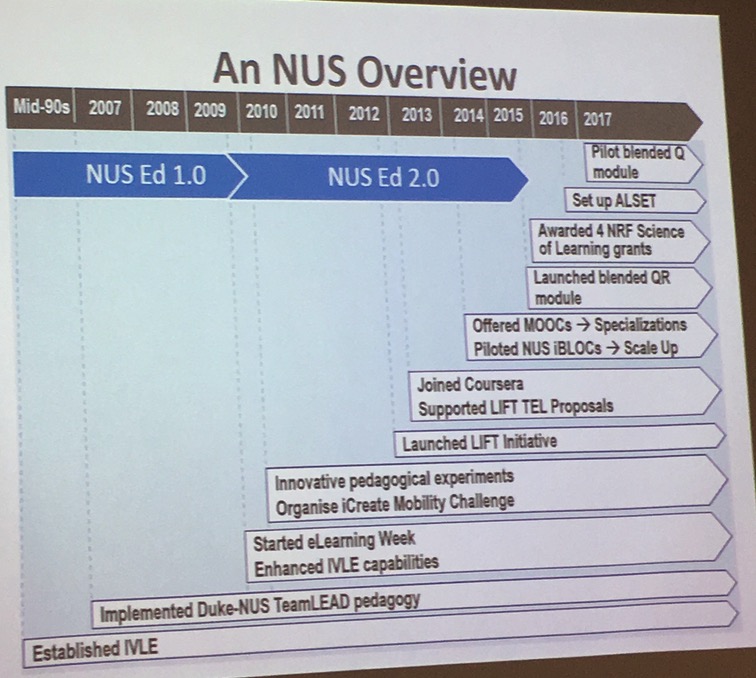 On November 16, the Provost of NUS convened a day of talks on Technology in Higher Education, which featured a wide range of presentations on tech-enhanced teaching, use of virtual reality in classes, and online education. It was a great way to learn more about the innovations at NUS and some of the new NUS learning science initiatives. A schedule of the event lists some of the great talks during the day, which included a talk by the NUS Provost, presentations of LIFT technology grant award winners, information on the Ministry of Education (MOE) Tertiary Research Fund, and a mix of talks on innovations and the new NUS institute for the Application of Learning Science and Educational Technology known as ALSET.

It was interesting to learn more about the history of NUS and its approach to innovation. The Provost provided a timeline (shown below) that indicated the ways in which NUS education has been steadily strengthened in its approach by technology. Important milestones include the mid-90’s IVLE Learning Environment, the 2007 Duke-NUS TeamLEAD pedagogy implementation, 2012 Educational Technology LIFT grants, and then by 2014 new NUS-internal online courses known as NUS iBLOCs were implemented, along with several open MOOC courses through the Coursera platform. The currently offered NUS Coursera Courses include stand-along MOOCs such as Reason and Persuasions: Through Three Dialogues by Plato and Write Like Mozart: An Introduction to Classical Music Composition.  A notable development in the past two years are several NRF “Science of Learning” grants, and the new institute known as ALSET, headed by the Duke-NUS Medical School associate provost Bob Kamei. 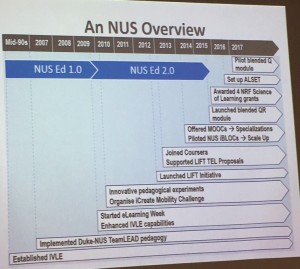 The NUS administration is also interested in empowering faculty by developing a “Learning Eco-system” – which includes their Centre for Teaching and Learning (CDTL) and Center for Information Technology (CIT) which offer workshops for faculty known as TEL workshops. The NUS administration also has begun creating more Active Learning (TEAL) classrooms, and currently has 48 of them on campus. 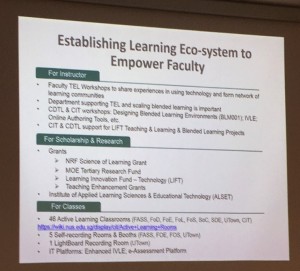 The approach that NUS takes to innovation involves moving with pilot programs and then “Scaling Up What We Do Well” – a pattern shown throughout the past 20 years with initiatives of all kinds – NUS Overseas Colleges, the NUS Engineering Design-centric program, and even the Yale-NUS College. This has led the NUS leadership to consider the NUS approach as NUS Education 3.0 – building on the two earlier periods of growth in educational technology and learning science initiatives. 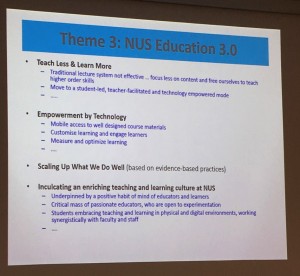 A lot of the approach at NUS involves promoting Lifelong Learning and developing 21st Century skills. This is now part of the NUS general education requirements, and is the inspiration for many of the NUS initiatives, including the Yale-NUS College. During my time at Yale-NUS, I have been very grateful for the chance to help implement a curriculum which is based on these types of skills which are increasingly relevant to solving the complex, interdisciplinary problems facing the world. Within this framework is the oft-cited “Fourth Industrial Revolution” theme, which includes the development of steam power around 1787, the division of labor and manufacturing around 1870, the development of automation and computers around 1970, and now the emergence of “systems thinking” and new technologies that embody multiple sciences such as nano-technology, artificial intelligence, new materials and synthetic biology. This leads many to realize that not only will fewer jobs be created (due to automation) the types of jobs will change dramatically – with a corresponding need to retool higher education to meet these new demands. 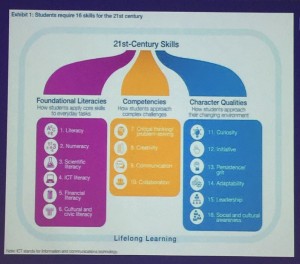 Some of the new developments in education such as “nano-degrees” (pioneered by Udacity and other MOOC providers), and “just in time training” demanded by corporations for updating their workforce skills suggest that new formats for courses – both online and in person – might be a welcome change to meet these rapidly shifting demands. The NMC Horizon Report was cited as one example of how higher education might respond, and how hybrid instruction might be able to adopt a philosophy such as “teach less, learn more” and to “move to student-led, teacher facilitated, and tech-empowered” forms of teaching.  The rest of the day included presentations that showed how NUS is responding, using flipped classes, virtual reality, and interesting problem-based learning implementation of a wide range of topics in its curriculum.