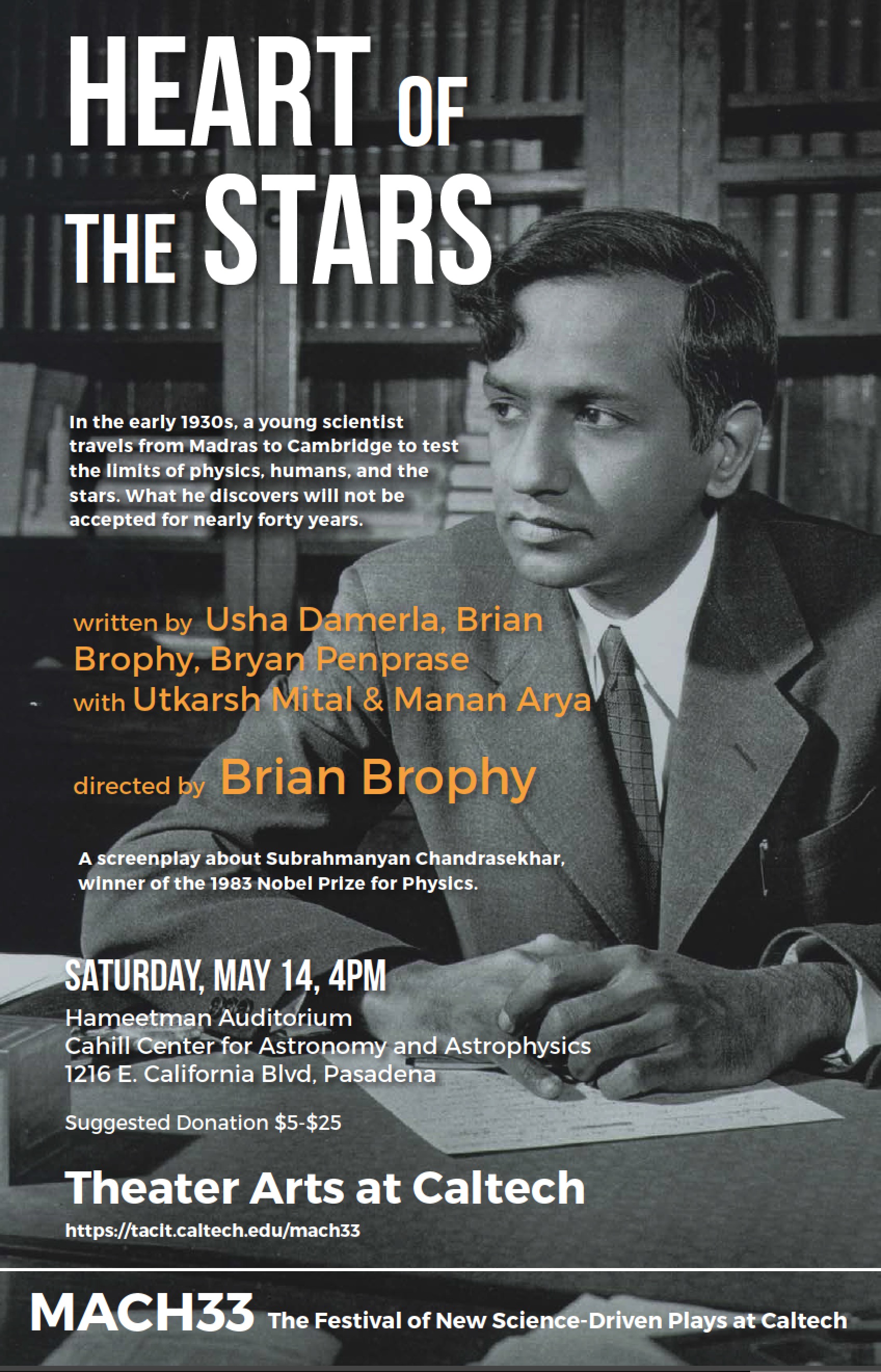 One really interesting outgrowth of the Liberal Arts in India project is a new theatre production, co-authored with Brian Brophy (Caltech) and Usha Darmela (O.P.Jindal), about the life of Subramanyan Chandrasekhar, India’s leading astrophysicist of the 20th century and Nobel laureate. Brian Brophy is a noted actor and theatre producer, and he attended our Liberal Arts in India conference in New Delhi in 2015, where I met him and we hatched this idea. The drama and passion of Chandrasekhar’s life is striking – he left India as a young man in 1930, where he left behind his famous Nobel prize winning uncle, C.V. Raman, his ailing mother (who was to pass away soon afterwards), and the love of his life Lalitha. Thrust into the unknown world of Cambridge England, Chandrasekhar immediately made a deep impression on all who met him with his penetrating insight into the ways that stars work. He worked out on the boat ride to England some key calculations which unlocked the secret of the “Heart of the Stars” – where crushing densities and searing temperatures push matter beyond any conditions known or previously imagined.

Chandra’s mind, and his immaculate and inspired calculations, were able to reveal how deep inside stars the newly discovered physics of relativity and quantum mechanics merge together. This causes the atoms deep inside some stars, like white dwarf stars, to become “degenerate” – which as the mass of the star increases requires the atoms to move faster and faster until they become relativistic, or approach the speed of light.

A section in Chandrasekhar’s Nobel Prize speech describing the limiting mass of a self gravitating star, which includes the mathematical form of the “Chandrasekhar Limit” – about 1.4 solar masses for a star made mostly of Helium.

The phenomenon of relativistic degeneracy, first described by Chandrasekhar in 1930, is what prevents white dwarf stars from collapsing – but only if their mass is below a certain mass threshold. This limit to the mass of a white dwarf is now known as the Chandrasekhar Limit, and is at about 1.4 solar masses. The astrophysics now is well established, but at the time was deeply troubling and threatening to the astrophysical establishment. It placed the future of a large number of stars in jeopardy, and suggested that some stars could collapse to form objects with unlimited density – the black holes!  The “absurdity” of such singularities caused the most eminent scientist of the time, Sir Arthur Eddington, to publicly repudiate Chandrasekhar’s brilliant analysis, ridiculing it as “stellar buffoonery” in a pivotal Royal Society meeting in London. 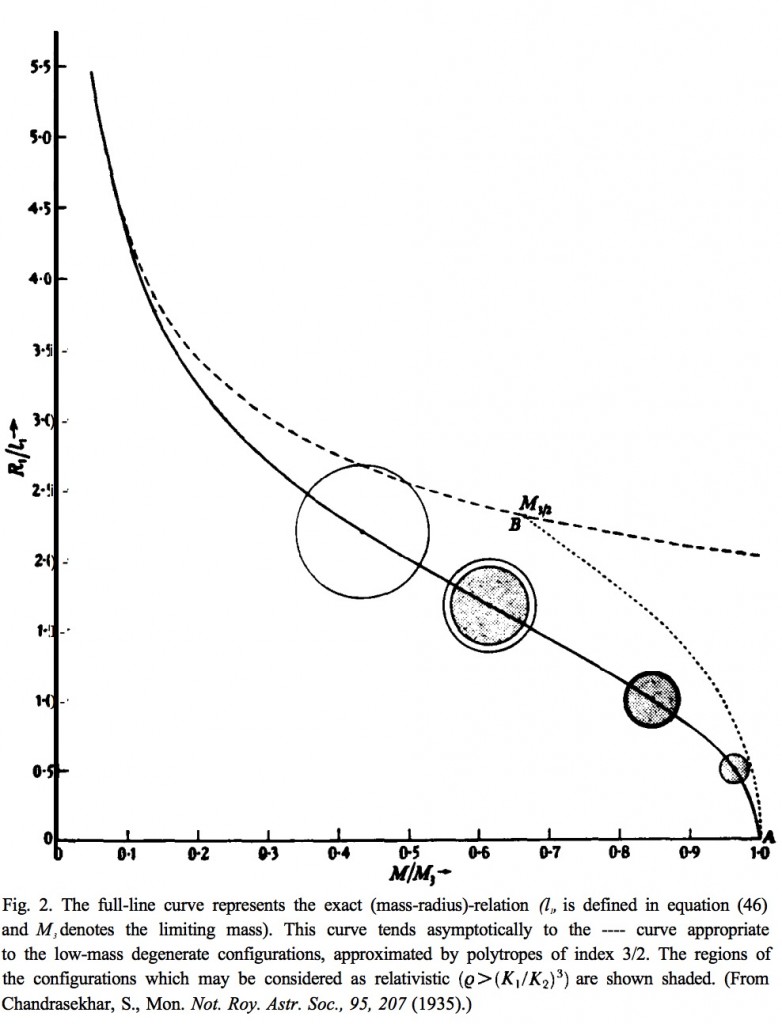 Graphical description of the radii and masses of stars as they approach the Chandrasekhar Limit, from one of Chandra’s early works on the subject, written while he was a Fellow at Trinity College, Cambridge.

The drama of the story naturally lends itself into what should be a beautiful play, and hopefully also will be a movie script! The middle of the story is Chandrasekhar’s humiliation at the hands of Eddington, and his courageous revival with the help of Lalitha, and their triumph in the end after 50 years in the US, where not only were all of Chandrasekhar’s calculations shown to be exactly correct, but to predict neutron stars and black holes, a half century before they were observed. In his Nobel Prize banquet speech of 1983, Chandra quotes Rabindranath Tagore’s poem Gitanjali, in what may perhaps be referring to his own “re-awakening” after his arrival to the US,  to a place where “knowledge is free” and “where worlds come out from the depth of truth:”

Where the mind is without fear and the head is held high;
Where knowledge is free;
Where words come out from the depth of truth;
Where tireless striving stretches its arms towards perfection;
Where the clear stream of reason has not lost its way into the dreary desert sand of dead habit;
into that haven of freedom, Let me awake.

The drama, and power of the story needs to be heard, and I am looking forward to working with Brian and Usha to bring Chandra’s life to a larger audience through theatre and perhaps even a movie!  It is a great vehicle for teaching about astrophysics through the life of an amazing scientist who is a symbol of Indian intellectual culture, and perhaps most of all a passionate human being who was motivated by his love of beauty, his love of truth, and the love of his life, Lalitha. This sense of aesthetics figures into some of the speeches Chandra has given over the years about Shakespeare, Newton and Beethoven, where he equates the creativity of art and music to that of the scientist. Ultimately he is on a quest for beauty, which he encapsulates in both simple and beautiful words at the end of his 1983 Nobel Prize lecture:

The play is coming together, and is a wonderful way to pay tribute to Chandrasekhar, and embody some of Chandra’s own liberal arts spirit – that blended his science with a deep love of the arts, music and literature. On May 14, Brian Brophy also had a reading of the play with a group of Caltech students and faculty. The poster for that event is below. 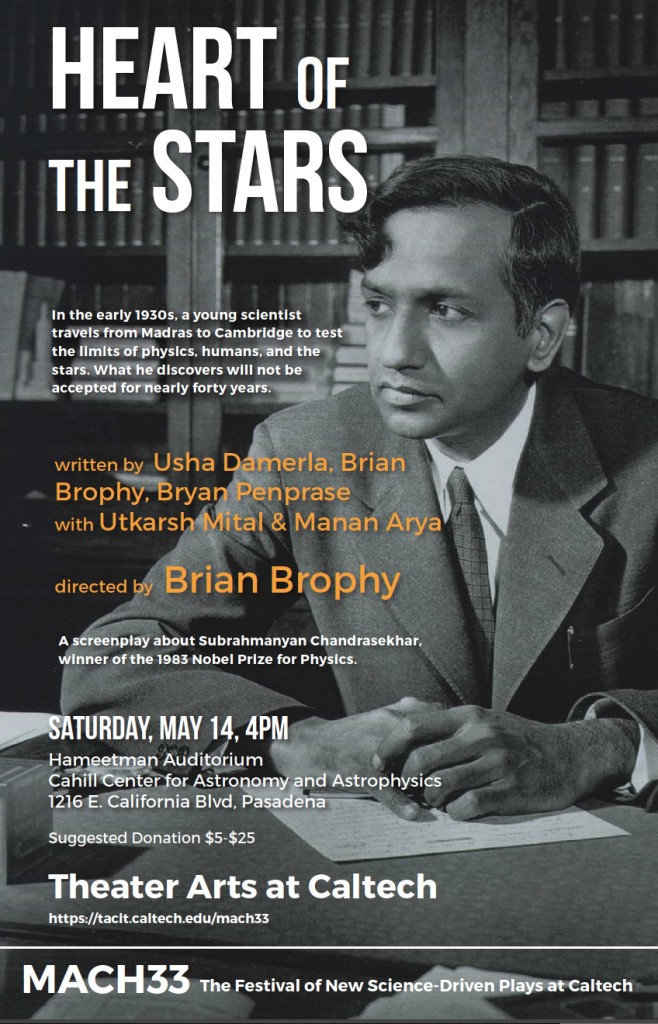