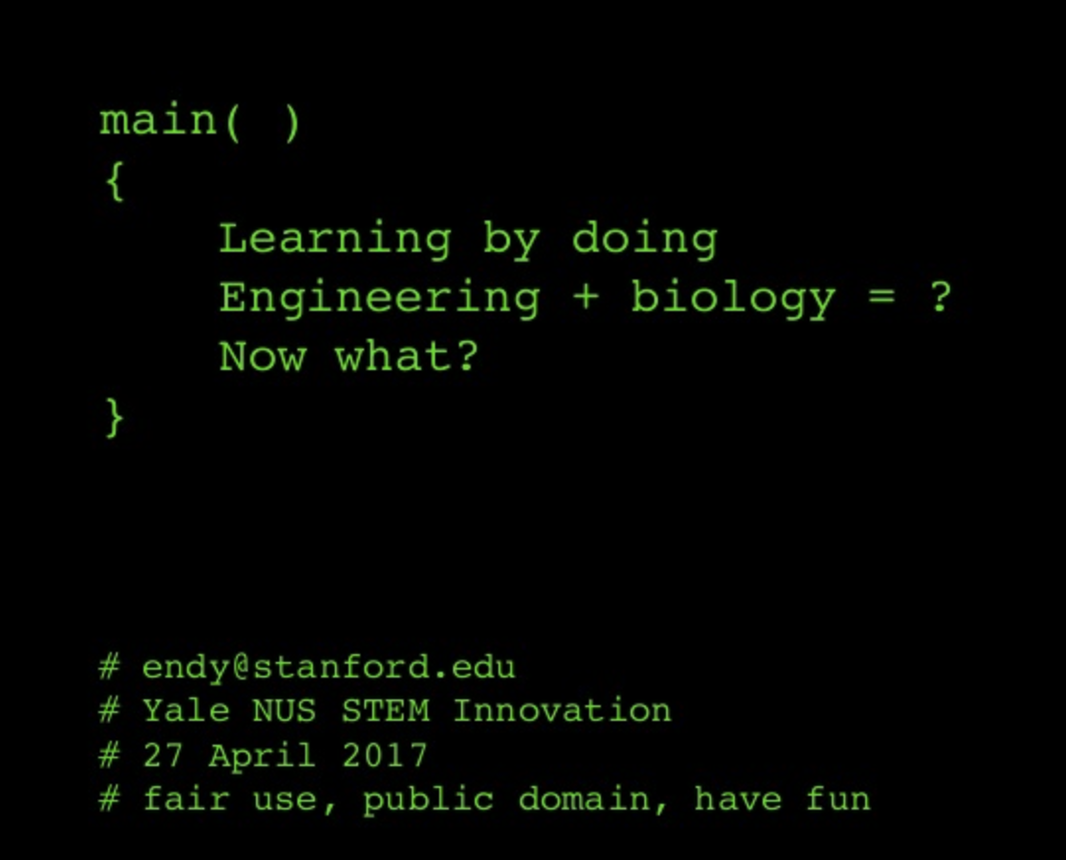 Day 1 of our STEM conference on April 27 featured a number of remarkable presentations, which were kicked off by a talk by Drew Endy (Stanford) entitled “Learning by Doing – Lessons from the Frontiers of Engineering and Biology.”  The slides for that lecture are online at this site: https://www.slideshare.net/DrewEndy/learning-bioengineering-by-doing. In the talk, Drew focused on the development of bioengineering, and its roots in his experience at MIT. He reviewed how humans have been doing bioengineering through the centuries in domestication of animals and development of crops but also drew a contrast with the new development of patented organisms, and the huge explosion of new capabilities that will bring about expansive economic opportunities and cures for diseases and world problems. In his approach, Drew underlined the importance of focusing a curriculum around motivation and mechanisms instead of details. In this effort avoiding jargon is key, and he pointed out how the words “vector” “expression” and other terms have vastly different meanings in engineering and biology. Within bio-engineering is the opportunity to train students to cure diseases, save environments, understand and debug natural environments and even to design and build natural organisms.

Drew promotes a Design/Test/Build approach to synthetic biology, and also the developments of standards to enable rapid exchange of ideas within the field. He likens the effort to playing with a “4 key keyboard” to create all the organisms within nature and beyond. This can be used to create systems, devices and parts of organisms, as well as entirely synthetic creatures. In his experience developing the IGEM program at MIT, Drew was inspired by Paulo Freire’s “Pedagogy of the Oppressed” where the learning is to be treated as “a co-creator of knowledge.” He documented the growth of IGem from its origins in 2003 at MIT when it was a handful of people to 2015 when there were literally hundreds of teams, thousands of students and dozens of countries participating. The iGEM is a prime example of active and authentic learning, as students use research tools that create new organisms and cures. He documented several “biological parts” and products that arose from iGEM competitions, developed and patented by students. At Stanford, Drew has offered a course called Bioengineering 44, the “Fundamentals for Engineering Biology Lab.” This course has developed student abilities to extremely high levels, and Drew shared assessment of how student confidence in their abilities grew in many levels. He assesses student competency by a Likert scale where students can range from complete ignorance of a subject to levels where they can teach other students a topic. This Bioengineering 44 course was followed by a course Bioengineering 80 – “Introduction to Bioengineering (Engineering Living Matter)” – in which the entire class takes part in an effort to make a new lifeform. Drew describes this as “creating life” – an amazing course goal to have for an undergraduate intro course!  In this final project Drew describes how they will design up to “10,000,000 base pairs of DNA in 2,000 bp chunks.” The course included an investment of about $200,000 but allows students to “express their designer DNA in a test tube and use mass spectrometry to see what molecules it makes.” As Drew says in the final project description, “Our collective goal is to construct life.” Within the course students learn to write simple scripts in Python, annotate DNA, estimate storage capacity for genetic material, and other very advanced learning goals. Drew used Slack to communicate within his course teams and with his TAs. This course was followed by an innovative course LAW 4014 – “Law, Technology and Liberty” which joined bioengineering experts at Stanford with legal scholars from the Yale Law School.
In the final part of his talk, Drew made a case for freedom in biotechnology – an “open source” approach. He likened this to freedom to read and write – which all would grant is a benefit for a democracy. In Drew’s idea, reading and writing and DNA manipulation all should be guaranteed to all citizens to preserve freedom and to allow all to participate in “using the language” of life – DNA. It is a provocative idea, and one that leaves us all with a lot to think about!
Other talks on Day 1 included a diverse mix of talks in three parallel sessions. Parallel sessions included a QR symposium, a Biology and Life Science Education session (featuring Yale-NUS profs Ajay Muthuru and Jan Gruber, shown below) and a Physical Science education session. After lunch we enjoyed excellent plenary talks from Sandy Cook (Duke-NUS) and Matt Stamps (Yale-NUS). Sandy gave a wonderful overview and demonstration of her TeamLEAD team-based learning pedagogy, employed at Duke-NUS for over a decade now. Her demonstration included having us assemble in small teams and work together to answer quiz questions based on her first 15-minute mini lecture. It was wonderful that she embodied her philosophy of education and did not lecture about her active learning pedagogy . She stressed the values of TeamLEAD, which was developed by experts in Medicine and Business, as it helps students work cooperatively in high performing teams which better emulates their working environment. 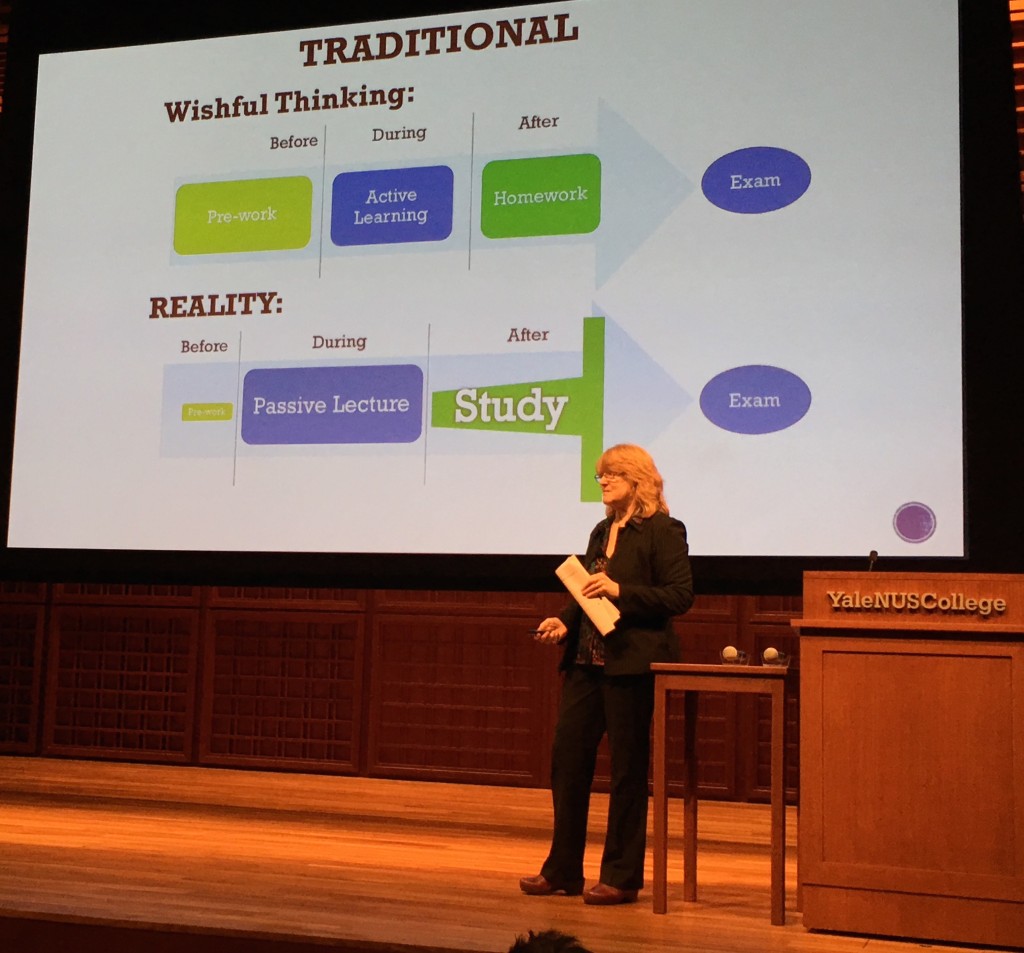 Matt Stamps also gave a fine plenary talk about his innovative work in Mathematics pedagogy at Yale-NUS College. Matt uses a program called “Strengthsfinder” to evaluate his students, and also assembles them into teams within his Math classes. This program is able to help students identify their ability to execute, think strategically, build relationships and influence others. By bringing in this program into his teams he is able to help students grow personally as well as develop skills in mathematics.  He also has been using a program known as WebWork to develop automatically graded customized math problems for his students, using a Teaching Innovation grant from our Yale-NUS College CTL. 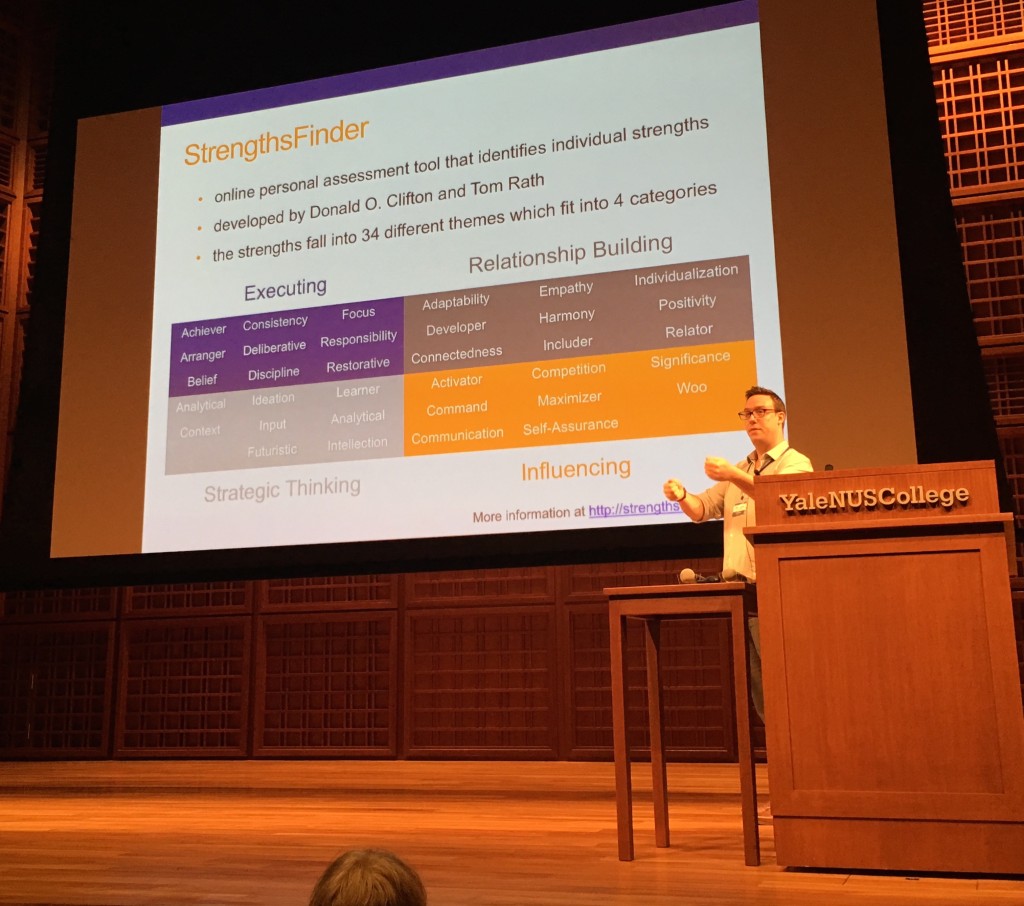 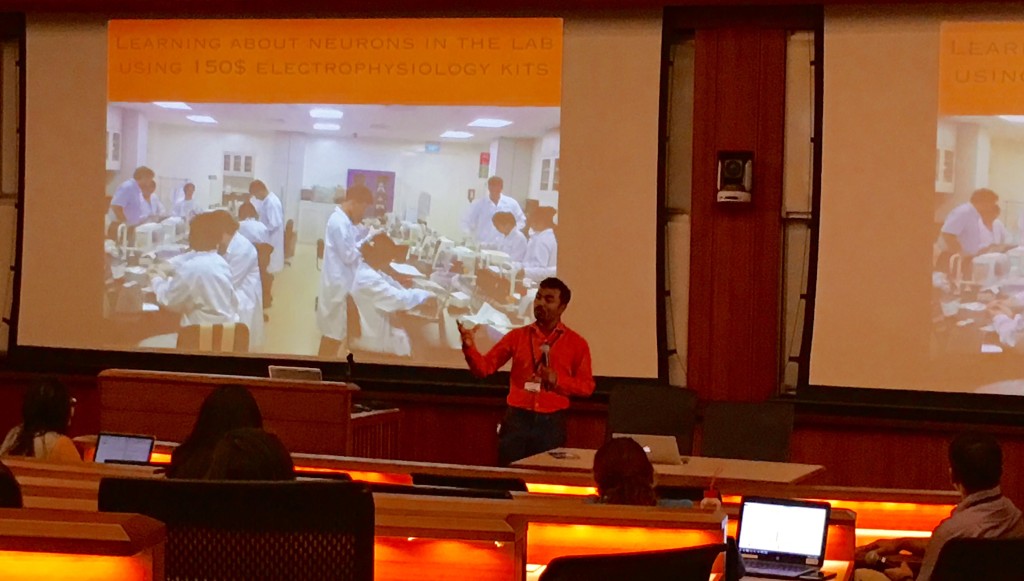 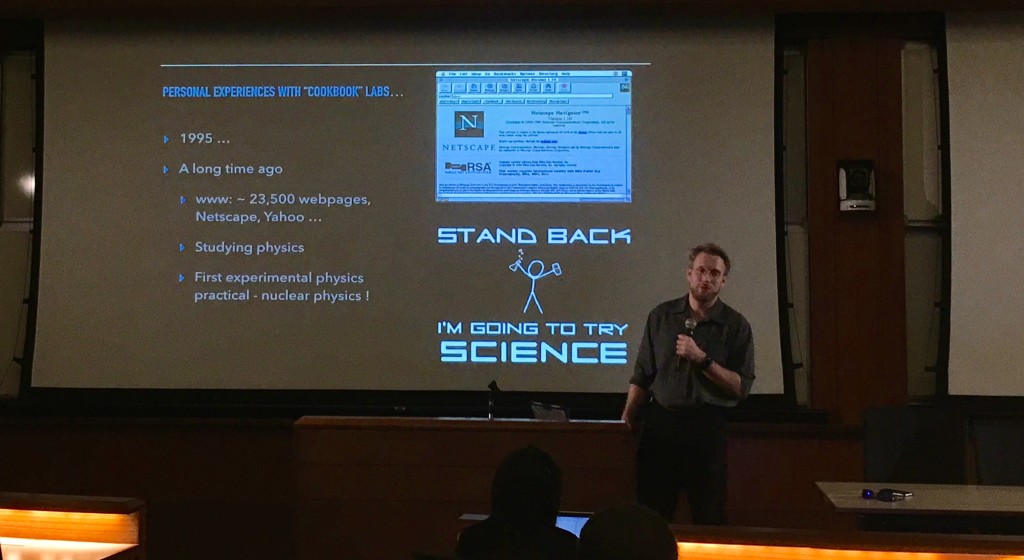