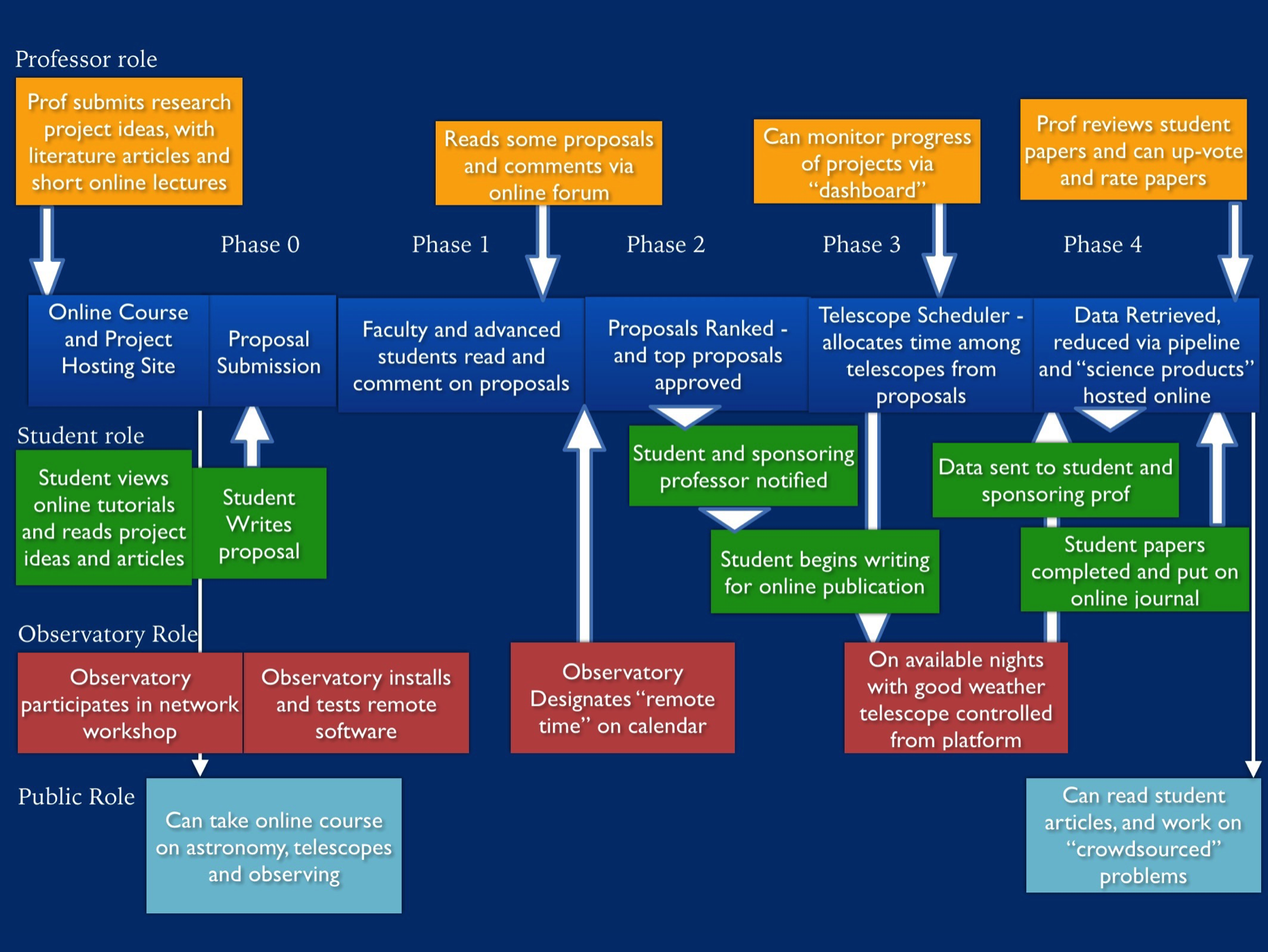 After classes finished at Yale-NUS College, I made a visit to two of my favourite cities in India, Bangalore (home of the Raman Research Institute and IIHS), and Pune (home to the IUCAA astrophysics Institute). The trip to Bangalore and Pune allowed me to meet with some of my collaborators both in astrophysics and from our work with the Liberal Arts and Sciences in India. In Bangalore, I met with the director of the Indian Institute for Human Settlements in Bangalore, Aromar Revi, who described some of the new programs at IIHS, and updated me on their plans to expand their institute into undergraduate education. At present the IIHS offers a Master’s degree in Urban Practice and conducts research on cities and urban areas within India and beyond. Aromar is also a member of the IPCC group studying global climate change. We had a great discussion about IIHS, global warming, and the future of liberal arts in India. While in Bangalore I also had a great visit with Lakshmi Saripalli at the Raman Research Institute, and we discussed her recent work in astronomy and our future plans for meetings on the Liberal Arts in India.
After Bangalore, I met with my friend Somak Raychaudhury, the Director of IUCAA in Pune and long-time collaborator in the Future of Liberal Arts in India. We discussed new programs at IUCAA, the new Indian AstroSAT astronomical satellite, and the possibility of development of remotely operated telescopes within India for undergraduate research and teaching. Somak was interested in developing small remotely operated telescopes at the IUCAA observatory in Girawali (http://igo.iucaa.in/) – and we made a plan to develop a pair of small telescopes in this site about 100 km north of Pune to enable students from across India and beyond to remotely acquire data to develop their own research projects.
My wife Bidushi and I gave a talk at IUCAA about astronomy and space tech in Singapore and shared the work that we have been doing at her Space company known as Bhattacharya Space Enterprises. I talked about our work with the recent supernova and other observational projects I have been doing at Yale-NUS with my students. I also outlined a system for remote observations that can help foster a global undergraduate collaborative research community in astronomy, through a networked platform that combines tutorials in astronomy education, observational proposal submission, and telescope scheduling. The system would allow for a group of students to plan, propose and implement their own research projects in observational astronomy using a network of telescopes across the earth. An outline of how the system might work is shown below – and I hope to develop this platform to link students from the US, India and other countries to operate a global network for undergraduate research in astronomy. 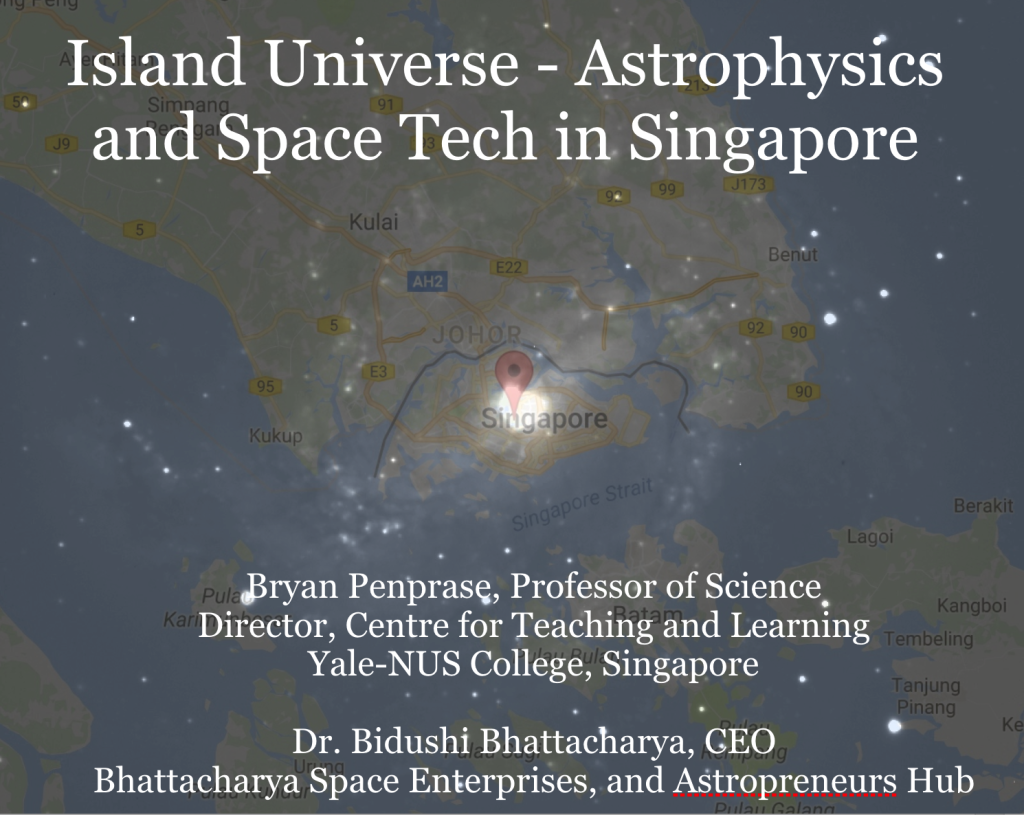 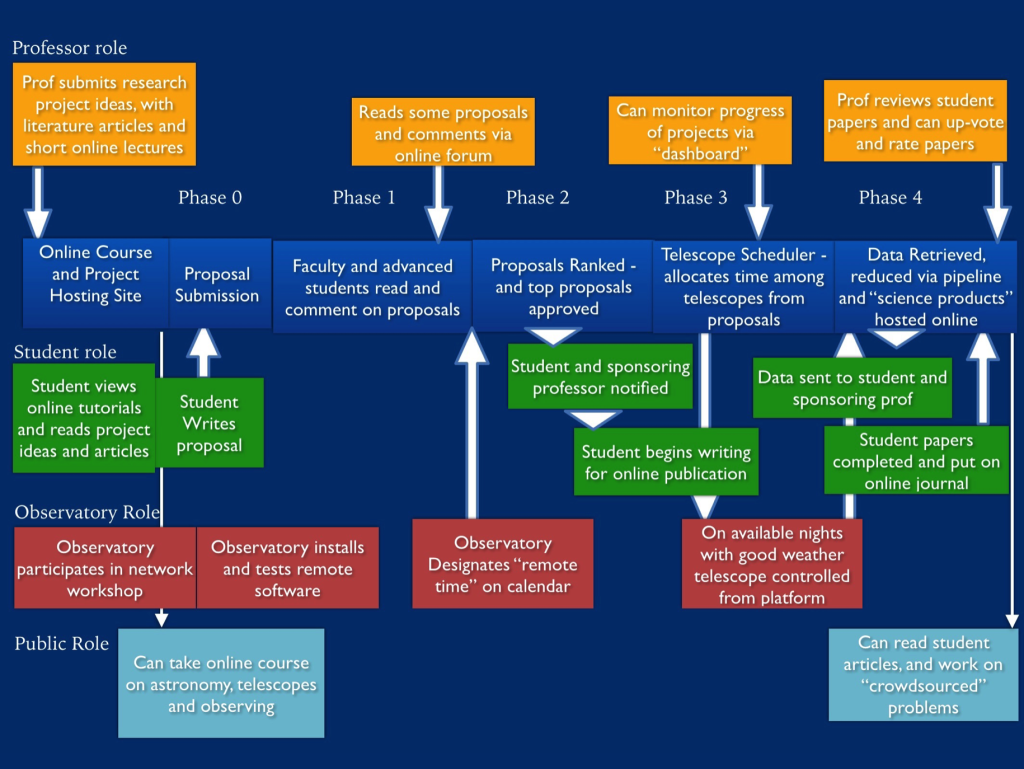 Along with the visits to research centers in Bangalore and Pune, we had a number of very interesting visits and discussions with engineers and scientists involved with space technology and astronomical instrumentation. The instrumentation group at IUCAA has done an amazing job developing the adaptive optics system known as Robo-AO, and a fiber fed spectrograph for the Indian telescopes. We met with Anamparambu Ramaprakash who showed us the IUCAA instrument lab – photos are below. It was great to see Ramaprakash, who I met at Caltech about a decade ago, when he was working in the Caltech instrument lab on Robo-AO with our Pomona College student Dan Beeler. Dan is a CTO at a startup company in the Boston area that is making advanced medical technology – another testimonial of the power of liberal arts in STEM! 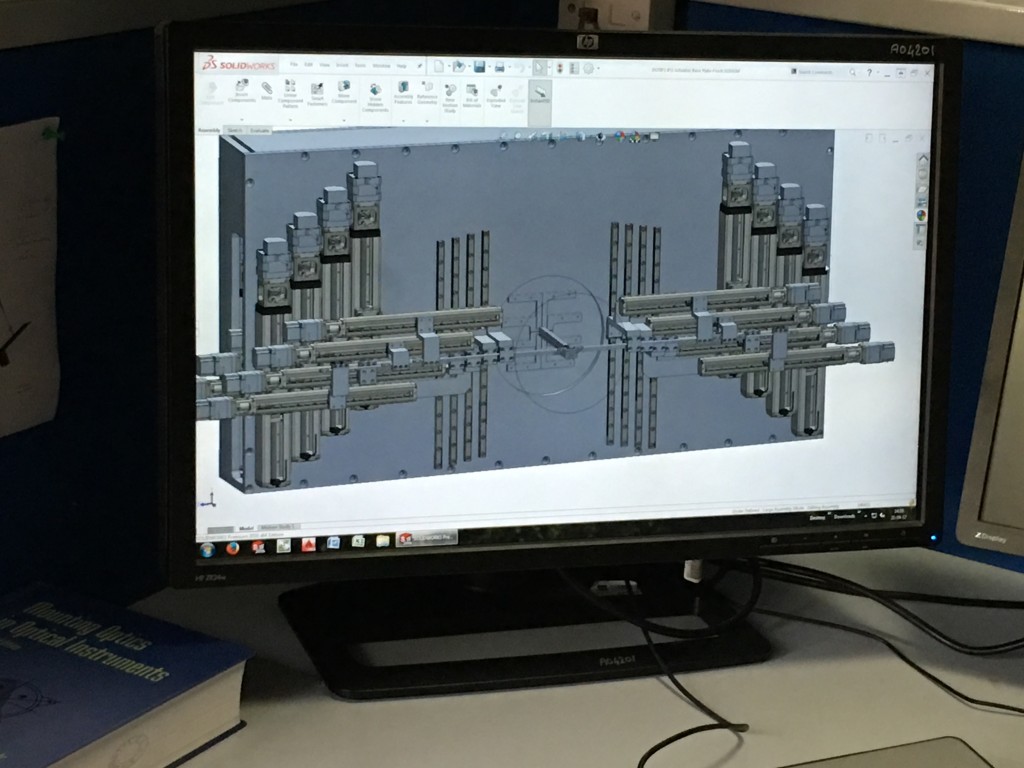 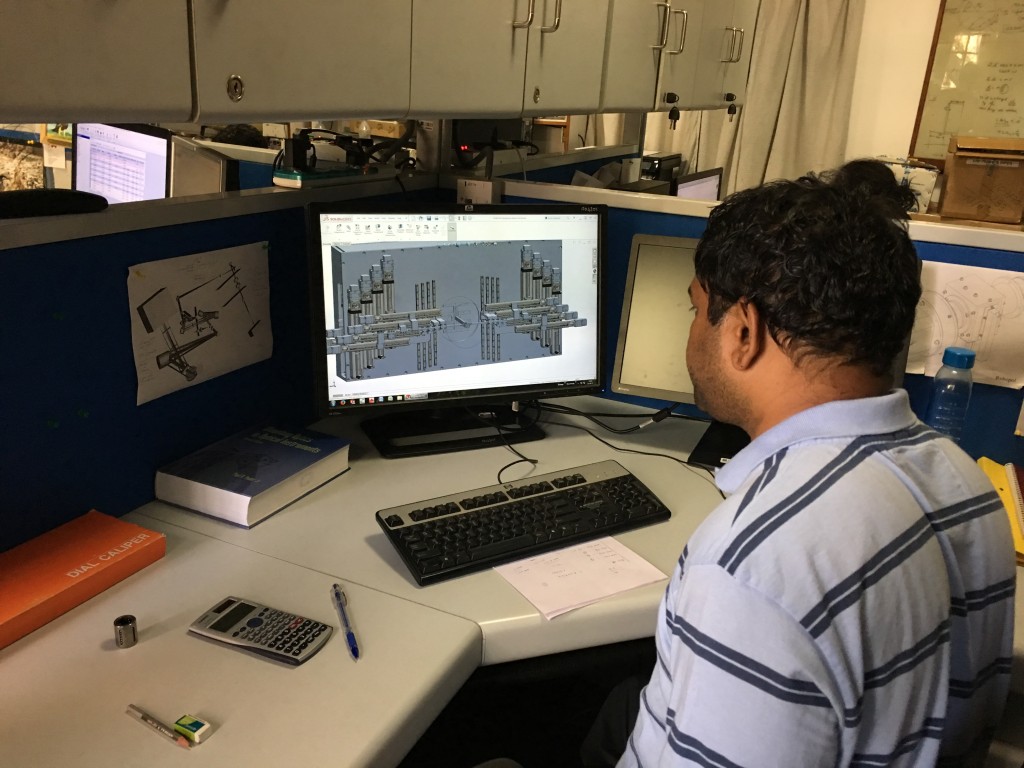 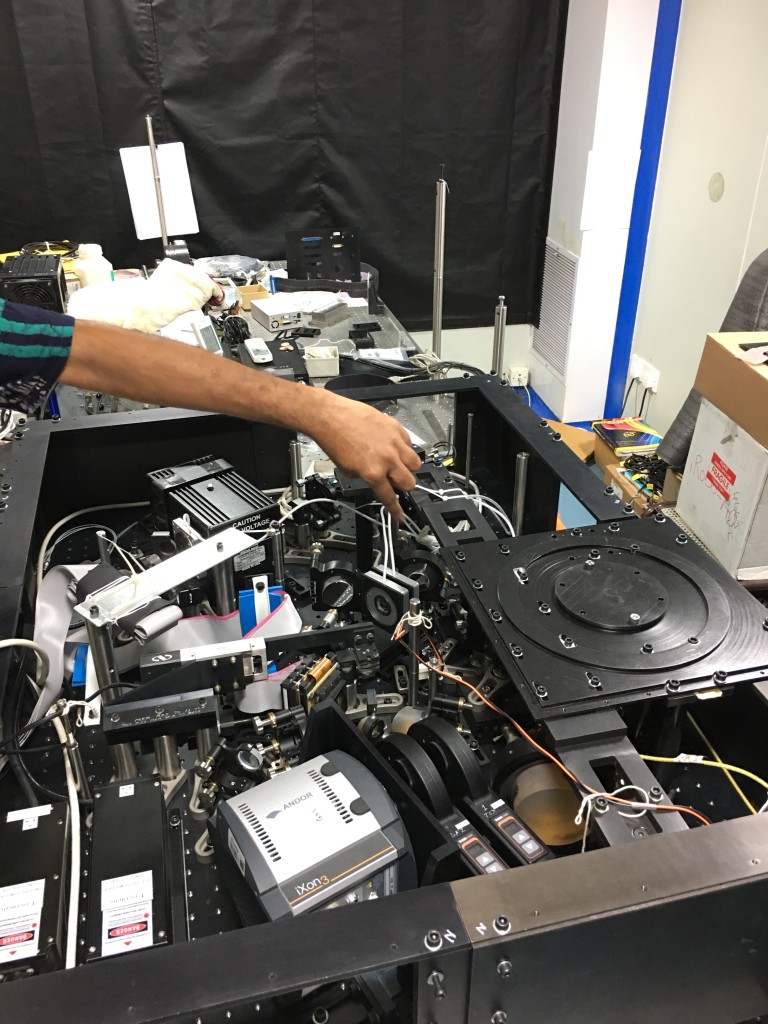 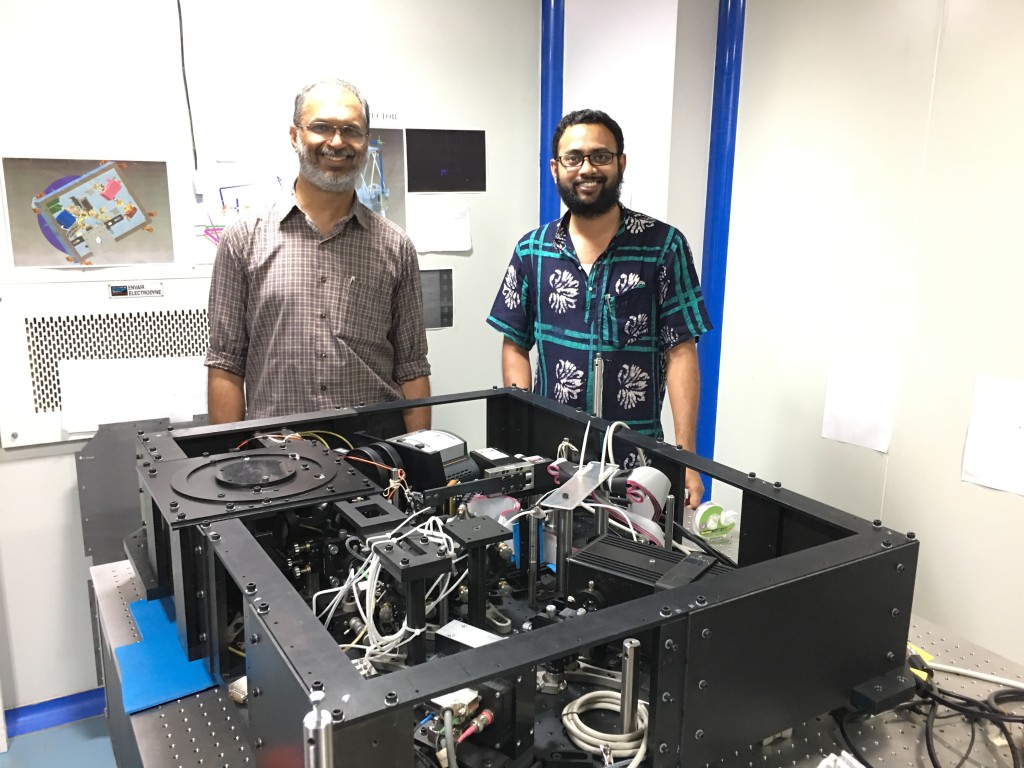 Another highlight was a series of discussions with Aafaque Khan, a young scientist and lead engineer on the Solar Ultraviolet Imaging Telescope (SUIT) on-board Aditya-L1, an Indian spacecraft. Aafaque was part of the Young India Fellowship, a Delhi-based masters program in liberal arts that was the precursor for the new Ashoka University. I discussed the latest developments at both YIF and Ashoka, and it is wonderful to see how the Liberal Arts in India has connected to a broad range of programs and institutions, and no doubt Aafaque’s broad education in humanities and social sciences from the YIF program has helped him in his work at IUCAA. From the discussion with Aafaque, I was inspired and look forward to further discussions in India about liberal arts and astronomy. We are planning a meeting at Ashoka University for March 2018 and I also hope to visit Ashoka University some time to give talks on Indian astronomy in the coming years.
Resources –
Our Talk to IUCAA – with Bidushi Bhattacharya, CEO, BSE – “Island Universe – Astrophysics and Space Tech in Singapore” – IUCAA.talk.with.bid.April.2017