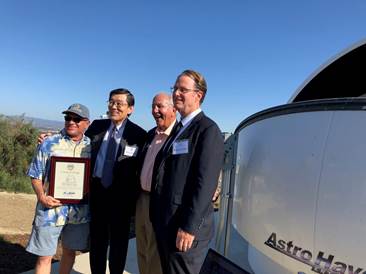 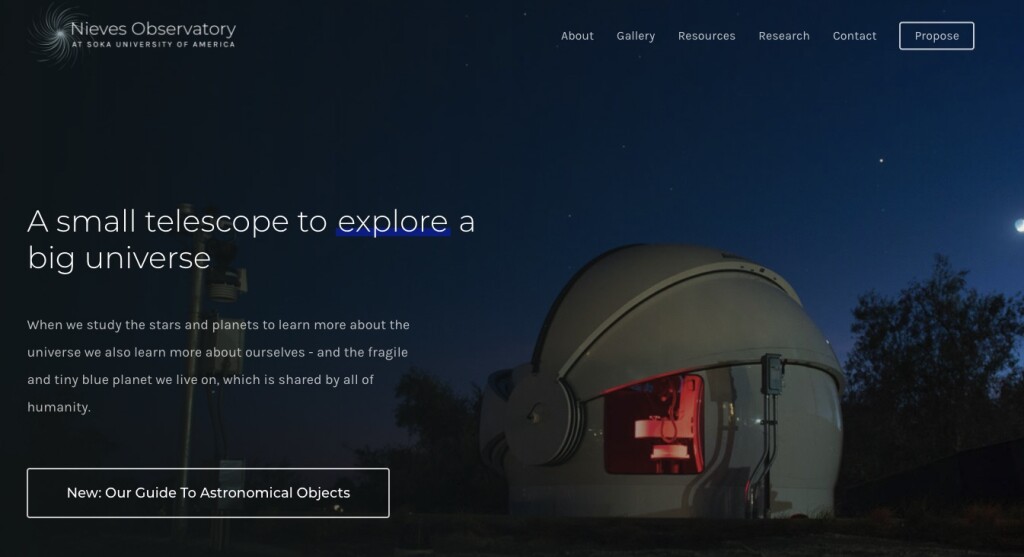 My former student from Singapore, Jerrick Wee, helped set up our website which is intended to be something like a course on astronomy for students interested in using the system. The website is available at this link – http://sites.soka.edu/SUO. The telescope has some fantastic characteristics, which for those interested in the tech – are listed below.

The CDK14 covers a 70 mm field of view without any field curvature, off-axis coma, or astigmatism. The CDK14 is a lightweight carbon-fiber truss design weighs less than 50 lbs, with 3 cooling fans blowing air throughout the back of the telescope.

Designed and manufactured by PlaneWave Instruments, the mount operates with zero backlash and zero periodic error, virtually silent motion and slew speeds of up to 50 degrees per second!

Equipped with research-grade FLI camera and a 10-position filter wheel. The camera has a field of view of 47 x 47 arcminutes. Our Plate scale at 1×1 binning is 0.7”/px, and we expect a our sensor will have Quantum Efficiency of over 50% in the mid-optical.

The camera is equipped with both broadband and narrow band filters. For broadband we have the Johnson B and V photometric filters along with the Sloan (griz) filters. For narrow-band observations of nebulae we have H-alpha, OIII, SII filters.

The telescope was dedicated and named the Luis Nieves Observatory at Soka University of America in a ceremony which we conducted on October 12, 2019. The flyer for that ceremony is below. 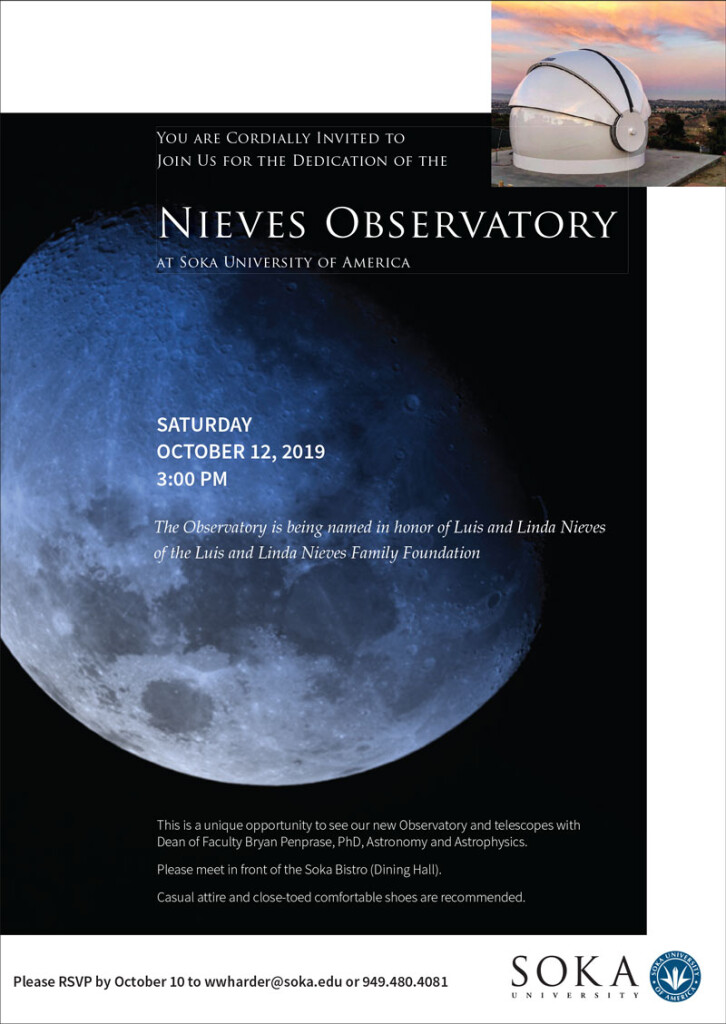 We are incredibly grateful to Luis and Linda Nieves for providing the gift to make the telescope and observatory possible. Below is a photo of myself with Luis Nieves, our University President, Danny Habuki and a representative of the local Orange County Supervisor who presented us with a plaque for the telescope.

Since then we did a wonderful set of campus events, including a “star party” which invited all the students on campus and many of our faculty to have a chance to look through the telescope. Below are some photos from the star party event in late October 2019. 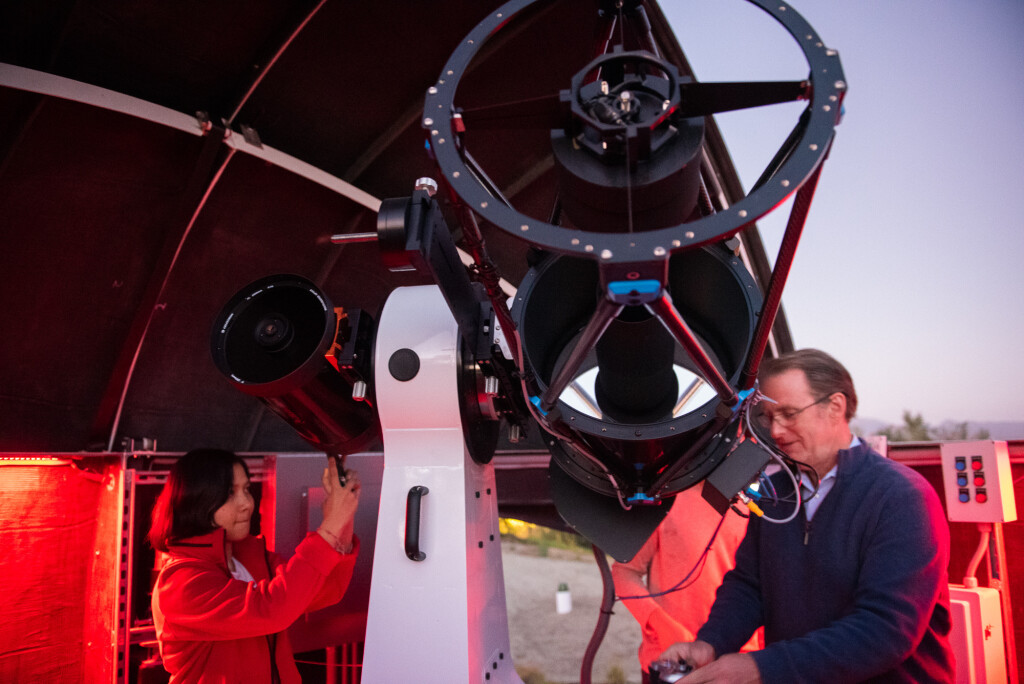 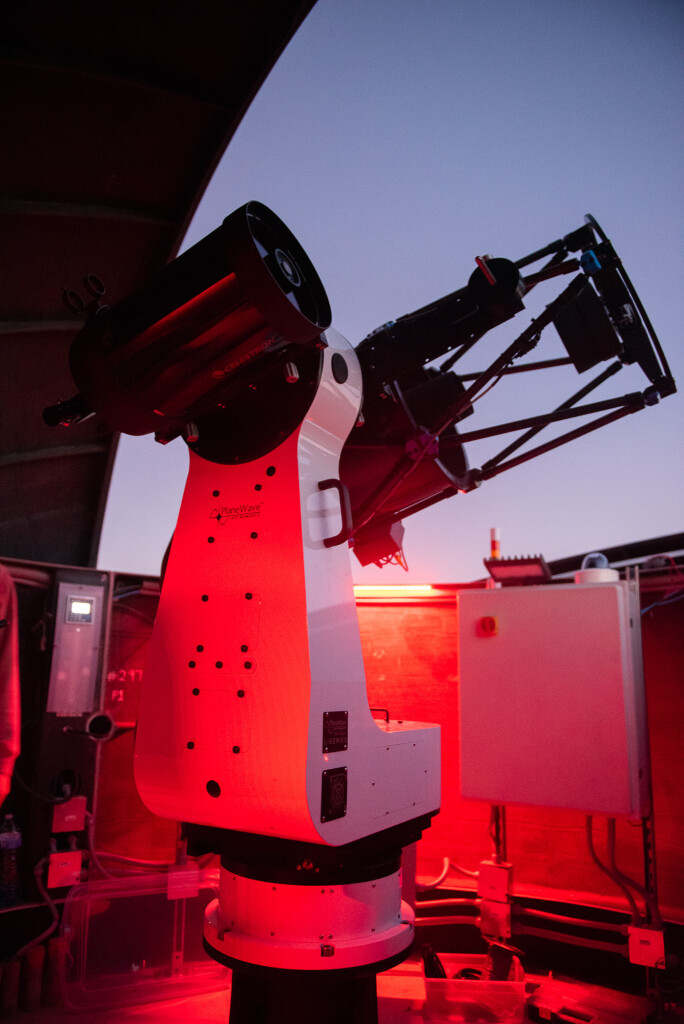 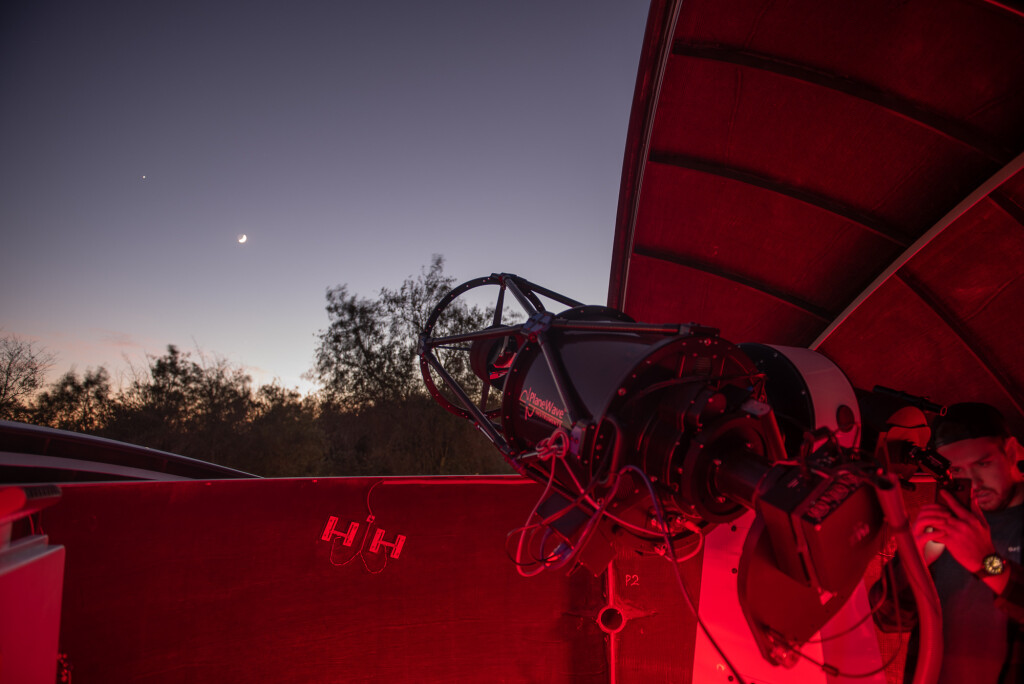 Our Soka University did a story on the telescope and how we have been using it for classes in the Spring 2020 semester. This semester was disrupted by the COVID-19 pandemic, but thankfully since the telescope could be used remotely, I was able to have many of our students access the observatory over the internet from their homes.  Here is a copy of that story from the SUA website, which was posted on June 8, 2020. The link for that story is:

Soka’s global vision is going intergalactic. The Luis and Linda Nieves Observatory gives Soka students—and astronomers around the world—access to powerful tools to study the cosmos.

The observatory, made possible by a gift from the Luis and Linda Nieves Family Foundation, features an advanced research-grade telescope that allows for the viewing of galaxies, nebulae, and other celestial bodies with precision. Observatory Systems of Pasadena, California, designed the observatory system using the latest telescope mount technology from PlaneWave Instruments of Compton, California. The remote operating system can be used by researchers and students from anywhere in the world. 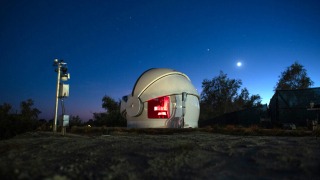 Bryan Penprase, dean of faculty and professor of astronomy, is a member of the Caltech-led group GROWTH (Global Relay of Observatories Watching Transients Happen), and looks forward to using the Nieves Observatory to connect Soka students with the group’s resources and expertise.

GROWTH’s network includes telescopes in the United States, India, Sweden, Taiwan, Japan, Israel, Germany, the United Kingdom, and Australia. “The sources that are discovered here in California can then be tracked by other telescopes around the world after sunrise in California,” Penprase said. “It allows a global community of astronomers to work together, and since here at Soka we’re so interested in global citizenship, I recognize that group to be an especially rich environment for our students to begin collaborating with astronomers from around the world.”

Soka students Taiga Morioka ’21 and Jett Facey ’21, who helped Penprase and Observatory Systems install the observatory, are co-authors with Penprase on a paper concerning a transient nova that is nearing publication in the Astrophysics Journal.

The “Sky Pavilion,” Penprase’s nickname for the observatory and its foundational platform, is located by the basketball courts on the western edge of the Soka campus, adjacent to the expansive green space of Aliso and Wood Canyons Wilderness Park.

The setting, which provides clear viewing conditions shielded from Orange County’s urban light centers, has also upgraded the experience for Soka astronomy classes. And the remote control features were especially handy after students were forced to leave campus in March because of the COVID-19 pandemic.

For instance, Rodas Bekele ’21, a third-year student from Addis Ababa, Ethiopia, was able to operate the telescope from Raleigh, North Carolina, where she is staying with her uncle’s family.

One of Bekele’s projects in “Astronomy 120: Earth’s Cosmic Context—The Discovery of Other Earths and the Origins of the Universe” was to capture an image of M81, a galaxy about 12 million light years from earth. So on several nights after the sunset in Aliso Viejo—later in the evening in North Carolina-—Bekele connected to the Nieves Observatory via the internet, set the coordinates for the galaxy and opened the camera’s aperture for several minutes. Her first results underwhelmed her.

“Honestly, when I started the class,” said Bekele, “I imagined when I looked through the telescope it would be like the pictures we see online, like the really colorful pretty galaxies, but it was literally like a dot.”

After experimenting with longer exposures and then running the results through computer software to adjust the color mix, Bekele, whose Soka concentration is Environmental Studies, produced a final image that Professor Penprase said, “shows wonderful detail in the spiral arms of M81 and reveals the structure of a beautiful face-on galaxy.”

Another class project singled out by Penprase was by Daniel Navarrete-Toulet ’21, who blended blue, green, and red images of the M51 galaxy to show its “true color.”

Navarrete-Toulet, a third-year Social and Behavioral Sciences student from San Diego, said he was immediately transfixed by the project, staying up to nearly dawn working on the image. M51, a spiral galaxy 23 million light years from Earth, is in optimal position for viewing from Aliso Viejo in the 3 a.m. hour. Navarrete-Toulet focused on the galaxy and set the camera to capture light for 10 minutes for each of the colors. He then spent another 45 minutes adjusting the mix until he had it right.

“You don’t know what they’ll look like put together,” Navarrete-Toulet said, “but after that you get this magnificent little thing.”

The astronomy class was one of Navarrete-Toulet’s favorites this semester; so much so that he got permission from Penprase to use the telescope during his free time. And during Soka’s spring semester finals week last month, Navarrete-Toulet was connecting to the telescope late at night to work on his final project, studying evidence of planets in other solar systems by observing dips in the brightness of stars. It’s a relatively new method of study, and Navarrete-Toulet said he feels fortunate to have the opportunity at Soka.

“It’s really quite marvelous,” he said, “that something that we wouldn’t have been able to do 20 years ago anywhere, we’re doing today in an undergraduate setting.”