When based in Singapore at Yale-NUS College, Dr. Penprase convened a group of astronomers from across Asia and North America to meet in Singapore to discuss the creation of a network known as the Global Observatory Network for Solar System Observation. This conference included a day at Yale-NUS College (with a clinic for Jupiter Imaging by Chris Go, and a mission briefing on NASA’s Juno space craft by JPL’s Glenn Orton). The second day of the conference included presentations from leaders of observatories in Turkey, Malaysia, Thailand, India, California, Korea, and Taiwan.

During our January 2015 meeting we had two sessions. This first session was entitled Observations from a Coordinated Network of Asian Observatories to Support the Juno Mission and other Space Exploration Missions.  The second session on January 9 was part of the NUS ICCP9 conference, and was entitled Global Observatories and New Discoveries in Time-Domain Astronomy and Astrophysics. This session featured presentations from Caltech’s Palomar Transient Factory team, as well as presentations from the leading observatories in Asia located in Korea, Thailand, Taiwan, Turkey, India and Malaysia. This started some collaborations which have continued and also led to some interesting other projects at Caltech.

ZTF and the NSF-funded Global Relay of Observatories (GROWTH)

During May of 2015, Dr. Penprase was part of the scientific team that wrote a $5.02 million proposal to the NSF-PIRE program to create a global network of observatories known as GROWTH – the Global Relay of Observatory for Watching Things Happen. The PI of that effort is Mansi Kasliwal, and the program includes innovative educational features such as a Distributed Online Collaborative Course (DOCC) in observational astronomy that involves multiple liberal arts colleges and universities across the earth, as well as exchange programs for students in the form of international research internships and international collaborations for postdocs and faculty. The figure below is from the GROWTH proposal and illustrates the network of global telescopes proposed within the project. From 2016-2020, the GROWTH team has been meeting to operate coordinate research to find optical counterparts to gravitational waves, to study newly discovered novae and supernovae, and other fascinating projects. Dr. Penprase led the educational side of GROWTH in its first years, before administrative work at Soka University required him to step back from the project in 2019. Despite being fully involved as Dean of Faculty and now Vice President at Soka University, Dr. Penprase is still conducting research with many of the astronomers in the project and looks forward to using the new Soka University Observatory with global teams of astronomers investigating newly discovered novae, supernovae and asteroids! 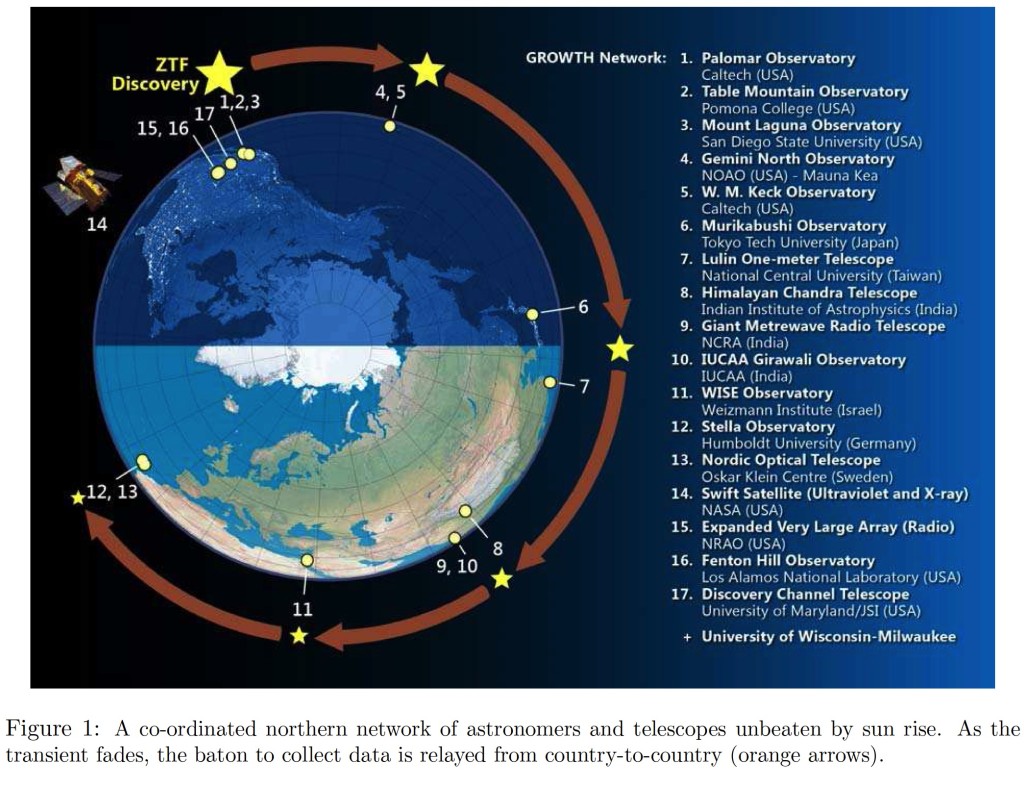 Dr. Penprase also was a co-I of the Caltech Zwicky Transient Factory (ZTF) proposal, which received $8.98 million in August of 2014 for working on a new system at Palomar Observatory for discovering transients – supernovae, gamma ray bursts, variable stars and new asteroids. As part of that effort he led an Undergraduate Astronomy Institute at Caltech during the summer that brought together undergraduate researchers contributing to the ZTF project.

From the combination of GROWTH and the international partners of ZTF we have created a really exciting team to work together on new instrumentation and discovery of astrophysical sources.  These projects have provided exciting new opportunities for discovering new sources in the sky and building an international networks of telescopes to provide follow-up observations to help characterize the nature of these new astrophysical objects.

Partly for historical interest, I include the schedule of presentations from the Yale-NUS meeting on global observatories from January 2015  below.

Presentations from the ICCP9 meeting at NUS “Global Observatories and New Discoveries in Time-Domain Astronomy and Astrophysics” – NUS, Friday, Jan. 9, 2015.

3:30PM-4:00PM Dr. Bryan Penprase – “Next Steps – Projects, Coordination, Software and Targets for a Global Telescope Network in the coming year.” (Discussion – whiteboard showing ideas for “Next Steps” and “Aspirations” for our Asian network of telescopes) – next.steps